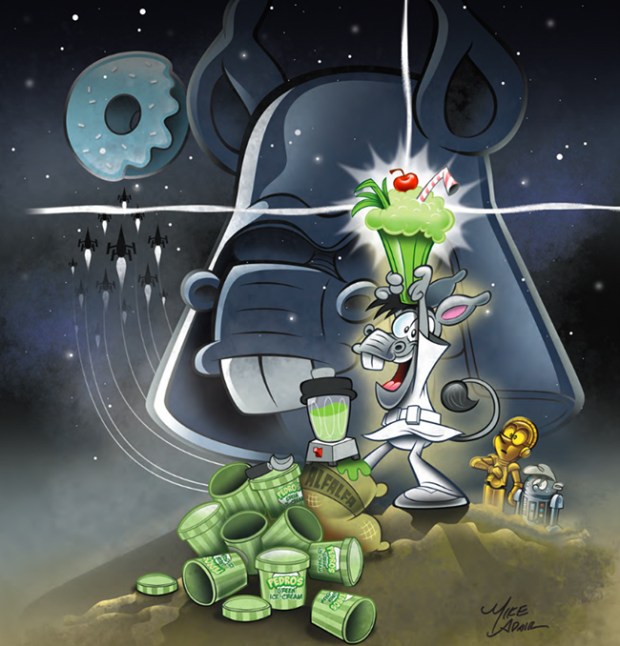 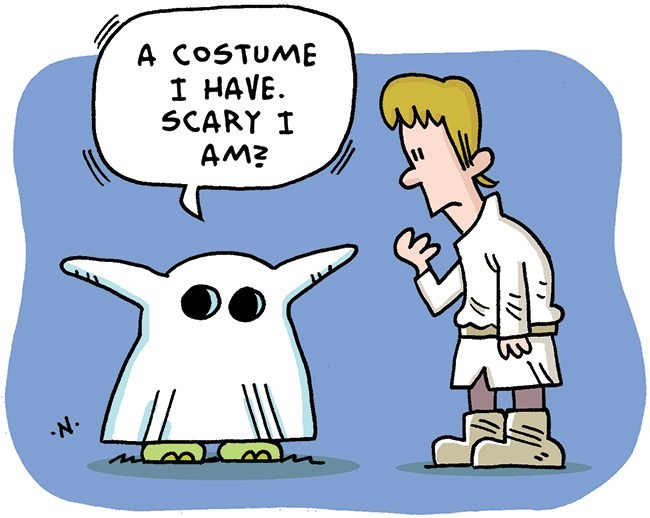 Ronan: Why are there no stairs in the Death Star?
Kevin: Why?
Ronan: Because everyone uses the ele-Vader.

Hayden: What kind of car does a Jedi drive?
Jake: I don’t know.
Hayden: A Toy Yoda. 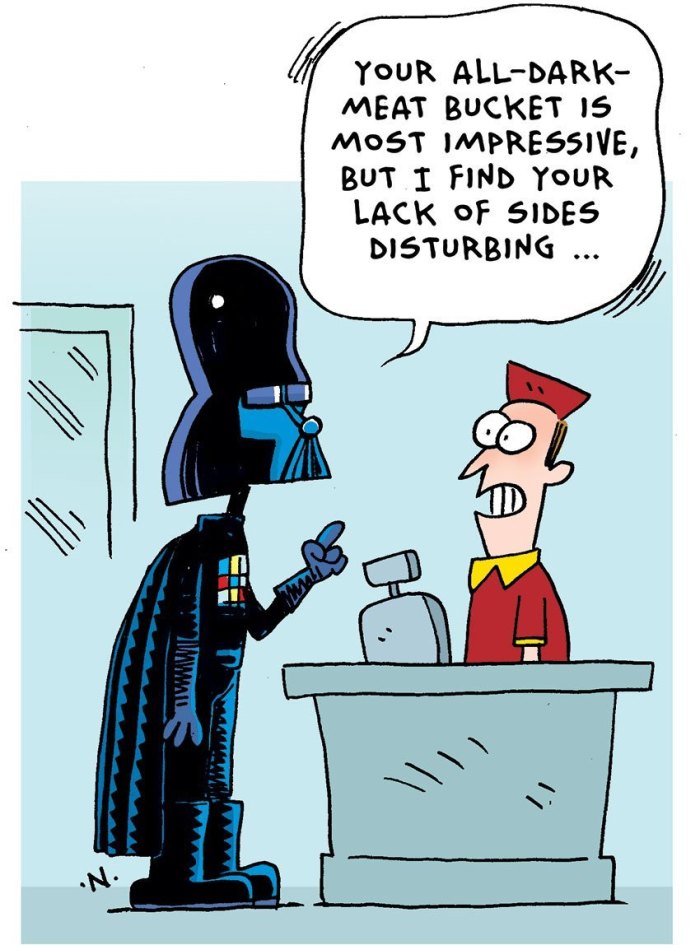 Wesley: What did Obi-Wan say at the rodeo?
Ethan: Tell me.
Wesley: “Use the horse, Luke!”

Before going away on another adventure, Goldilocks first stopped at Yoda’s house.

Goldilocks said to Yoda, “I’m leaving on my new adventure.”

Yoda said, “Wherever you go, may the porridge be with you.”

Matthew: What does a Star Destroyer wear to a wedding?
Daniel: What?
Matthew: Bow ties, of course! 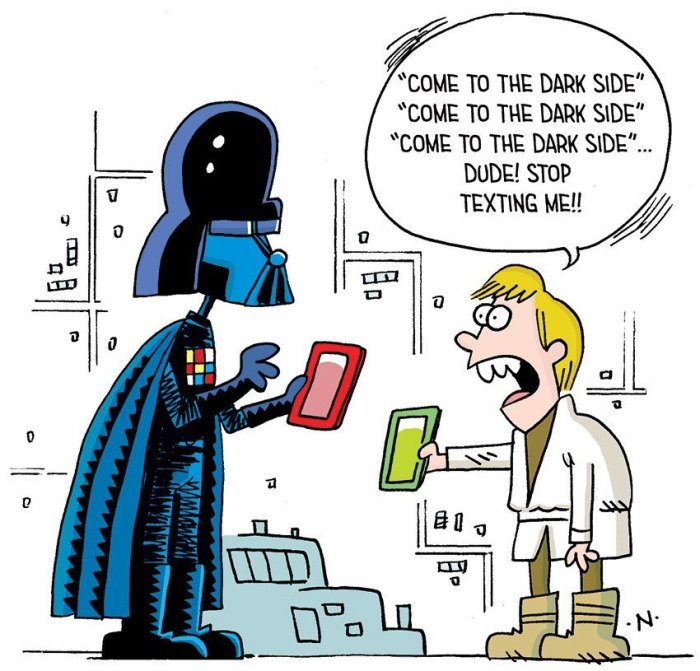 A book never written: “How to Swing a Lightsaber” by Jed Eye. 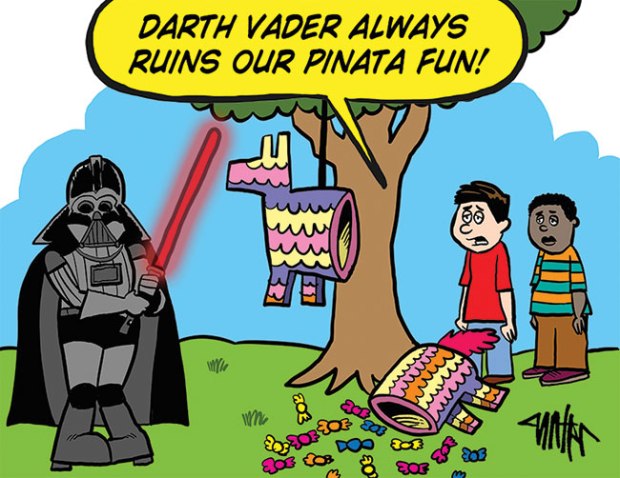 Savannah: What’s the most popular Star Wars movie in Italy?
Serena: Which one?
Savannah: The Phantom Venice.

John: Did you hear about the Star Mars movie with an invisible droid?
Josh: No. What did they call it?
John: C-through-PO! 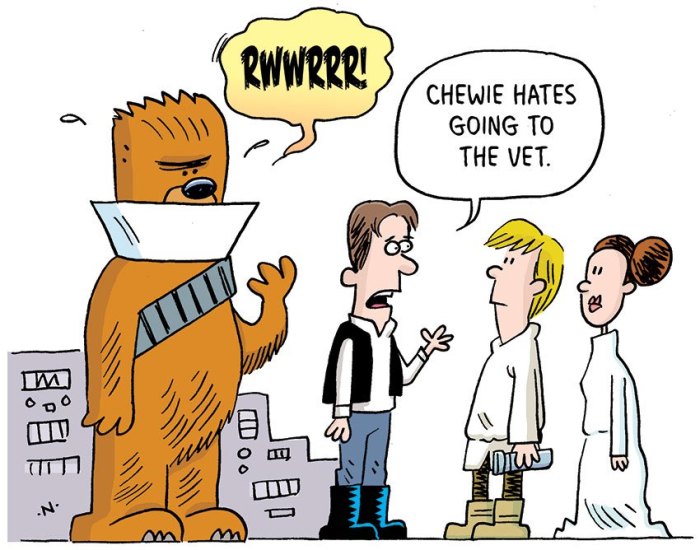 Luke: Which program do Jedi use to open PDF files in Star Wars?
Han: Which one?
Luke: Adobe-Wan Kenobi! 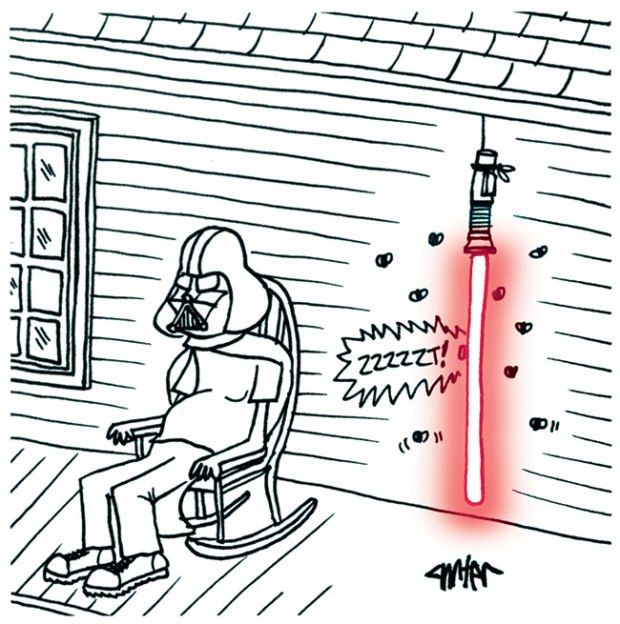 Luke: Why did Anakin Skywalker cross the road?
Leia: Not sure.
Luke: To get to the Dark Side. 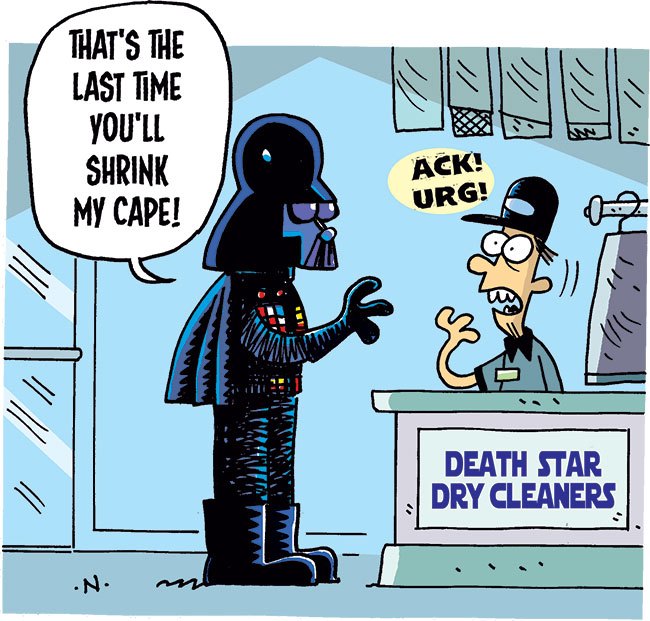 Bill: What do you call a bird of prey with a thousand lives?
Bob: Tell me.
Bill: A millennium falcon! 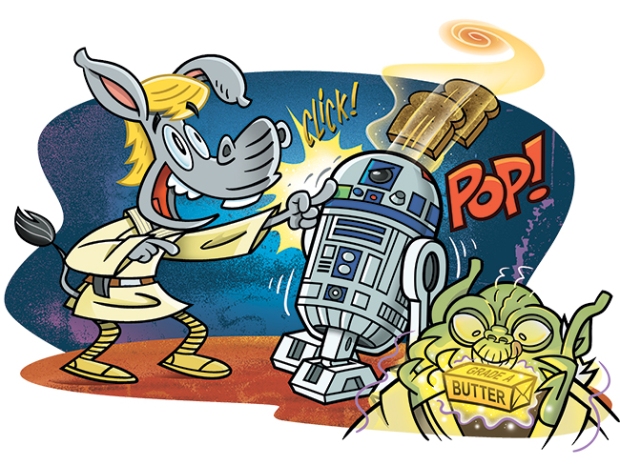 Deena: Why was the droid angry?
Mark: Why?
Deena: People kept pushing its buttons. 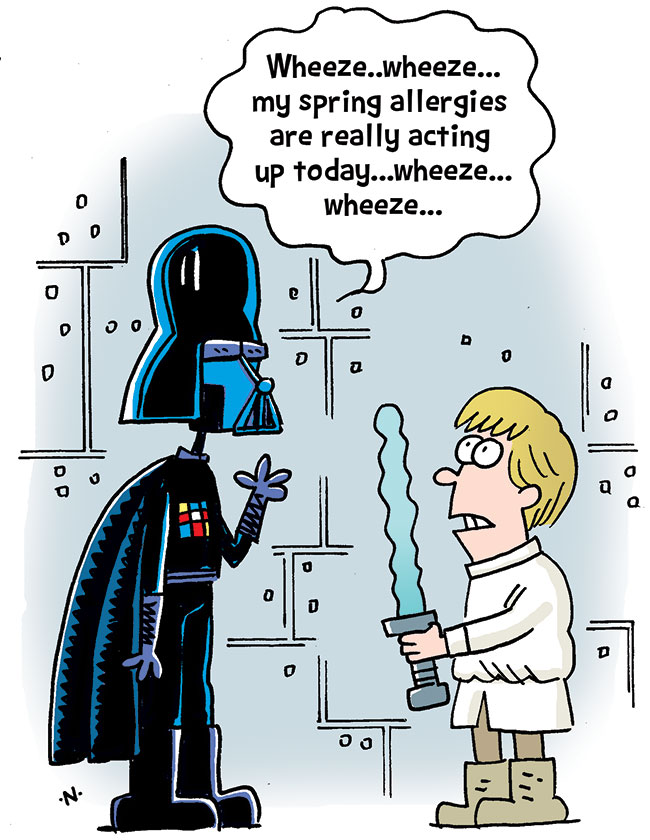 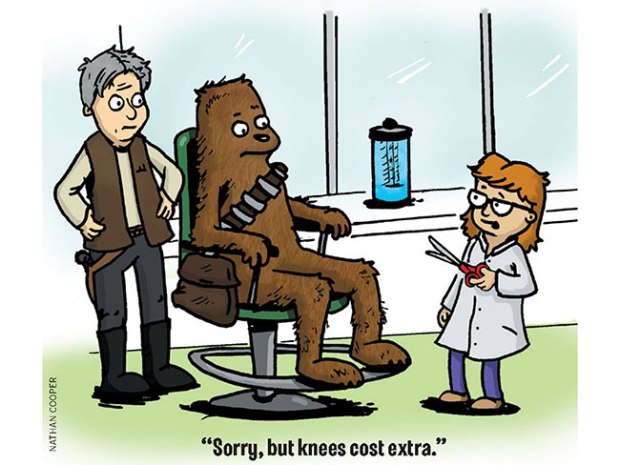 Daffynition: Lukewarm— A Jedi who can’t find the thermostat. 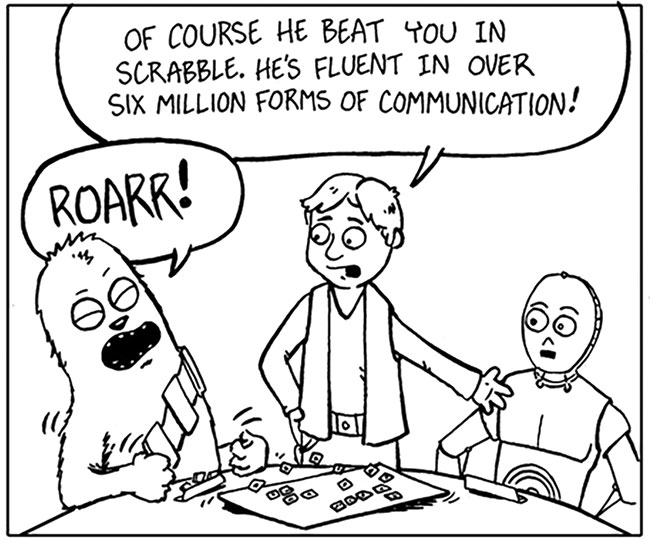 Sean: Do you know the internal temperature of a Tauntaun?
Ryan: No idea.
Sean: Lukewarm. 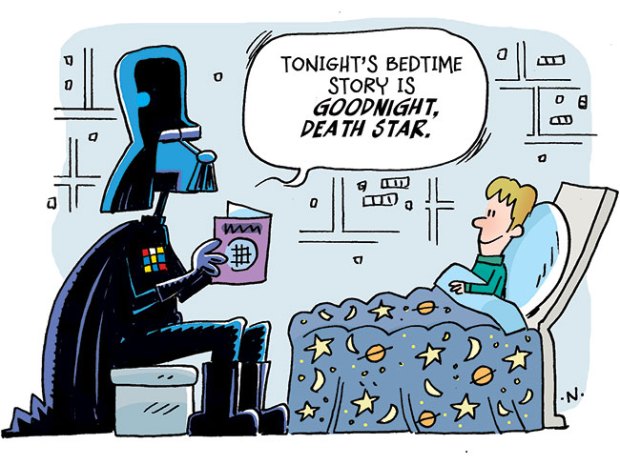 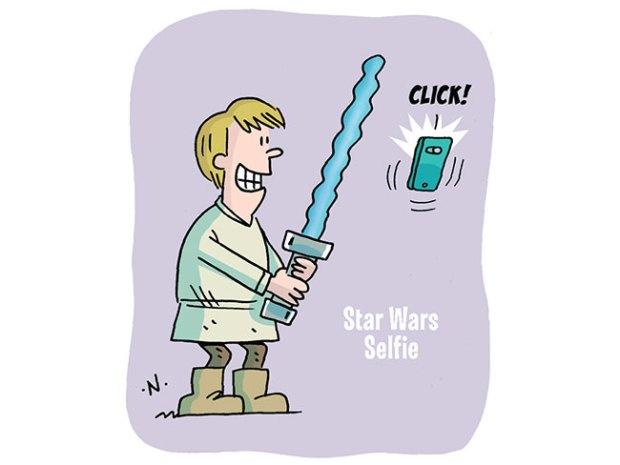 Zach: What do you get when you cross Darth Vader with an elephant?
Jack: What?
Zach: An elevator!

Jon: What is Jabba the Hutt’s middle name?
Emily: I don’t remember.
Jon: The. 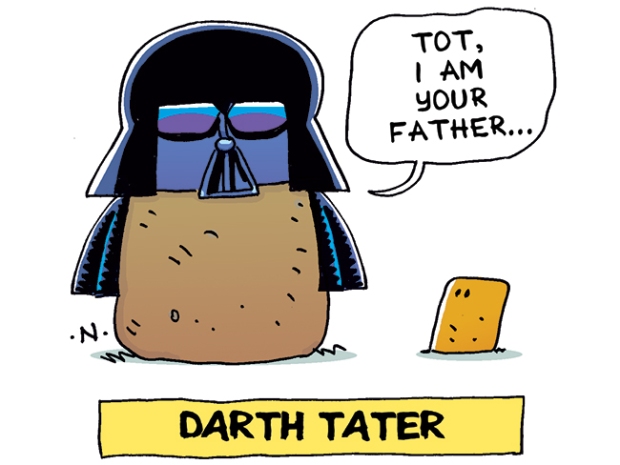 Pedro: What did Darth Vader say to the emperor at the Star Wars auction?
Chasen: What?
Pedro: “What is thy bidding, my master?

Zach: What do you get if you mix a bounty hunter with a tropical fruit?
Eric: You tell me.
Zach: Mango Fett! 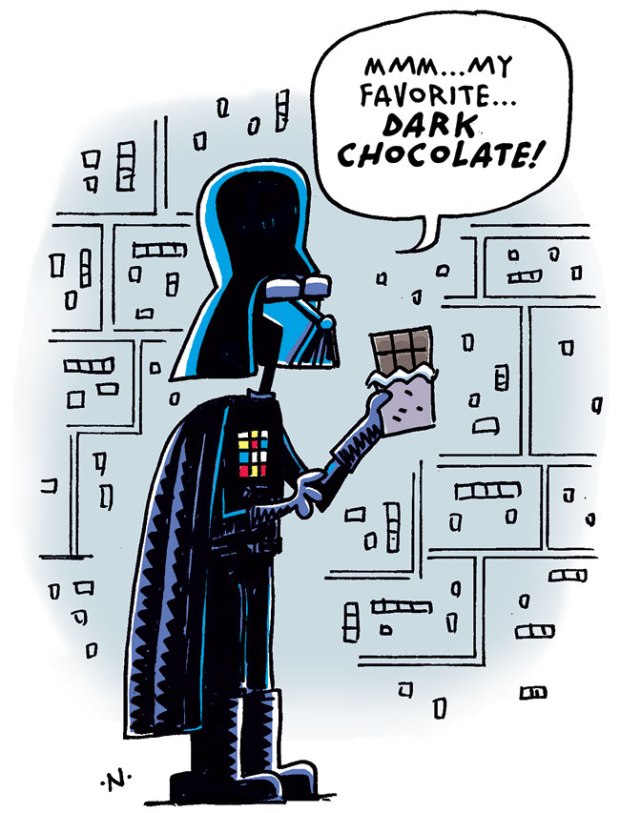 Zach: What do you call Chewbacca when he gets chocolate in his fur?
Connor: Tell me.
Zach: A chocolate chip Wookie!

David: What is a Jedi’s favorite toy?
Simon: I dunno.
David: A yo-yoda!

Bob: What do you call an evil procrastinator?
Rob: Beats me.
Bob: Darth Later! 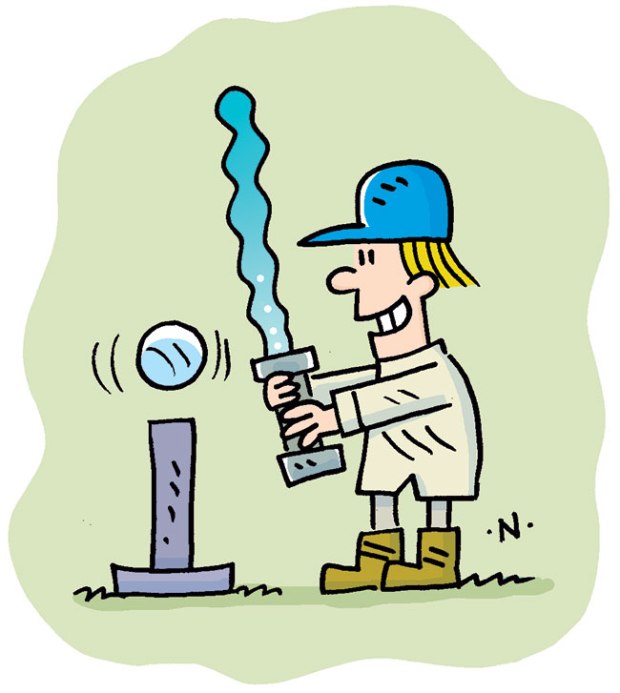 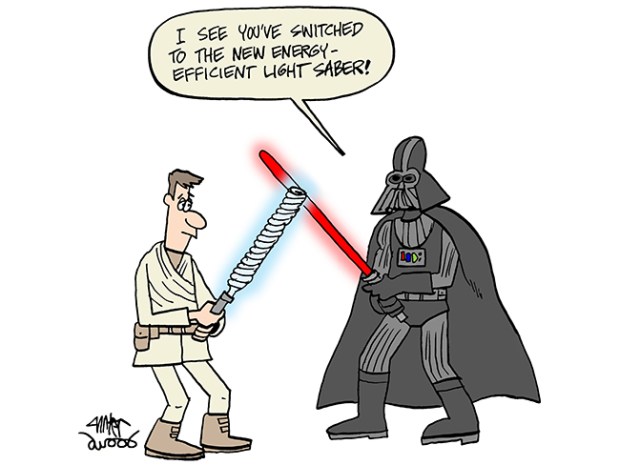 Travis: Where is the best place to shop for lightsabers?
James: Where?
Travis: The Darth Maul.

Parker: What do Jedis order at Chinese restaurants?
Scotty: That’s a tough one.
Parker: Pada-wonton soup! 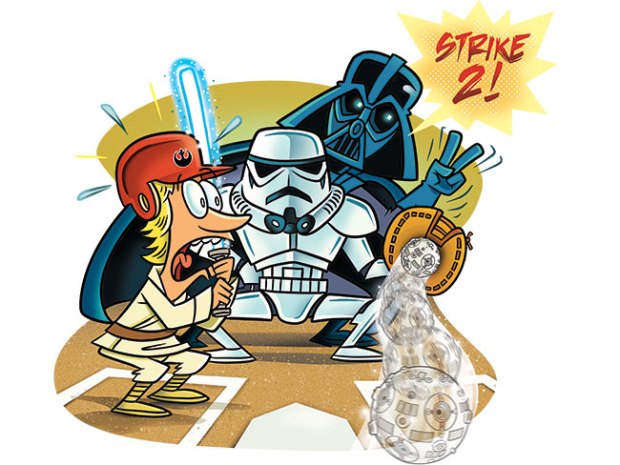 Hayes: What do you call a potato that’s gone bad?
Ben: Not sure.
Hayes: Vader Tots.

A book never written: “How to Talk Like Yoda” by Ajedi I. Am. 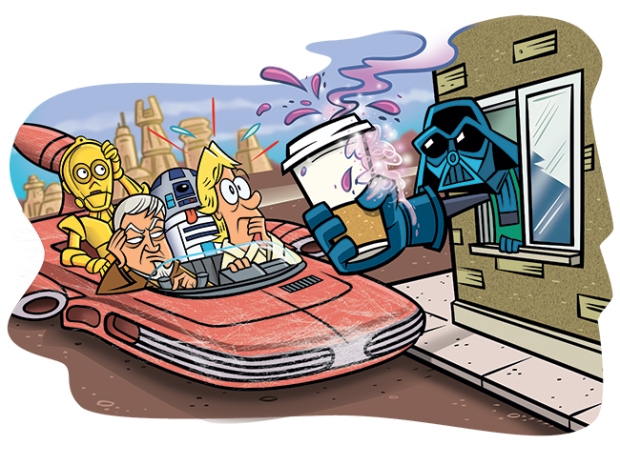 Dane: What kind of money do they use in space?
Louis: Tell me.
Dane: Starbucks.

A book never written: “The Force” by Jed I. Knight.

Do you know a funny Star Wars joke or pun? Click here to send in your joke.