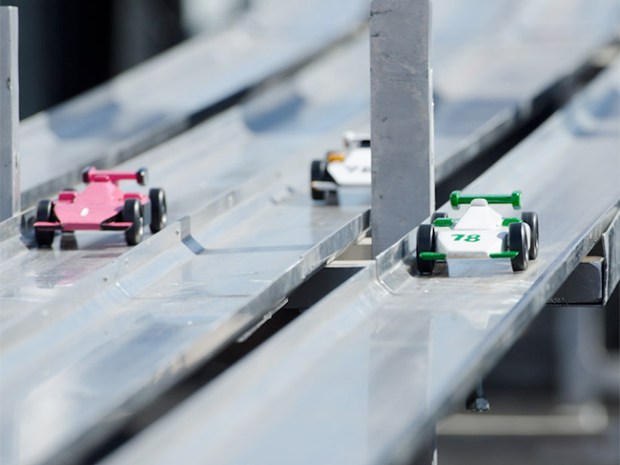 There are some questions that have plagued mankind since the beginning of recorded history:

While we can’t help you with the first two, here’s what we know about the third.

MAX OUT YOUR CAR’S WEIGHT AT 5 OZ

First, the basics: Your car should weigh as much as it’s allowed. In most races, a Pinewood Derby car’s weight is limited to 5 ounces. If your car weighs less than that, add coins or other weights.

As far as where you should attach those weights to your car … well, let’s just say opinions differ.

PUT MOST OF THE WEIGHT IN THE BACK

Science says the heaviest part of your car should be about 1 inch in front of the rear axle. The idea is that the farther back the weight is, the more potential energy you have because your center of mass is higher up on the track. (Don’t put it too far back, or your Pinewood Derby car will become unstable and pop a wheelie.)

Our expert says if you do this correctly, you will beat a Pinewood Derby car built exactly the same — except with the weight toward its front — by 4.6 car lengths.

That’s a lot of car lengths.

And you can’t argue with science, right?

PUT MOST OF THE WEIGHT IN THE FRONT

Well, we’ve heard from multiple field testers who claim that they’ve finished near the top of multiple Pinewood Derby races by placing the majority of their weight near the front of the car.

So where should you place your weights on your Pinewood Derby car? The ultimate answer is: It depends on who you ask. Our advice: Put your weight wherever you want, and spend most of your time polishing your axles. That’s a great way to reduce drag and increase your speed.