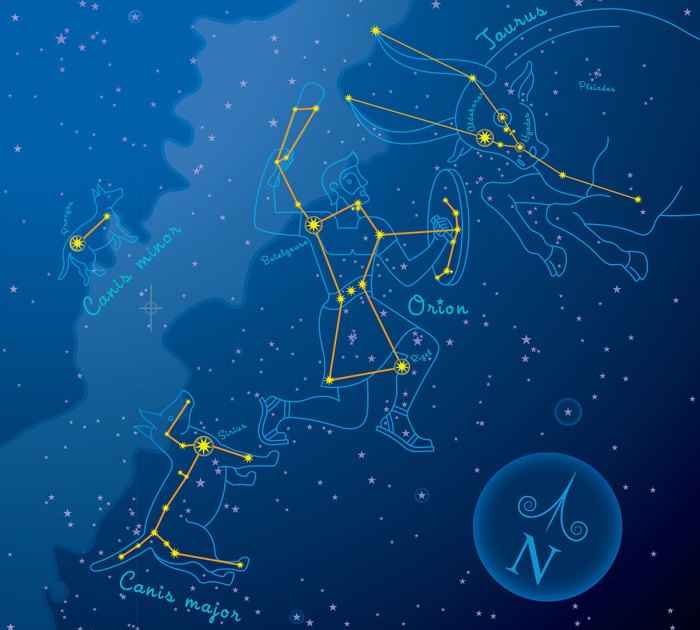 When you think of stargazing, you might picture yourself on a summer’s night, staring up from your sleeping bag at zillions of sparkling white dots above you. Well, viewing stars is even better in winter. If you don’t mind a little chill, the winter is a perfect time to explore the night sky.

Ancient peoples perceived the stars in patterns, what we call constellations. They represented the figures and tales from the ancients’ mythologies. Many centuries later, our maps of the night skies still preserve familiar constellation names. Lumbering overhead, for example, you’ll find Ursus Major, the big bear, and Pegasus, the winged horse, soaring through the night. Due to Earth’s motion, constellations move continuously across the sky. with different seasons. 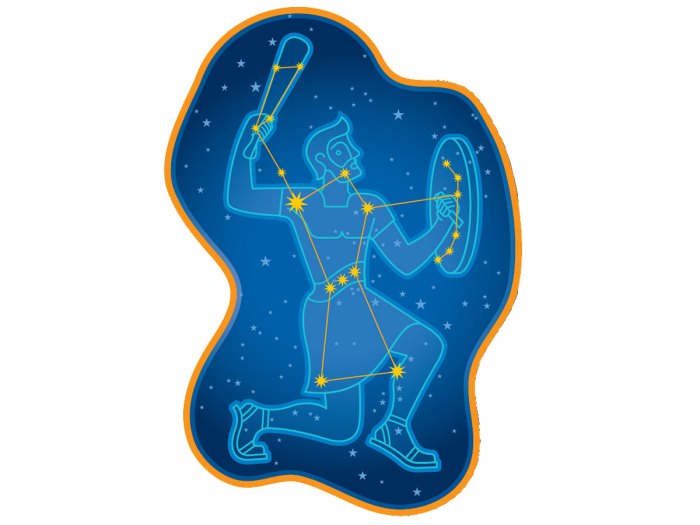 In winter, a good place to begin is Orion (see drawing), a giant constellation believed by the Greeks to be a bold and handsome hunter from their myths.

Orion’s seven main stars are very bright. To locate them, look low in the southeastern sky two or three hours after sunset. Find a rectangle with the three close stars in the middle. Together, these three stars form Orion’s Belt. They are called “pointer stars” because they can be used to find other constellations. The two brightest stars in Orion are blue-white Rigel (RYE-jul), which shines at the hunter’s left knee, and Betelguese (BET-el-jooze), a red star tthat marks his right shoulder. 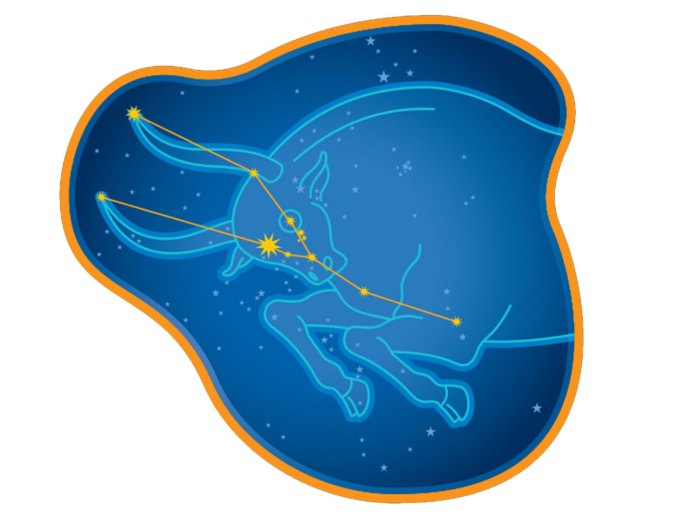 The Greeks also named nearby star patterns for figures in Orion’s story. (Yes, it required a little imagination.) They called a V-shaped constellation Taurus, the celestial bull that Orion pursues. 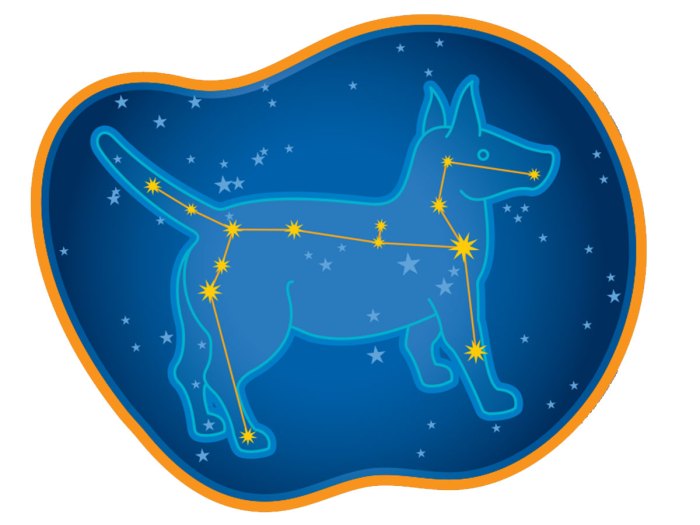 Canis Major, sitting at the hunter’s right heel, is easiest to find. Follow Orion’s Belt east, to your left, and toward the horizon. You will see Sirius (SEAR-e-us), or the dog star, just above the horizon. The brightest star in the sky, Sirius marks Canis Major’s eye, nose or shoulder.

Follow Orion’s belt to the west until you see the orange star Aldebaran (al-DEB-ron), the brightest star in Taurus and one of the bull’s eyes. Taurus also features two famous star clusters: The Pleiades (PLEA-a-dees), part of Taurus’s neck and the Hyades (HI-ah-dees), which form its nose. 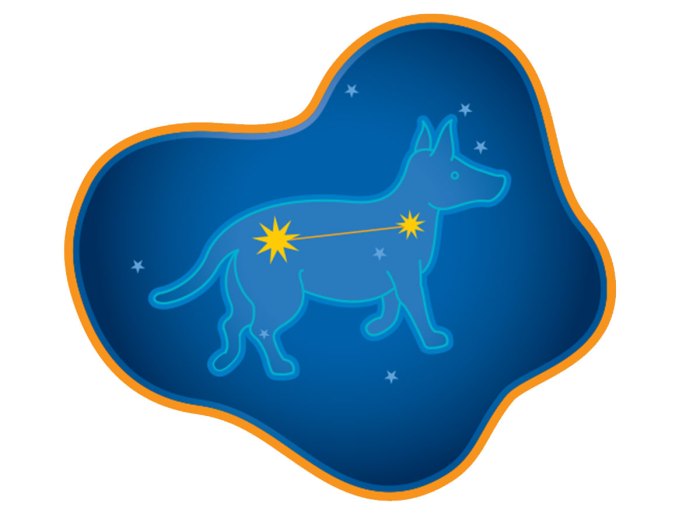 Finally, Orion’s other companion, Canis Minor, stands across from the hunter’s shoulders. Little dog is made up of just two stars, including Procyon (PRO-see-on), the eighth brightest in the night sky. Once you locate these four figures, they become your stepping stones to still other constellations. And not just in winter. Winter may be the most spectacular time of year for stargazing. But if you prefer the view from a lawn chair with a summer breeze blowing, there are great constellations in every season.

Share your celestial discoveries by having a star party! What’s that? Just what it sounds like—a gathering for people who like to stay up late looking at the heavens. A star party can be either simple or elaborate. Either way, a few basic preparations can make the difference between a ho-hum evening and a great adventure.

MEET ME AFTER DARK

First, pick the right time and location; the darker the night the better. A new moon—when there is no visible moon—is best for observing stars. For those who want a bit of moon and a dark sky, the best dates are usually three to five nights after the new moon when the crescent moon is low in the evening sky.

Your event also can be timed to coincide with a major celestial event, such as a meteor shower, a comet or an eclipse. If light pollution dims your view, get at least 50 miles away from a small town and 50 miles from a city. State parks and farms are good sites.

You’ll also get more out of your star party if you learn a little about astronomy and the heavens ahead of time.

Astronomy author Fred Schaaf suggests that each person learn about a particular planet, bright star or constellation, then share his knowledge with the others. You should also invite an experienced astronomer, so that you’re not literally wandering around in the dark. Museums, universities, astronomy clubs or even high school science programs often have people who are willing to share their expertise and telescopes.

Finally, telescopes are great, but not necessary. The unaided eye becomes a powerful tool on a dark night, as you look for meteors, planets, satellites and constellations. You can get a great look at fainter targets, such as moon craters or very distant star clusters, with a pair of good binoculars. Mr. Schaaf recommends a pair with a power of at least 7X50.