After a series of devastating storms, Cub Scouts, Boy Scouts and Venturers answer the call to help rebuild.

After a series of devastating storms, Cub Scouts, Boy Scouts and Venturers answer the call to help rebuild.

Scouts from Troop 365 in Round Rock, Texas, work together to clear fallen trees from Scout property in Rockport, Texas.

Matt Mohn’s neighborhood was not supposed to look like this.

As the Scout from Troop 584 in Katy, Texas, was evacuated by boat with his family during Hurricane Harvey late last August, Matt got a good look at the devastation around him.

“Places I’ve seen my entire life were completely under water,” he says. “It was horrifying.”

Less than a week later, Matt and his father paddled a canoe back to their house. The damage was catastrophic.

The furniture and floor were ruined. Everything was covered in grime. They would basically have to empty the entire downstairs — including the walls — and build it up again almost from scratch.

“We knew we had a long road ahead of us,” Matt says. 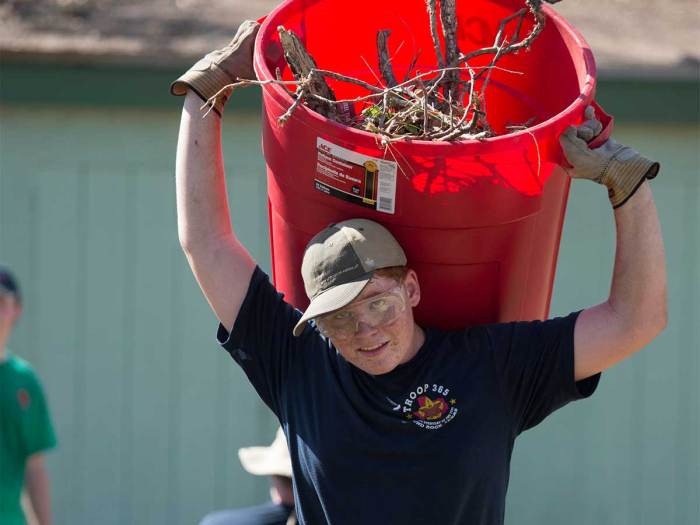 Ben Kucewicz from Troop 365 shoulders a load of debris.

The same could be said for his neighbors, and many other residents of his community. It was time for Troop 584 to spring into action.

Under the direction of 16-year-old Anshuman Patil, the assistant senior patrol leader of service, Troop 584 spent several days assessing the needs of members of their community as distraught residents began the long, slow rebuilding process after Harvey.

The 2017 Atlantic hurricane season was a busy one, with three major storms wreaking havoc in parts of Texas, the Caribbean and Florida.

In each case, Scouts from all over came together to lend a hand. 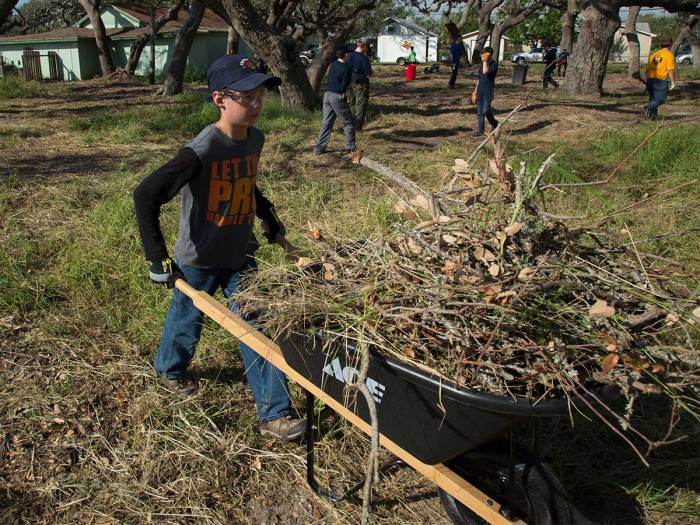 Sean Williams from Troop 365 in Round Rock, Texas, hauls off fallen limbs.

“I think it was the biggest turnout we’ve had for a service project in all the years I’ve been in the troop,” says Anshuman. “People could relate to how people were feeling after such devastation.

The 2017 Atlantic hurricane season included 10 major hurricanes, the highest number since 2005, causing more than $315 billion in damages. Nearly all of the damage was due to three storms:

Hurricane Harvey, with winds as high as 130 miles per hour, caused widespread flooding in the Houston, Texas, area, and dumped as much as 40 inches of rain over other parts of Texas over four days. U.S. landfall: Aug. 25 near Rockport, Texas.

“It was the least that we could do, and as Scouts it’s our duty to help others.”

While avoiding areas where contaminated materials were present, the Scouts did what they could to help their neighbors get back on their feet.

Troop 365 is based in Round Rock, Texas. Its community got a lot of rain but very little serious damage. A month after Harvey, the troop canceled a planned canoeing trip and instead spent a weekend clearing debris from a property used by Scouts for weekly meetings in Rockport, Texas.

“Because we remained unaffected, that left us in a great position to help those who were affected by these storms,” 16-year-old Jacob Burnside says. “We thought it was well within our ability to help those communities and get them back on their feet again.”

HELP FROM FAR AND WIDE

Scouts in Minnesota collected games and shipped them to Texas, where they were handed out to kids who had lost almost all their possessions.

Luke Zorn, a Cub Scout from Pack 132 in East Brunswick, New Jersey, was so concerned about people in the Caribbean after Hurricane Maria struck that region that he created a project called Lights for Puerto Rico. 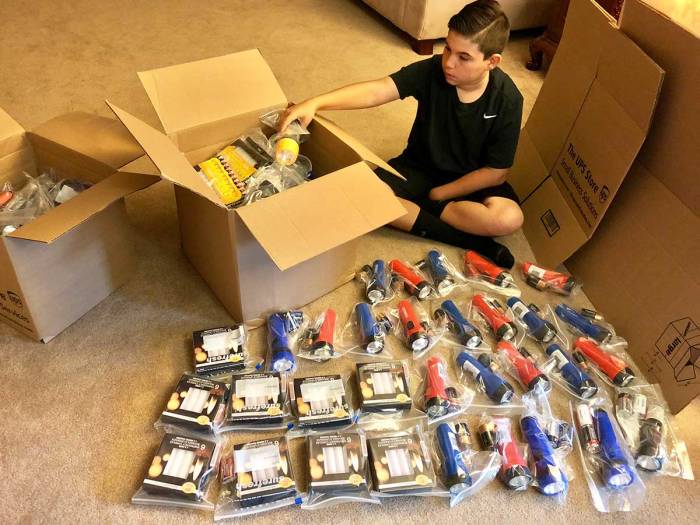 Luke collected flashlights, candles and batteries, and shipped multiple boxes to Puerto Rico, where officials predicted residents would be without electricity for months after the storm.

“I felt very sad, because I knew they weren’t going to have any power,” Luke says.

“I thought about how I would feel, and I knew I would be very scared and very nervous.”

Luke shipped the boxes to relatives in Puerto Rico, who handed them out to other residents.

LOTS OF WORK TO BE DONE

The members of Venturing Crew 914 in Islamorada, Florida, had to evacuate before Hurricane Irma in September. 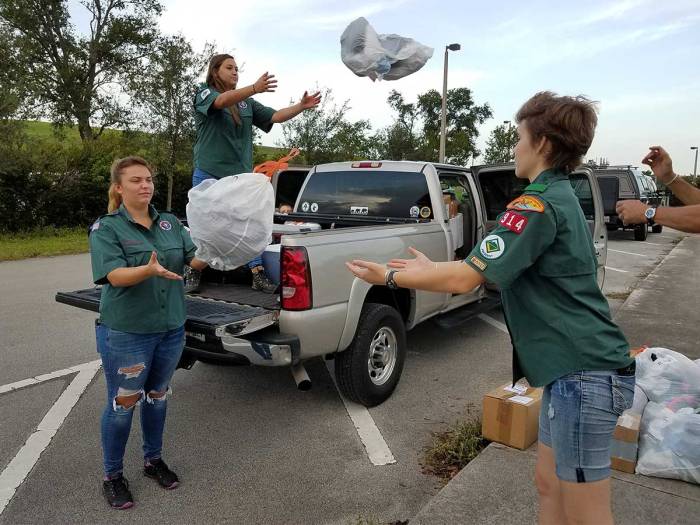 As soon as they were allowed back into the area, they got to work cleaning out their own houses. Then they got to work handing out supplies in the Florida Keys donated by Miami’s Cub Scout Pack 412.

Crew members decided to focus on providing residents with things they might need in the long term, not just immediately after the storm.

“But there are kids out there that have lost their school clothes. There are things that government agencies aren’t going to provide.”

The property owned by the chartering organization of Troop 357 and Pack 357 in Cutler Bay, Florida, was hit hard by Irma. 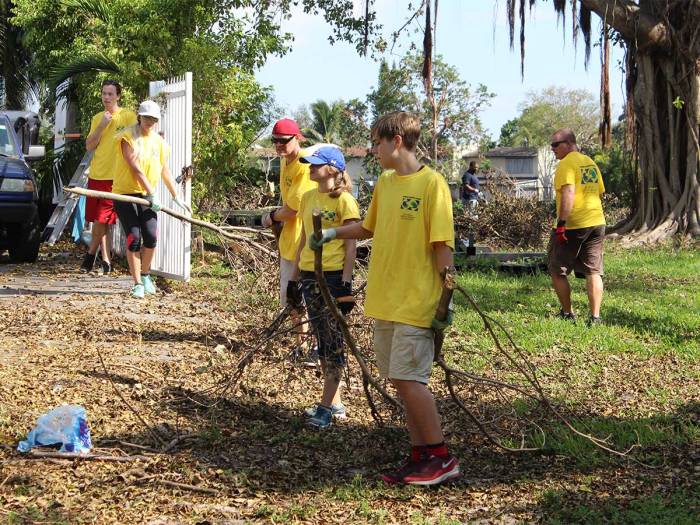 Downed trees and debris turned a nice open field into a disaster area.

The Scouts spent a long hard day in the sun clearing it out.

“When we first got there, it was pure chaos,” says Gabriel Couto, 17. “By the end of the day, it looked like a presentable outdoor space.

What to Do When Disaster Strikes

In the immediate aftermath of a natural disaster, there’s a fine line between being helpful and getting in the way.

In dangerous conditions, it’s best to let first responders do their jobs without interference from volunteers. Instead, contact a local church or charity such as the American Red Cross or the Salvation Army to find out what kind of help they need.

Only enter affected areas when safety can be guaranteed.

Electricity. Downed power lines and wet appliances should be considered dangerous until you know there is no electricity. If the lights are on in a building, there is a chance of electrical exposure.

Infections. Floodwater often contains infectious germs. Make sure your vaccinations are up to date, especially for tetanus. Wash and disinfect your hands frequently.

Mosquitoes. Pools of standing water are breeding grounds for mosquitoes. Not only are they annoying, but they can also carry dangerous diseases. Use insect repellent.

Hazardous materials. Floodwater could be contaminated by chemicals that might have been moved far from their original location.

Animals. Pets and other wildlife displaced by floods might be extremely stressed and could behave aggressively. Do not approach.