A swarm of those dragonflies might have carried off your tent.

Dragonflies still look much the same today, but they got quite a bit smaller over the course of 250 to 300 million years. Today, the largest dragonfly wingspans reach only about 6 inches. The world’s smallest dragonflies have wingspans of about 0.75 inches. 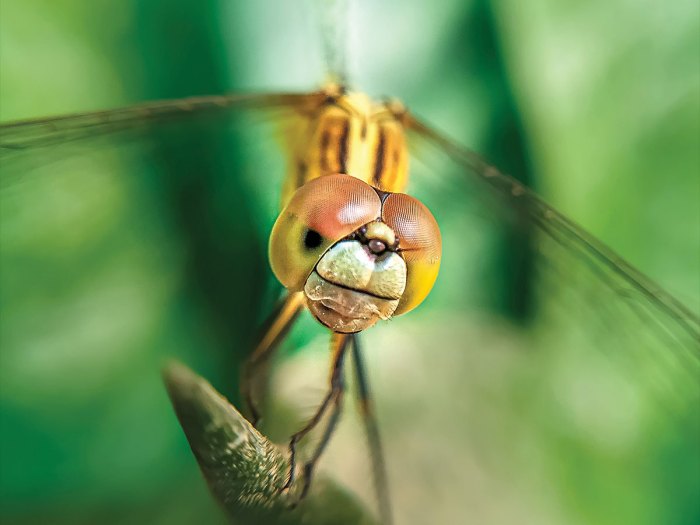 Dragonflies and their close kin, damselflies, are odonates (“odon” is Greek for “tooth”). There are more than 5,000 species of odonates, and they occur on all continents except Antarctica. About 450 types live in North America.

These insects have sawlike mandibles (mouthparts), which function like sharp teeth. Dragonflies are usually larger and stouter than damselflies — plus they hold their wings open while resting. The smaller, daintier damselflies close their wings at rest. 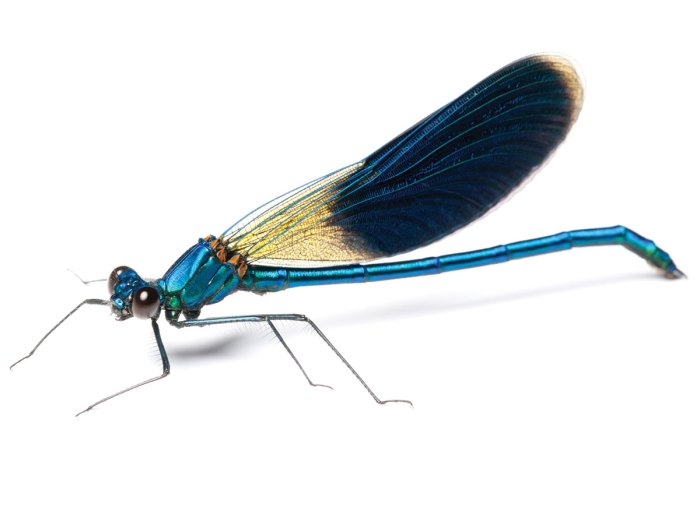 FROM WATER TO AIR

To find dragonflies and damselflies, look near water. Adult females lay eggs either at the surface of still bodies of water, on the ground nearby or on aquatic plants. Once the eggs hatch, the larvae start to grow. Dragonfly larvae are called “nymphs,” and they live underwater, breathing air through their gills. Nymphs eat aquatic insects, tadpoles and even juvenile fish. After they molt many times (taking months or even years), they finally turn into adult dragonflies. As adults, they might live only up to several months. 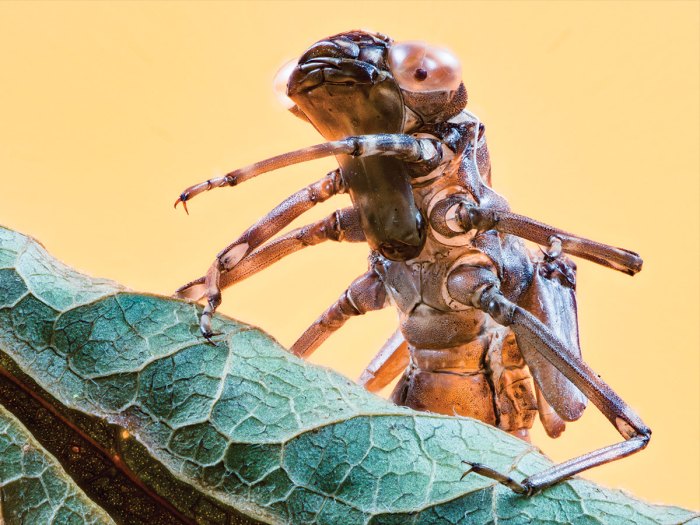 Empty skin of a dragonfly larva

Once the adults leave the water and take to the air, they become one of the fastest and most maneuverable fliers in the world. Larger species typically fly up to 10 miles per hour, but the fastest ones have been recorded at nearly 30 mph!

Moving up, down, sideways and even backward with ease, dragonflies are incredibly agile fliers (and are also great at hovering). They are such amazing fliers that scientists have been trying to mimic their wing design for tiny air vehicles that might help survey dangerous areas that can’t easily be reached from the ground. 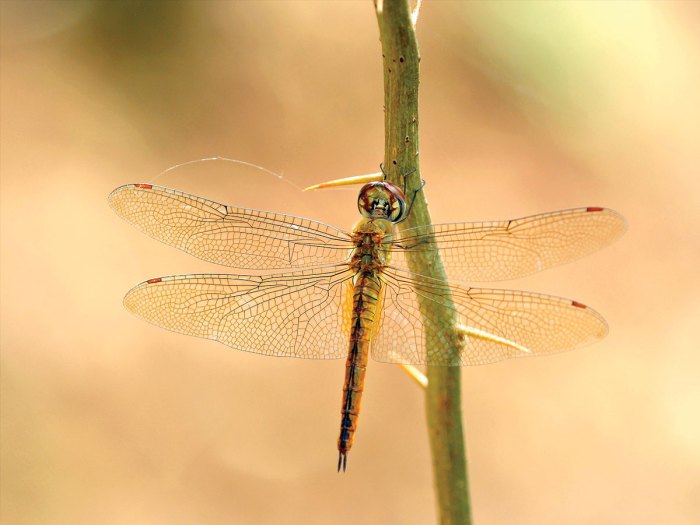 Of the migrating species (only 5% in North America), the wandering glider is the champion distance flier. They have been known to travel up to 4,400 miles!

FROM GREAT TO AWESOME

Unlike other insects that rely more on smell or touch, dragonflies rely almost entirely on vision. Their eyes take up much of their head, and they have tiny antennae to help determine air speed. A dragonfly’s compound eyes are made up of tens of thousands of small lenses, which provide exceptional, accurate vision for hunting prey (with nearly a 360-degree field of vision) and enable some species to see up to 40 feet. Dragonflies can see in color, and many also see ultraviolet and polarized light.

Dragonfly larvae are great hunters, but as adults, they are awesome. They have been documented catching their intended target up to 95% of the time! 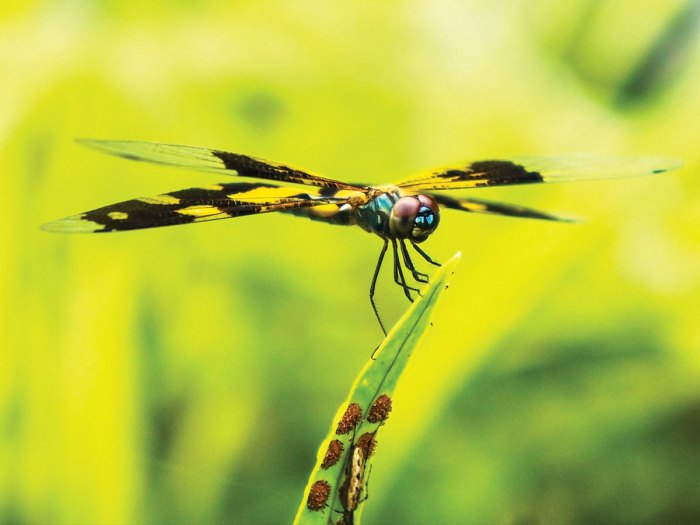 They eat flying insects, such as mosquitoes, butterflies, moths, flies and sometimes even damselflies. Keen eyesight, powerful wings and strong spiny legs help them grab and hold onto prey (which they almost always capture in flight) and make them formidable predators.

But dragonflies also have to watch out for predators. Nymphs might get eaten by fish, frogs, toads, turtles and birds, such as herons, ducks and kingfishers. Adult dragonflies in flight are most often caught by birds, although they sometimes get tangled up in large spider webs. 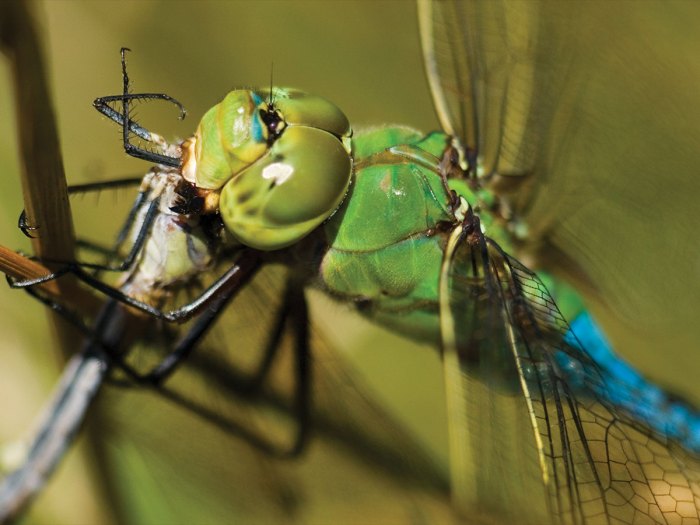 The common green darner can be found in every state.

Loss of wetland habitat is the main reason for decreases in numbers of dragonflies. If you have the space on your property, the best way to encourage these fabulous mosquito-eating insects to live near you is to create a small, permanent freshwater pond. A minimum size to attract dragonflies and damselflies is about 8 feet in diameter. Adding some native aquatic plants and some tall perches will entice them even more.

Bats and birds are their specialties, but wildlife biologists Mark Kiser and Selena Birgit Kiser love all species of critters. Both have worked for the State of Florida and previously worked for Bat Conservation International on such programs as the Great Florida Birding and Wildlife Trail and the North American Bat House Research Project.