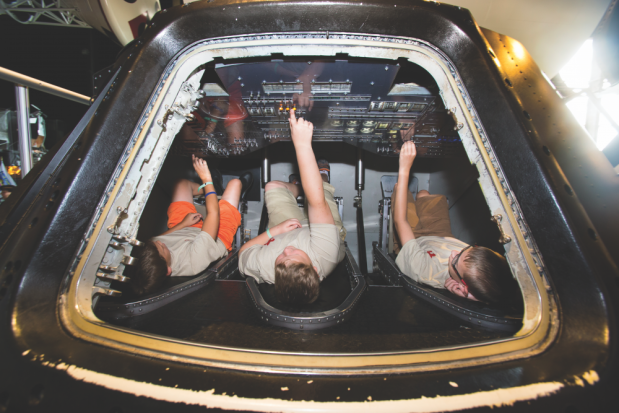 Lots of things can go wrong on a mission to outer space.

Without precise calculations, you could fly right through a star or bounce too close to a supernova, and that would end your trip real quick, wouldn’t it?

While that line from Star Wars might be an exaggeration, the Scouts from Troop 45 out of Pocahontas, Arkansas, learned about all the things that could really go wrong during a space mission while spending three days at Space Camp in Huntsville, Alabama.

“We actually learned how you have to operate if you’re on the International Space Station,” senior patrol leader Jade Sanders says.

In one scenario, Jade was playing the role of a director in charge of operations in Houston, Texas, where NASA’s Mission Control Center is located. He was managing a team of operators whose job was to make sure a space launch runs smoothly.

Talk about a lot that could go wrong. 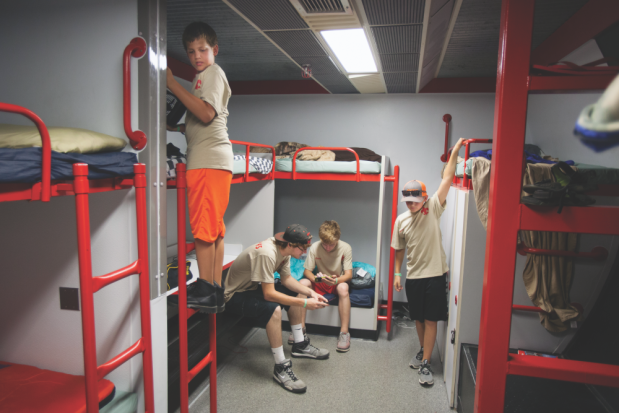 At one point, a light came on indicating a malfunction with the shuttle’s fuel tank. Later, on the shuttle itself, there was an issue with the oxygen supply.

“It’s a huge team-building experience,” Jade says. “It helps you bond with the rest of your troop.

“Any camp is a good place to do that, but [at Space Camp] they put you in scenarios where you have to work together to get stuff done.”

During NASA’s real-life Mercury, Gemini and Apollo missions (from 1958 to 1972), astronauts re-entered the Earth’s atmosphere in a small capsule. In an effort to Be Prepared, the astronauts had to simulate a situation in which the capsules were tumbling and spinning out of control.

“They swing you around every which direction,” Austin Crain says. “It was very disorienting. Then they’d ask you basic questions, like ‘Who was the first person on the moon?’ and it’s hard to answer them [after that].

“It tests your ability to focus.”

It’s the kind of experience that might prompt you to say, like C-3PO, “I’d forgotten how much I hate space travel.” 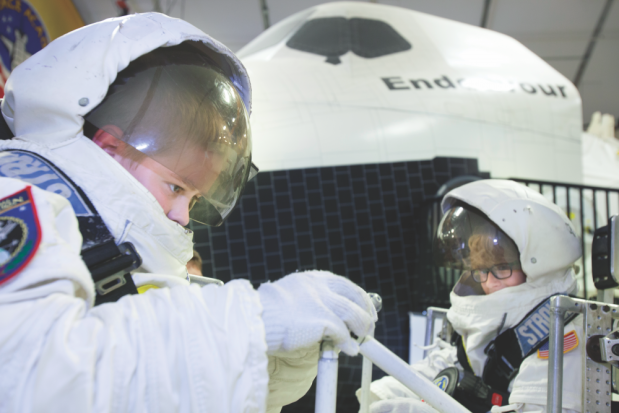 The Five Degrees of Freedom chair simulates a micro-gravity situation in which you might wind up moving in any of five motions: forward and backward; side to side; rolling all around; twisting back and forth; or dropping down in a head-first position.

“We were pushing off of objects and moving side to side,” Austin says. “And we had to do certain tasks while getting pushed back and forth and every which direction.”

Working in space is a lot like moving around with extra-heavy clothing in the snow. Things you take for granted here on Earth are much more difficult way up there.

But you know what they say in space: “Do or do not. There is no try.” 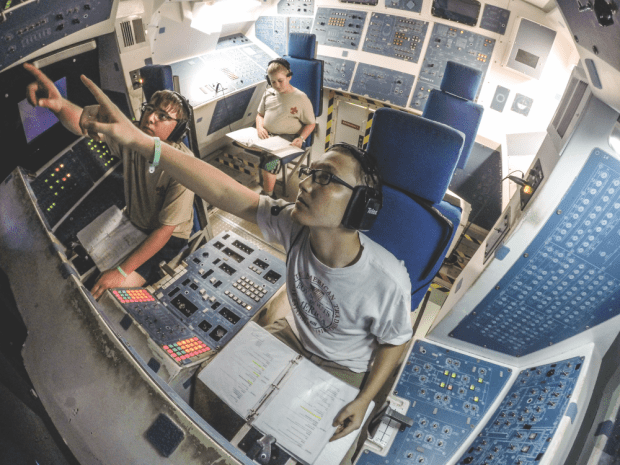 And then there are the just-for-fun activities.

The Space Shot is one of those straight-up-and-down, fast-paced rides that simulates a rocket launch. Riders go 140 feet straight up in 2.5 seconds, experience a few precious seconds of weightlessness, and then free fall most of the way down.

And the Mars Climbing Wall turns a regular indoor climbing wall into what a mountain on Mars would probably look like, without the toxic atmosphere.

The guys also built and launched rockets as part of the Space Exploration merit badge.

“That’s one that’s hard to earn if you’re just on a regular campout with your troop,” Jade says.

What you do: There are programs that focus on Space, Aviation and Robotics. Scout programs can work on merit badges at overnight, three-day or weeklong camps.

Have you been to Space Camp? Are you hoping to go soon? Let us know in the comments!

1 Comment on Space Camp Takes Scouts to the Final Frontier