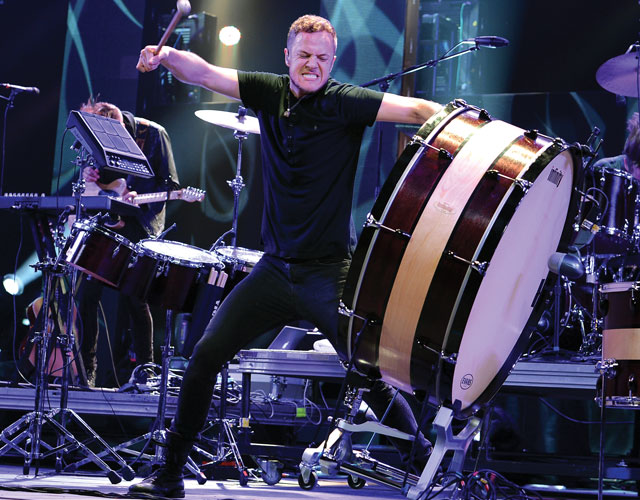 Hear audio from our interview with Dan Reynolds:

The spotlights go out, the crowds go home and the fog clears. It’s after midnight, but Dan Reynolds’ night is just getting started.

Reynolds, 27, is the lead singer of Imagine Dragons, the Grammy-winning band behind hits like “Radioactive,” “It’s Time” and “I Bet My Life.”

After electrifying another crowd — in places like Buenos Aires, Argentina; London, England; or Salt Lake City, Utah — Reynolds heads back to his hotel room and opens up his laptop to write songs.

He has been doing that since he was 14.

“I see it as my journal entry at the end of the night,” he says. “Rather than write a journal, I just kind of write my entry into a song.”

Most of the songs Reynolds writes will never be heard by anyone. He says he has written thousands of songs over the years, but only 24 have made it onto his band’s two studio albums, including the latest, Smoke + Mirrors.

Instrumental to His Success

Reynolds was born in Las Vegas, Nevada, where he became an Eagle Scout. He loved music right away. He took piano lessons, drum lessons and played saxophone in middle school.

All those music teachers, he says, helped him form a deeper connection to music. As for guitar, Reynolds taught himself to play through lots of frustrating hours of practice.

Reynolds listened to a lot of music, too, and says his favorite rock stars were guys like Billy Joel, Bono (lead singer of the band U2) and Paul Simon.

Reynolds formed Imagine Dragons in 2008, and the group found some small success early on. It won Brigham Young University’s Battle of the Bands that same year. But real fame didn’t come until four years later when the band released its debut album, Night Visions.

In those four years, Reynolds says, the band played in a lot of small clubs that didn’t pay much money.

“We were poor, living in a small house together for years,” he says.

But it was worth it. And he sees that as a lesson to other aspiring musicians: A tiny show for 20 people could be where you get your big break, so “never say no to a gig when you are just starting out.”

Just One of the Guys

Reynolds gives a ton of the credit for the success of Imagine Dragons to his bandmates: guitarist Wayne Sermon, bassist Ben McKee and drummer Daniel Platzman.

Everyone in the band is involved in songwriting. When Reynolds has an idea, he’ll sing it into a microphone connected to his laptop and email it to the band. Sometimes Sermon sends a catchy guitar lick, and Reynolds will write lyrics to match. Or maybe Platzman has a cool drum solo that the band turns into a song.

“I always feel like as a band we know what Imagine Dragons is better than any individual does,” Reynolds says. “If I were to select the songs, it wouldn’t be as good as all four of us selecting the songs.”

Reynolds has a big piece of advice for anyone thinking of a music career: Be yourself. Reynolds has lived that philosophy in his career so far.

“I was determined to be a musician and be myself and not have to sell out in any way of being something that’s not me,” he says. “Don’t just try to fit into the box that people say is rock ’n’ roll.”

Find your voice, he says, and the spotlight will find you.

“It’s always been about creating something that’s authentic, that’s real,” he says. “Rock ’n’ roll, to me, is you do whatever is real for you, whether it’s cool or not. And that’s what’s cool. To be cool is to be yourself.”

What to Expect: Start with lots of practice playing one or more instruments. And don’t just play the music your band director gives you. Learn to play some of your favorite rock or pop songs.

Job Outlook: Few will make it to the level of Imagine Dragons’ stardom, but if you combine lots of hard work with a little bit of luck, you’ve got a shot. Many musicians have other full-time jobs and earn extra cash playing on evenings and weekends.

Education: According to a recent survey, more than 80 percent of people working in the music industry have a college degree or higher.

Salary: Varies widely. A performer in the world-renowned Boston Symphony Orchestra makes $132,000 a year. A community orchestra might start you at $70 per rehearsal or performance. Rock bands get paid based on how many people attend the gig and the band’s reputation. You could make $75 to $125 or more per band member per gig.

Location: These five states (in order) have the highest number of working musicians: New York, California, Florida, Texas and Tennessee.

Love music but not performing in front of crowds? The music industry has a variety of careers for you. For example: