Cheer for Carli Lloyd, Crystal Dunn and Rose Lavelle in the FIFA Women’s World Cup. The global competition is in full swing until July 7!

Learn more about these superstar athletes below, and read to the bottom for a link to Team USA’s gameplay schedule. 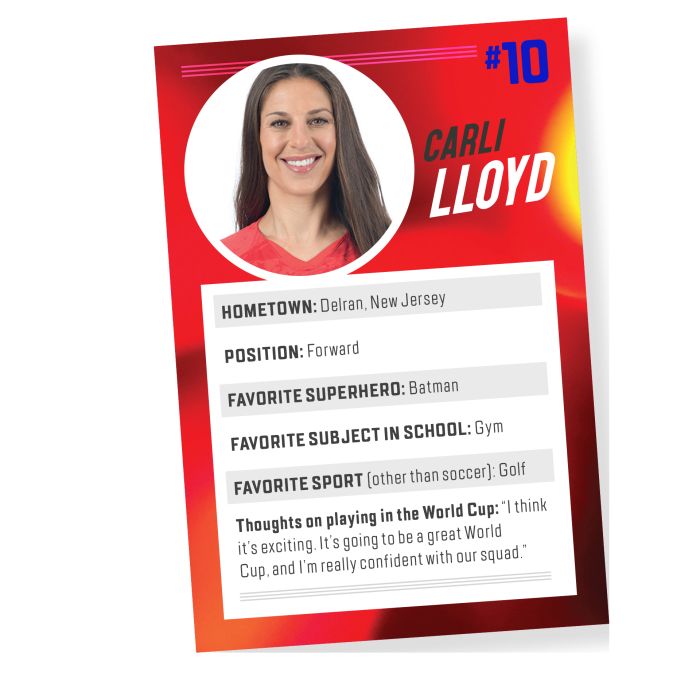 All three goals came in the game’s first 16 minutes.

A decade earlier, no trophy was on the line when Lloyd made her first appearance for the U.S. The team was up 6-0 when she entered as a substitute. The crowd size? A mere 3,500 people.

It’s hard to imagine now, but Lloyd says she was extremely tense as she ran onto the field that day in 2005.

“I just felt extremely exhausted and kind of started breathing heavy,” she says. “I just remember saying, ‘I don’t want to mess up.’ ”

Eventually, Lloyd learned to tune out those negative emotions. But like learning to curl the ball into the net, it took time and practice.

“I would say that the mental game is probably 90 percent, and the physical is 10 percent,” she says. “I think that everybody can do the physical part, to a point. But what separates one individual from another is the mental part.”

Mental confidence comes from being prepared. It comes from listening to your coaches, practicing hard and — when the day is done — spending time visualizing what you learned.

“That’s going home after you’ve trained something on the field and just thinking about it in your mind over and over again,” Lloyd says. “Eventually, your brain resets, and you

come out the next day and you’re doing it better.” Lloyd still tries to improve her skills every day. She refuses to simply ride the wave from her Most Valuable Player performance at the 2015 World Cup.

“You can’t take days off,” she says. “You can’t take practices and say to yourself, ‘I’m just going to take this one a little bit easier.’ In a blink of an eye, anybody can come and take your spot from you.

“People look at my World Cup performance and maybe think it’s a one-off. ‘How are you going to become better than that?’ I will. There’s no doubt in my mind. 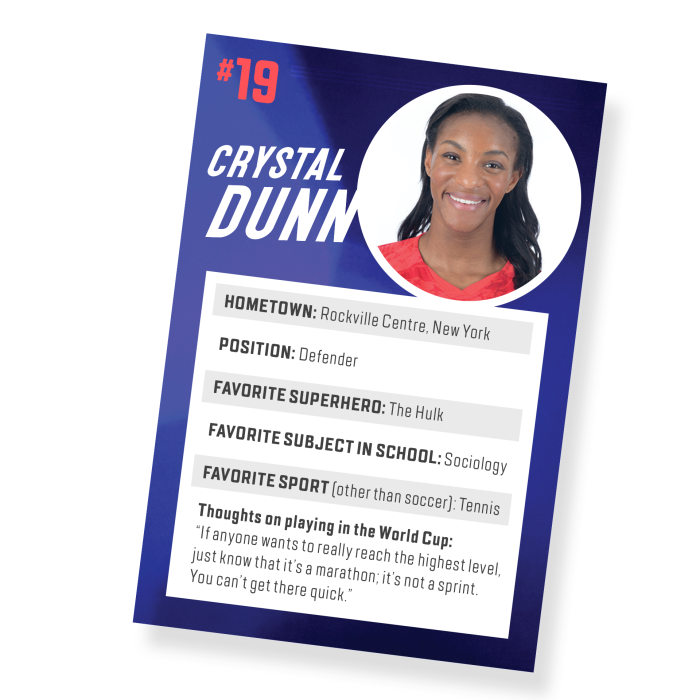 But really, is Crystal Dunn a defender, midfielder or forward?

Dunn has played every position for Team USA except goalkeeper. While it’s tough adjusting to each role, Dunn trusts her coach to make the right call.

“Ultimately, it is a team sport, and sometimes the game requires you to be in a certain position to help the team,” she says. “If you can move toward that idea quicker, it helps you in the long run.”

Dunn is a skilled scorer, but she’s found other ways to make an impact.

Next time you see a goal on TV, rewind the DVR a minute to study the buildup. Count how many players were involved in the attack.

“You can impact the game in so many ways,” Dunn says. “Maybe you’re the one that won the ball that then played it to someone who then crossed the ball and someone finishes.”

Dunn has played in games where she doesn’t start or even get subbed in. She admits it’s hard to watch the entire game from the sidelines, so she likes to repeat this mantra: “I know what I bring to the game.”

“Once you do get called into that game, you’re going to hit the ground running, and you’ll make an impact,” she says. “Whether you’re playing five minutes or 90 minutes, you ultimately want to say you made the team better when you stepped foot on the field.”

If Dunn sounds like the kind of player whose optimism uplifts an entire squad, her teammates would agree. In the locker room, she picks the music, leads the dances and spends time connecting with teammates.

“We’re fortunate enough to be playing a game for a living, and sometimes I have
to remind people we have it good,” she says. “We’re playing the sport we loved to play since we were like 4 years old.

“Yeah, we want to win; we want to prove that we’re the best, we’re the top team, but ultimately you have to have fun. You have
to enjoy it.”

First she saw, and then she believed.

Rose Lavelle was 9 years old when she traveled to Paul Brown Stadium in her hometown of Cincinnati, Ohio.

On this sunny October afternoon in 2004, she wasn’t there to see the stadium’s main occupant, the NFL’s Cincinnati Bengals. She was there to cheer on the U.S. women’s national soccer team.

From her spot in the stands, Lavelle watched icons of the sport like Mia Hamm, Julie Foudy and Kristine Lilly work their magic.

As the U.S. team scored goal after goal, Lavelle let her mind wander. She started to picture herself wearing the red, white and blue of Team USA.

“I was obsessed with them,” she says. “Seeing them play in my hometown, in person — I just remembered how much I wanted to be in their shoes someday.”

Ten years later, this was no longer a daydream. After impressing coaches and fans as a member of the under-20 women’s team, Lavelle was called up to the national team.

In 2015, at her first training camp with the top team, Lavelle and the other newcomers were called aside. Abby Wambach, who has scored more goals than any American in history (male or female), wanted to give them some advice.

“She said to the younger players, ‘This environment is super competitive, and it’s not that it gets any easier, but the people that are here the longest make it look easy.’ That really resonated with me,” Lavelle says.

Lavelle had two realizations. The other players are her teammates, but they’re also her competition for roster spots. And even if they don’t show it, they’re probably just as anxious as she is about making the team.

More than 40 women competed for the team’s 23 World Cup roster spots. And of those 23, at most 14 (11 starters and up to three substitutes) will play in any given game.