Sea turtles are some of the most ancient and fascinating creatures around, their oldest ancestor having shared Earth with dinosaurs 120 million years ago. Today, seven species of sea turtles roam the world’s oceans. Five of those species nest in the U.S. 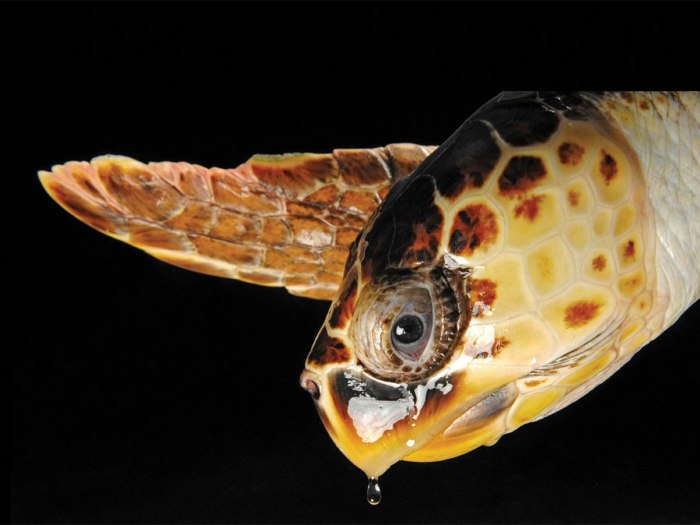 Found in the Atlantic, Pacific and Indian Oceans, loggerheads are the most abundant sea turtles in the U.S. Loggerheads are named for their large noggins, and their strong jaws help them eat hard-bodied mollusks, crustaceans and fish. Loggerheads are 2.5-3.5 feet long and typically weigh 155-375 pounds. 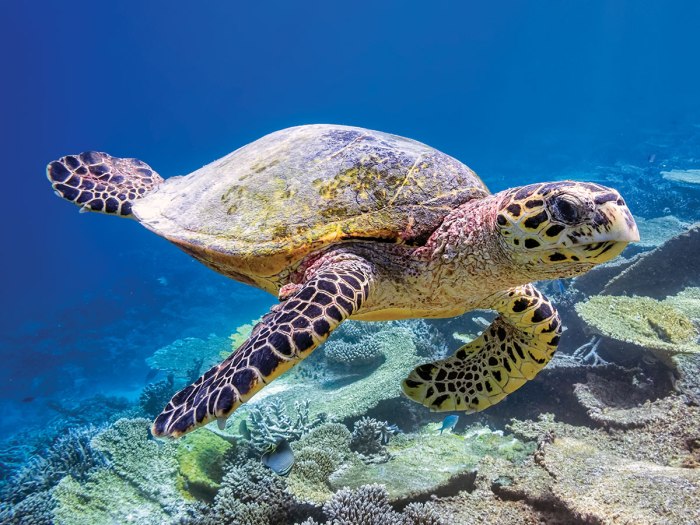 Green sea turtles are real globetrotters, nesting in 80-plus countries. In the U.S., they are mostly found in Hawaii and Florida. Green turtles start out life as carnivores but switch to a seaweed and seagrass diet as adults. They are 3-4 feet long and weigh 240-420 pounds. 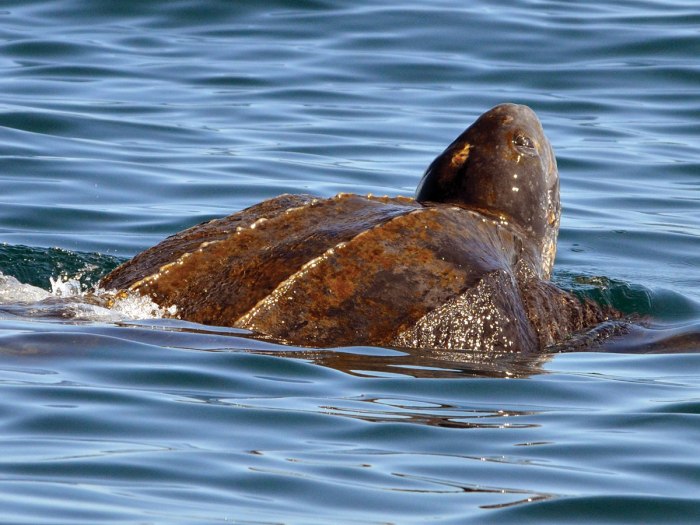 Leatherbacks are so different from other sea turtles that they’re in their own family. Named for their leathery skin, they lack a hard shell. As the largest turtles, they can be 10 feet long and weigh 2,000 pounds, but they’re usually between 4 and 6 feet and 660-1,100 pounds.

Leatherbacks travel the farthest of any sea turtles — migrating up to 12,000 miles annually — and dive the deepest, down to 3,000 feet in search of jellyfish, their favorite food. 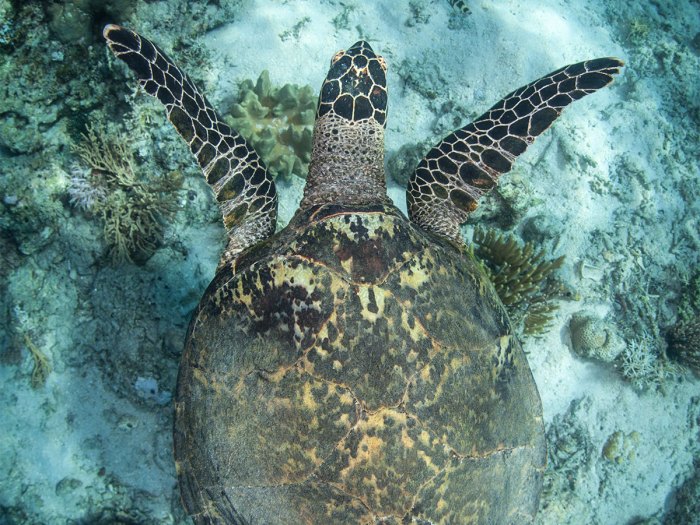 Hawksbills are small tropical turtles that sometimes nest in the U.S. They hang out around coral reefs, where they use their narrow, beak-like jaws to eat sponges, anemones, squid and shrimp. They were hunted almost to extinction for their ornate shells.

Scientists recently discovered that hawksbills biofluoresce (they glow, but they don’t make their own light) — the first reptiles known to do so. 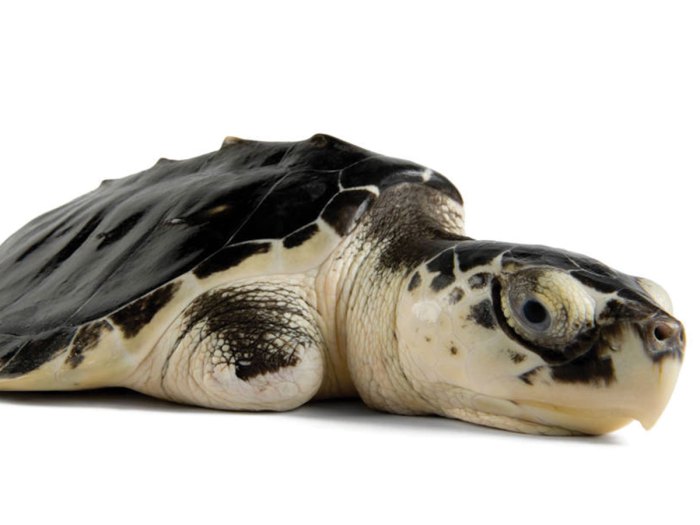 The smallest and most endangered sea turtles are Kemp’s ridleys; they are 2 feet long and weigh 70-110 pounds. Juveniles live along the Atlantic Coast, but as they mature, they move to shallow waters in the Gulf of Mexico. Their mighty jaws enable them to eat clams and crabs.

To help increase their numbers, the National Park Service incubates hatchlings and has public releases at Padre Island, Texas. You can cheer on hatchlings as they scamper toward the water! 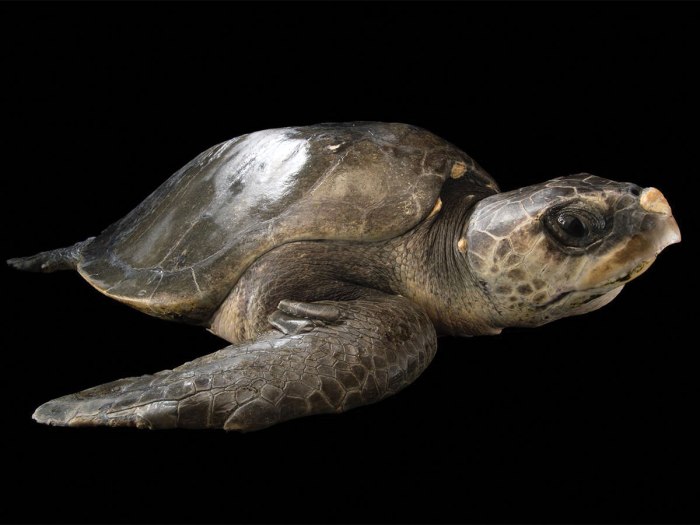 The flatback is mostly in Australia, and the olive ridley is found in warm regions of the Pacific, Indian and Atlantic Oceans. It swims in U.S. waters but does not nest here. 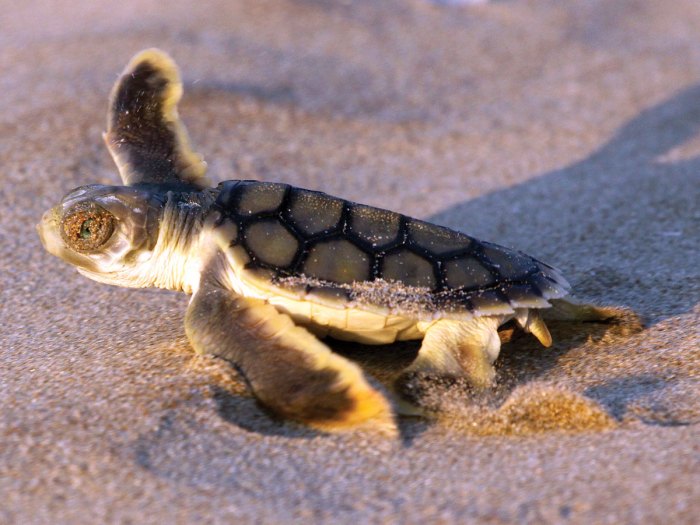 WHERE CAN YOU SEE SEA TURTLES?

Your best chance of seeing sea turtles in the wild is during nesting season from May to October. Sea turtles nest on Gulf Coast beaches from Texas to Florida, on the Atlantic Coast from Florida to Virginia, and also in Hawaii. Although sea turtles don’t nest along the West Coast, you might spot them swimming and feeding offshore if you go out in a boat or kayak.

The easiest and safest way to see wild sea turtles is to join a guided night walk, where you can see a female laying eggs near the dunes. Guides use red lights and take other steps to minimize disturbance to turtles.

HOW CAN YOU HELP THE SEA TURTLES?

All sea turtles are endangered or threatened, but some species are making comebacks. One reason for their decline is pollution. Plastic in the ocean can look like jellyfish or other foods, and turtles might choke on it or get it lodged in their gut. Fishing nets sometimes drown turtles, and bright lights in coastal areas confuse hatchlings and cause them to crawl away from the ocean. Some adults are hunted for skin, shells and meat.

Conservationists are making a difference. Turtle-friendly light fixtures, which don’t confuse hatchlings, are standard in many coastal areas. Improved fishing gear, such as lanterns on commercial nets to help turtles avoid them, and TEDs (turtle excluder devices) built into shrimp nets so they can escape if caught, save many turtles.

A simple way to help is to remove everything when you leave the beach — chairs, all plastic and garbage — to keep a nesting turtle from getting entangled. Even smoothing out sand castles before you leave helps turtles travel the beach safely.

3 Comments on Meet the 7 Species of Sea Turtles