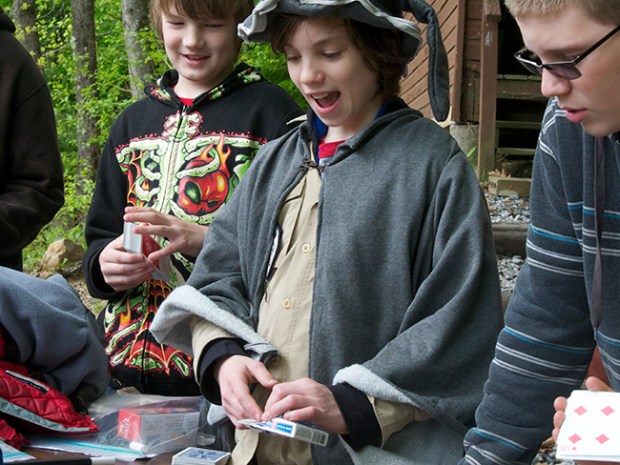 It’s the No. 1 rule of magic: Never reveal the secrets behind your tricks.

Magicians have been following this code for centuries. Until now.

More than 200 Boy Scouts gathered at Camp Workcoeman in New Hartford, Connecticut, for The Magic Camporee. They were there to work their way through 10 stations, learning a different magic act at each one.

They learned that magic isn’t accomplished by some kind of supernatural ability. It’s all about distracting your audience so they don’t realize what you’ve just done. And it’s a lot like playing a sport or musical instrument — it takes practice to get it right.

But before the Scouts at The Magic Camporee did anything, they had to make a promise.

“I do hereby promise on my honor as a Scout that I will keep secret the magic tricks that I learn today.”

Thankfully, Boys’ Life is the most trustworthy publication out there. We were able to convince the organizers of the event — most of them professional magicians — to share four of their tricks for the exclusive use of our readers.

So read on to learn how to amaze your family and wow your friends.

And remember: Never tell them how you did it.

1. Give a volunteer a deck of cards and ask him to divide it into four piles, each approximately the same size. Explain how the number three is a magic number. For example, a tripod — with its three legs — is one of the sturdiest pioneering structures a Scout can build.

2. Ask the volunteer to pick up the pile of cards closest to himself and transfer the top three cards from that stack to the bottom. Then have him deal a card from the top of that stack to each of the other three piles.

3. Have the volunteer repeat the process with each of the other piles, emphasizing the magic number of three.

4. Explain how, in spite of the fact that the cards have now been thoroughly shuffled by the volunteer, we are going to turn over the top card on each stack and find that all of them are aces, thanks to the magic power of the number three.

5. Turn over the top card in each stack and … what are the chances? All aces!

Before you begin your trick, make sure the four aces are at the top of the deck. As the volunteer rearranges the cards, make sure he saves the pile with the four aces for last. If he does, then you’ll always end up with the four aces on the top of each pile. You’ve distracted the audience by talking about the power of the number three, and they never realized that moving all the cards around actually set them up exactly how you wanted them.

2. Spell the words of the Boy Scout motto — “Be Prepared” — out loud as you take one card for each letter from the top of the deck and place it on the bottom of the stack. So you’ll say “B” (take the top card and put it on the bottom), “E” (move another card from the top to the bottom), then put the next card face up on the table for the space between “Be” and “Prepared.”

4. Repeat the process with the Scout slogan: “Do a Good Turn Daily.” You’ll say “D” (take the top card and put it on the bottom), “O” (move another card), then place a card on the table face up for the space between “Do” and “a.” Repeat this process until you’ve spelled it all out.

5. At the end, you should have seven cards face up on the table and one left in your hand. Tell the audience that all of those letters have one thing in common: Boy Scouts. Flip over the card in your hand, showing not a regular card as expected but — surprise! — a card with the BSA logo.

With permission from a trusted adult, download an image of the Scout logo, print it out and attach it to the face of any card. Make sure it fits on the front of the card so you can’t see it from the other side. Stack that card face down on top of seven random cards. As you work through the letters of the Scout motto and slogan in front of your audience, the final card should be the one with the Scout logo. You’ve tricked the audience by showing them the bottom three or four cards, making them assume that all the cards are regular playing cards.

1. Ask a volunteer to confirm in front of the audience that you guys have not arranged anything in advance for this trick.

2. Hold up a sealed envelope, and confirm that your volunteer doesn’t know what’s inside. Tell the audience that inside the envelope is your prediction of how the trick will turn out.

3. Lay three coins on the table: one penny, one nickel and one dime. Ask your volunteer to “call out” two coins.

4. Have the volunteer open the envelope. Inside you will have correctly predicted which coin he chose.

Take a piece of paper and write on it: “You will choose the nickel.” Fold it and place it in a sealed envelope. The trick is no matter which coins your
volunteer selects, you can manipulate the audience into thinking you have made an accurate prediction.

When you ask the volunteer to “call out” two coins, he might …

1. Leave the nickel on the table and choose the other two coins. If so, slide the two coins that he named out of the way, leaving only the nickel. Have him open the envelope. It looks like you predicted the future correctly! He chose the nickel. Or your volunteer might …

1. With the help of an assistant or two, tie two separate pieces of rope around a magic wand using single overhand knots.

2. Tie one Scout neckerchief onto the ropes on each side of the wand, again using overhand knots.

3. Take one rope from each side and tie the same knot around the neckerchiefs. You are left with what looks like a knotted mass of rope and neckerchiefs, with a magic wand stuck in the middle.

4. Tell your audience, “Be amazed as I remove the neckerchiefs without untying them!”

5. Pull out the wand from the mass of knots, and have your assistants pull on the ropes. Somehow they come apart with the neckerchiefs’ knots still in place!

With the right arrangement of knots, you can trick your audience into thinking everything is knotted together when, in fact, it will all slide apart quite easily.

The Magic Camporee at Camp Workcoeman was hosted by the Northwest Hills and Hockanum River districts of the Connecticut Rivers Council. The magicians were volunteers from the local chapter of the Society of American Magicians.

Interested in getting into magic? Check out the Society of Young Magicians.