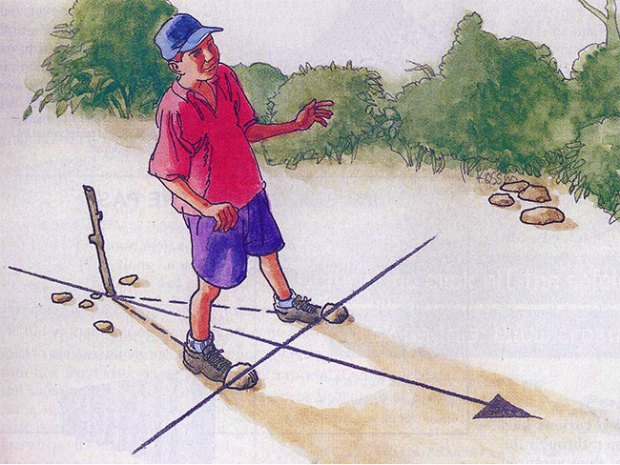 You’re lost in the woods. That’s bad. You forgot your compass. That’s worse. But it’s not hopeless.

There are several techniques you can use to find true north and get yourself reoriented.

If you’ll wait awhile, you can watch the sun and see which way it is moving. If it’s rising, that’s east. If it’s setting, that’s west. You’re oriented.

If you’re lucky enough to have remembered your first-aid kit, get a needle from it. Rub it on the silk liner of your sleeping bag or other material, and the resulting static electricity magnetizes it.

Lay the needle on a blade of grass and float that in a cup of water. It will orient itself in a north-south axis. You’ll have to guess which way is north, but at least you’ll have a 50-50 change of being right.

Find a stick that is about three feet long. Poke it in the ground so that it is standing straight up. Then place a rock at the end of the shadow cast by the stick. Wait about 15 minutes.

Draw an imaginary line from the first rock marker to the second. West is the direction of the first marker.

The Oldest Trick in the Book

But if you have no watch, no needle and the sun has gone down, stay put. Rescuers look near where you were last; if you wander, you’re less likely to be found.