When setting sail from Mackinaw City, Michigan, you go where the wind takes you.

It’s up to the weather.

To the west, there’s St. Helena Island Nature Preserve, more than 200 acres of pristine forest with a lighthouse that’s open for tours. There’s also Beaver Island — the largest island in Lake Michigan, with two airports and its own ZIP code.

And there’s the town of Charlevoix with its modern marina and historic buildings and trails.

To the east, there’s Mackinac Island, the popular tourist destination where Scouts serve every summer as the state park’s honor guard, raising and lowering 26 flags every day and performing multiple service projects.

There’s Hessel, a quaint little town on the upper peninsula with spectacular lakefront views. And there’s Cheboygan, home port of U.S. Coast Guard cutter Mackinaw, an impressive 290-foot vessel designed to break the ice when the Great Lakes freeze over.

One day late last summer, the Scouts of Troop 889 in Livonia, Mich., sat down with the captain and first mate of the Retriever, the 52-foot sailboat that was ready to leave Mackinaw City and become their home for the next several days. 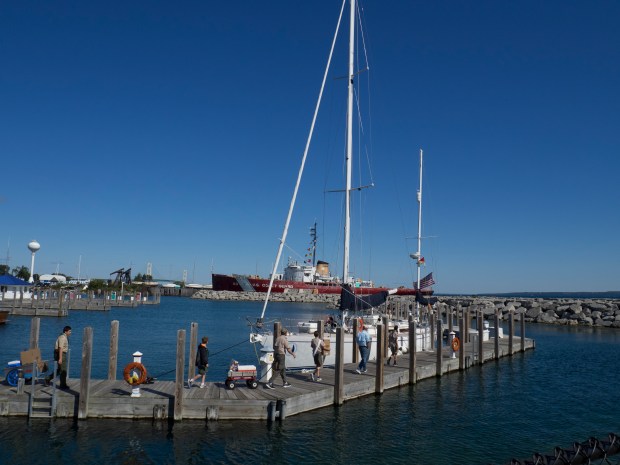 After analyzing the weather and studying the charts, the Scouts began planning their route. To the east and into Lake Huron they would go, following the wind and the waves.

Their adventure was just beginning.

The Michigan Crossroads Council’s Great Lakes Sailing Adventure program takes Scouts who have never sailed — like those from Troop 889 — and puts them on the water for up to six days.

On Day One, they might not know the difference between bow and stern or leeward and windward. By the end of the day, they know all about tacking, jibing, sail trim and helmsmanship. 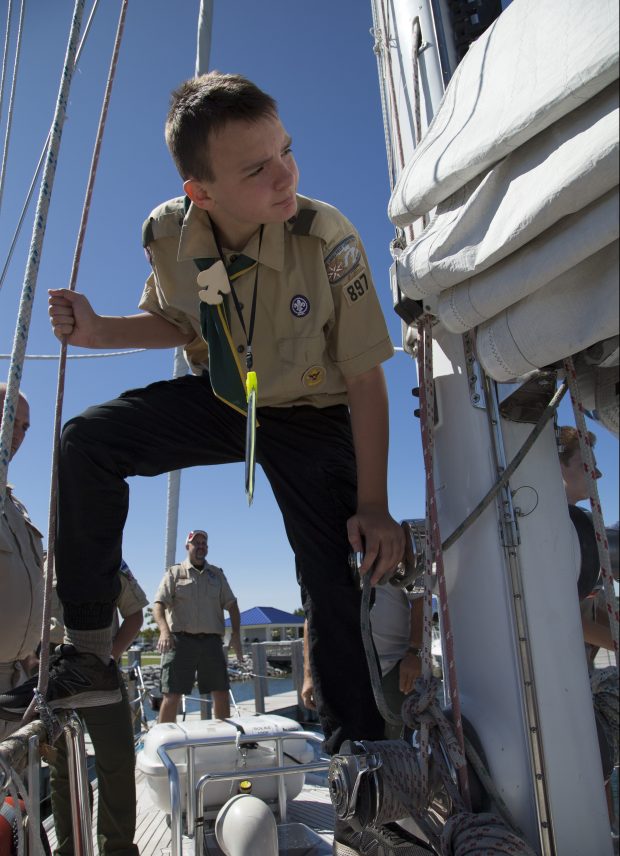 It requires patience, concentration and teamwork.

“Just seeing how a sailboat really works … ” says Michael Delphia, 14. “It’s just amazing to see how it all functions together with the troop working together. It’s crazy.”

Some Scouts were positioned aft — in the back of the ship — while others were in the front — known as the bow.

They mainly sailed a broad reach — the direction the wind is currently blowing — but learned it is possible to sail a close-hauled course — against the wind.

They learned to trim the sails in relation to the wind direction — and they got to actually steer the vessel using a wheel that turns the rudder, steering the ship in the proper direction.

And they used their knot-tying skills to keep everything secure. 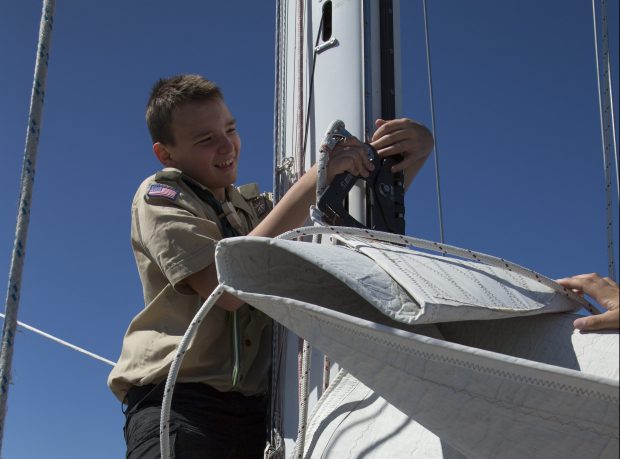 The Retriever is designed to accommodate 10 youth and two Scout leaders. Combined with the captain and first mate, there is a crew of 14 on board, each with a job to do.

The group is divided into two crews. The above-deck crew handles the sails, tends the lines, serves as lookout and watch, and keeps the topside clean. The below-deck crew cleans below deck, prepares and serves meals, and performs navigation duties.

The Scouts rotate among crews so that, by the end of their trip, everyone has been trained for pretty much every job on board. 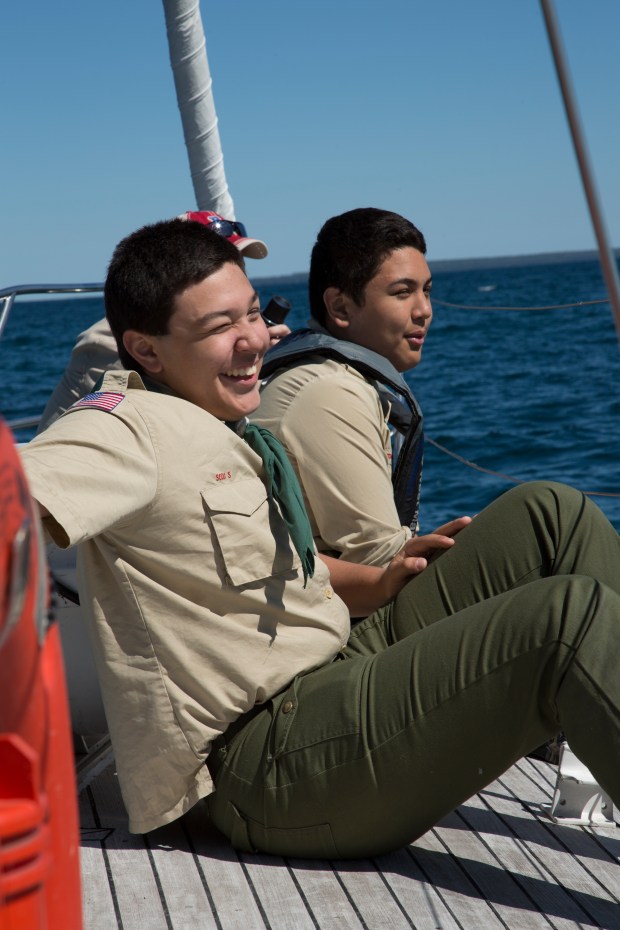 “My favorite thing about the trip has been steering the ship,” says Caleb Parmenter, 14, “because you kind of get to order people around a bit sometimes.”

On Mackinac Island, the Scouts sample Mackinac Island Fudge, an island tradition since 1887. At Hessel, they explore the islands and learn the population there drops to 50 during winter.

At Cheboygan, they dock at a picturesque port surrounded by other vessels on the same mission: exploring by water all the Great Lakes has to offer.

“I had never really been on a boat,” Michael says. “It’s amazing to just explore.

“Just sitting towards the bow and just feeling the wind and looking at the waves passing by — it gave me a lot of peace of mind.”

The School Ship Retriever is a 52-foot ketch, having a main mast of 80 feet tall and also a mizzen mast.

Translation: It’s a very safe and stable vessel, perfect for teaching Scouts how to sail. Most of the vessels on the Great Lakes are designated as passenger vessels, not school ships. The difference is that there are no passengers on a school ship. Instead, there is one captain and one first mate, and the rest are members of the crew. Before the Scouts acquired it, the Retriever competed in one of the most popular Great Lakes Races, the Chicago Yacht Club Race to Mackinac, winning in 2003 and 2005.

What: The Great Lakes Sailing Adventure, brought to you by the Michigan Crossroads Council

When: Expeditions run from June through August, with weekend expeditions on Memorial Day and Labor Day. Head to http://www.michiganscouting.org/outdooradventures/great-lakes-sailing-adventure/ for more information.

Safety tip:  For vessels more than 20 feet in length, life jackets need not be worn when the qualified supervisor determines it is prudent to abide by less-restrictive life jacket rules.