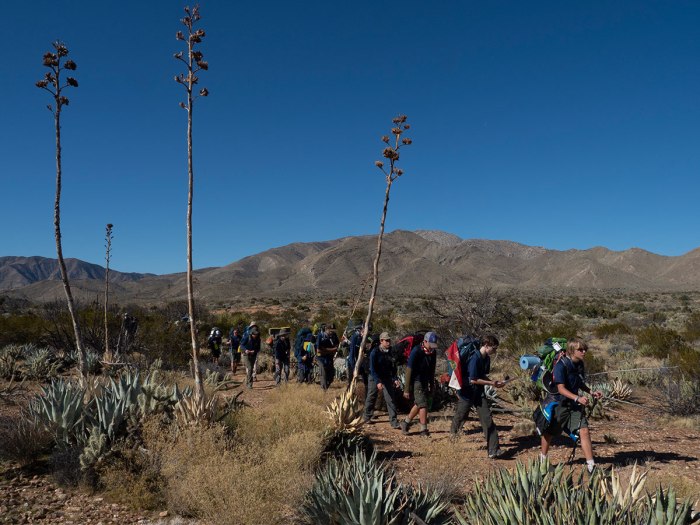 In 1846, more than 500 soldiers of The Church of Jesus Christ of Latter-day Saints began a 1,900-mile march from Iowa to California to help West Coast troops during the Mexican-American War. Along the way, they cooked cakes on glowing coals, tussled with “jumping” cholla cactuses and trekked across rugged deserts.

The regiment’s journey has been called “the greatest march of infantry in the history of the U.S. Army.” The trail they forged crosses more than half the country.

Today, you can hike some of that same trail and have some of those same experiences. As a bonus, you can earn the San Diego-Imperial Council’s U.S. Mormon Battalion Trail High Adventure Award. That’s what Troop 500, chartered to St. Agnes Catholic Church of Point Loma, California, did in January.

“It was amazing to walk in the footsteps and hike the same trail as those soldiers,” says Jackson Kirby, 12.

A lot of the original trail has been paved over or is on private land. The Scouts chose to hike a 14-mile stretch in California’s Anza Borrego Desert State Park.

To confirm the route was passable, the troop’s adult leaders did an exploratory hike and found a wonderland bristling with sagebrush and foxtail cactus amid the Laguna Mountains. 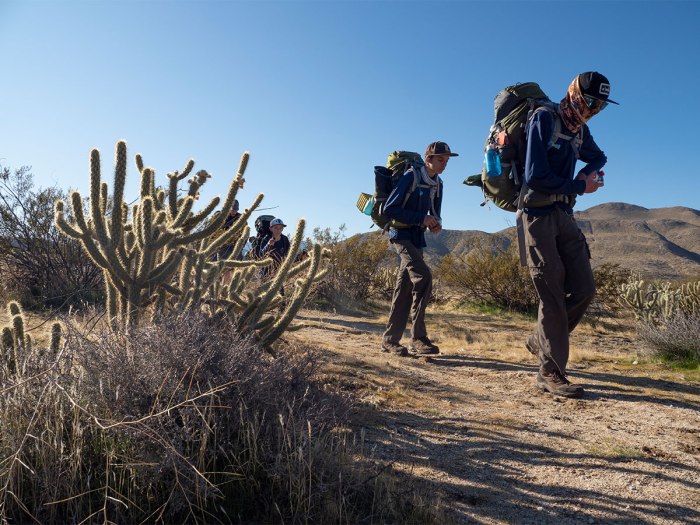 The trip wasn’t all fun. One of the troop’s adult leaders, Laurie Unthank, got stuck with a cholla cactus during the exploratory hike.

“It attacked me and embedded its barbs in the side of my calf,” she says. “I couldn’t bear the pain of pulling it out myself, so our Scoutmaster took two flat rocks and took it out for me. It hurt like crazy!”

Cholla cactus doesn’t literally jump, but it can seem like that as needle-covered stems can easily detach from the plant even if you slightly brush up against it.

In response, the troop packed tweezers. A good choice, since Tobin Skinner, 13, got stuck with chollas, too.

“It took forever to get the spines out,” he says. 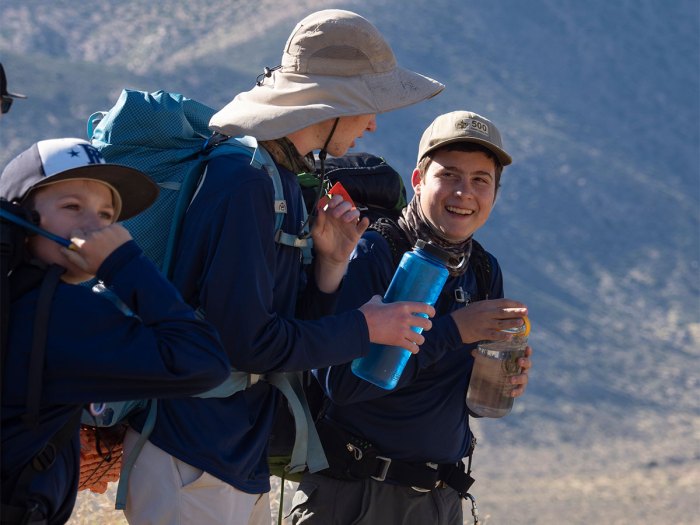 A TRIP BACK IN TIME

Axel Mitchell, 15, says he enjoyed learning about the trail’s history during the troop’s three-day trip.

For six months, members of the Mormon Battalion endured sickness, starvation and the elements as they trekked over mountains and deserts.

“It must have been much harder to do it back then,” says Killian Treppa, 12.

Scouts could still see where the soldiers had built the road for their wagons and widened a dry waterfall by hammering it out with pickaxes. The battalion never had to fight, except for fending off a herd of wild cattle, later referred to as the “Battle of the Bulls.” When they arrived in California, soldiers helped build roads and a fort. 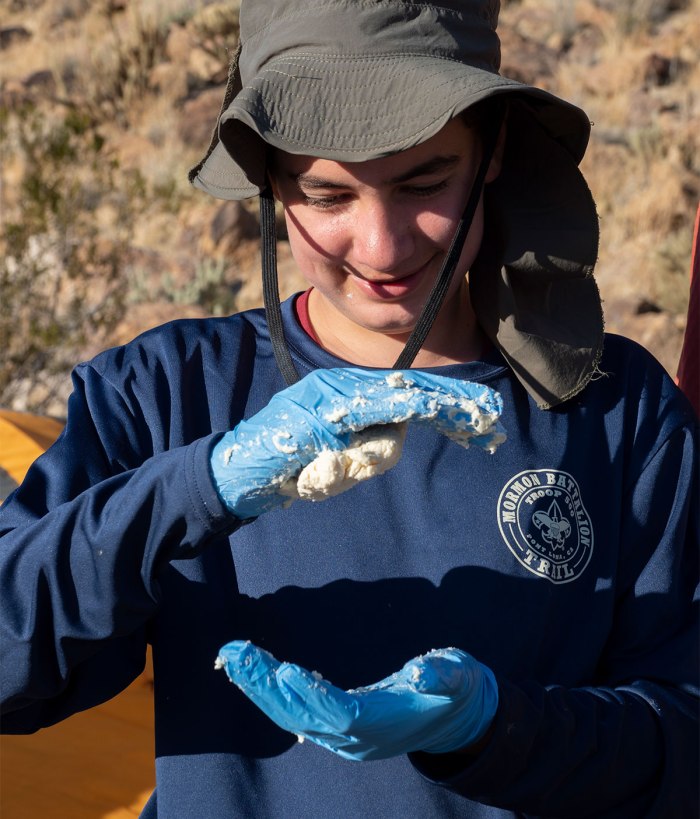 Antonio Maldonado III, 15, helped his troop re-create a meal the battalion would have eaten on the trail: greens, dried meat and “ash cakes.”

“They had few ingredients and even less flavor,” Antonio says of the cakes. “Fortunately, we added honey, and that made all the difference.”

Ash cakes are patties of flour and water cooked directly on glowing coals. They pick up a little ash, but they go down OK after a long day of hiking.

“The bare-boned meal taught us that after a long day of hiking and trail-building, all the Mormon Battalion had was scant food,” Antonio says. 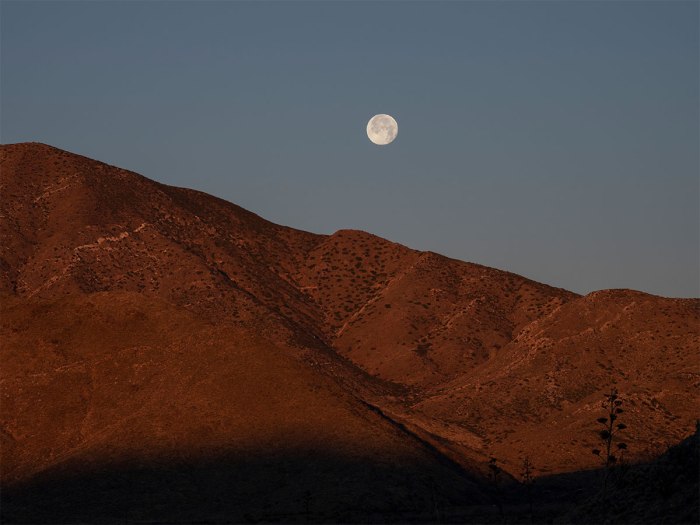 Scouts learned lessons not only from history, but also while in the park.

“My tent mate left our rain fly behind to save weight. It turned out to be a bad idea, but we warmed up fast when the sun came out,” says Hayden Howard, 15. “I froze on the second night.”

Before you hit the trail, confirm the gear you’re bringing, especially shared gear, he says. Still, the guys stayed in high spirits.

“You’d think we’d go right to sleep after a long day of hiking,” says Ben Folk, 14. “Nope! Instead, we stayed up late watching the stars and taking in the view.”

While the days were mild and pleasant, the temperatures plummeted at night.

After packing up and driving three hours home, ice flew out of his gear when he unpacked. 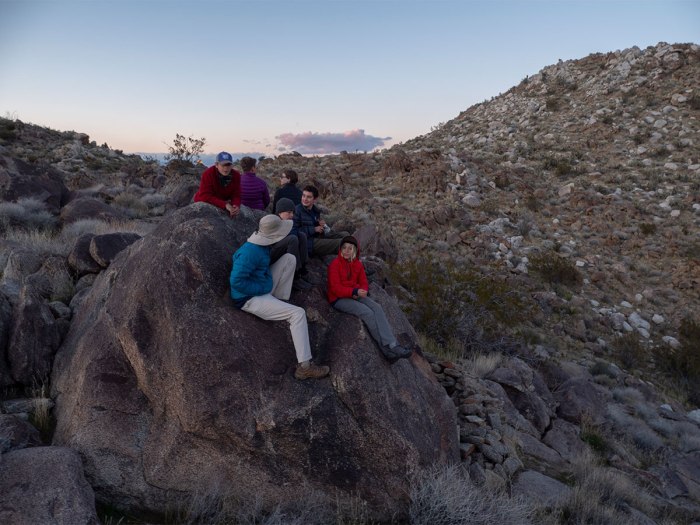 The hike and meal were requirements for earning the council award. The Scouts also toured memorials and museums. They even marched in a parade to commemorate the battalion’s arrival in San Diego.

“This was one of our troop’s best backpacking trips,” says Jake Unthank, 12.

Although Scouts were sore by the end of the trip, they were happy they completed it.

“This was my first backpacking trip,” says Garridan Gonzalez, 13. “I am definitely going to do another one.”

MAKE YOUR OWN ASH CAKES 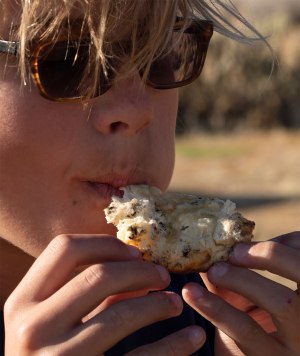 Start a fire and let it burn down to white, ashy coals. In a bowl, mix the water, flour and sugar with your hands. If it gets too sticky, add more flour.

Separate the dough, roll into balls and shape into patties about a quarter-inch thick. Lay them directly on the coals, turning them after 3-4 minutes. When both sides are done, remove them and brush off as much ash as possible.

Add honey or more sugar to make a sweeter ash cake. Bake some extras for snacks for the next day’s march. 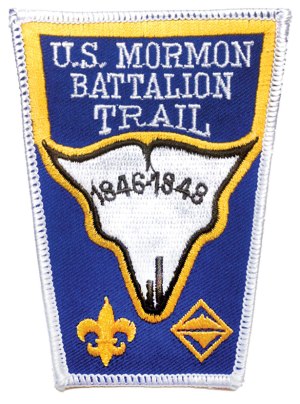 The Church of Jesus Christ of Latter-day Saints is a Christian denomination that started in 1830.

In 1846, church elders asked the U.S. government for help moving west after mobs attacked a city of Latter-day Saints in Illinois. President James K. Polk agreed to help if a group would join to fight in a war with Mexico as the U.S. looked to expand its territory.

The Latter-day Saints enlisted at the urging of the church’s president, Brigham Young; more than 30 women and 40 children accompanied the battalion. To this day, the battalion has been the only religion-based unit in U.S. military history.

The battalion met with Native American tribes along the way and stood guard while one tribe buried its dead during the war. 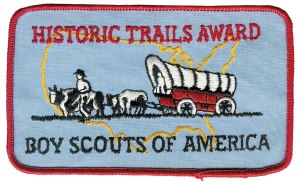 High-adventure and program teams at many councils across the country create special activities, treks and awards. San Diego-Imperial Council’s award program for the Mormon Battalion Trail includes options for Cub Scouts, too.

Check with your local council to see what special awards it offers. Any Scout can earn the BSA’s Historic Trails Award. Requirements include researching and hiking a historic trail, and completing a service project.