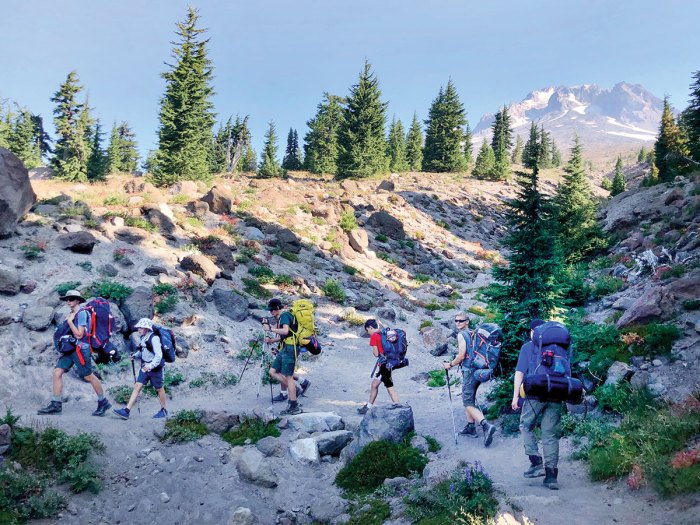 When a Scout couldn’t backpack any farther along the mountainous Timberline Trail, the rest of the crew stopped to figure out what to do.

“We sat down on the trail,” says Owen MacHaffie, a 15-year-old Eagle Scout. “We all took our gear off, and we thought how to get them out safely and how we follow all the rules for Scouts.”

They texted the Scout’s parents to come pick him up. Owen, along with others, helped escort the tired Scout off the mountain. The next day back on the trail, Owen had to make the same difficult decision about whether to continue or not.

Sometimes it’s gratifying to dig deep, keep going and finish the trek, but if you’re too exhausted, it’s more important to not hurt yourself and to try again another time. 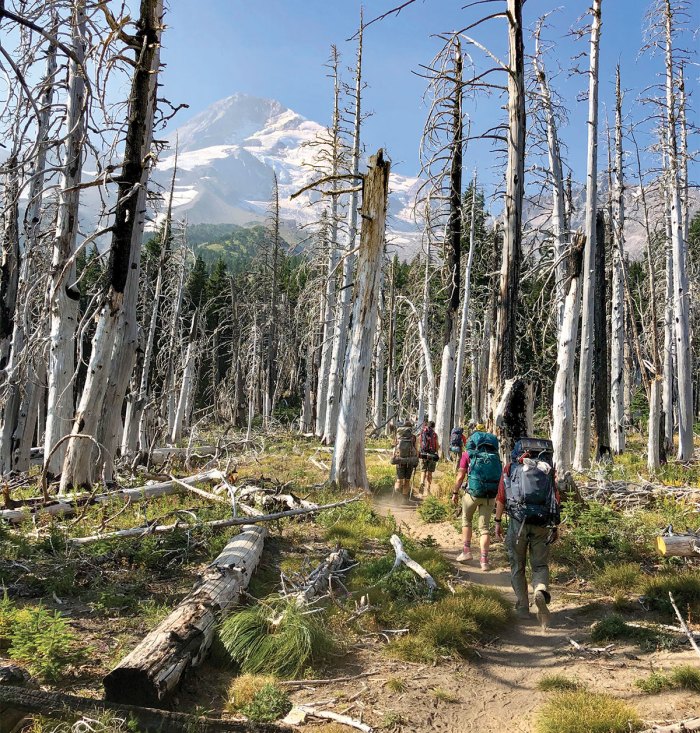 For months, Troop 799 of Tigard, Oregon, stayed home because of the COVID-19 pandemic. When restrictions eased over the summer, Scouts jumped at the opportunity to explore. The troop chose the 41-mile trail encircling Mount Hood — at 11,240 feet, it’s Oregon’s tallest peak. The Timberline Trail provides a scenic trek with views of waterfalls, forests and, of course, the mountain. It’s a grueling challenge, though, as the loop trail climbs and descends from 3,300 feet in elevation to 7,350 feet. 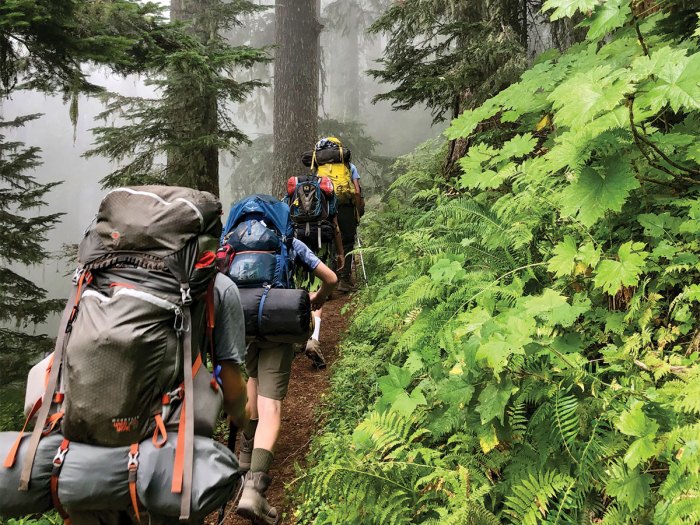 Like any trek, you must be physically ready. One way to prepare for a big trip is to go on a practice hike or two. Practice hikes are shorter outings during which you can get used to traveling with heavy packs, climbing steep hills and strengthening your body. However, due to the coronavirus, the troop didn’t do one.

“We were restless; we wanted to do a big backpacking trek,” 12-year-old First Class Scout Jonathan Ayers says.

That’s understandable since the pandemic had cancelled so many campouts. Still, the Scouts would soon realize how vital it is to practice. 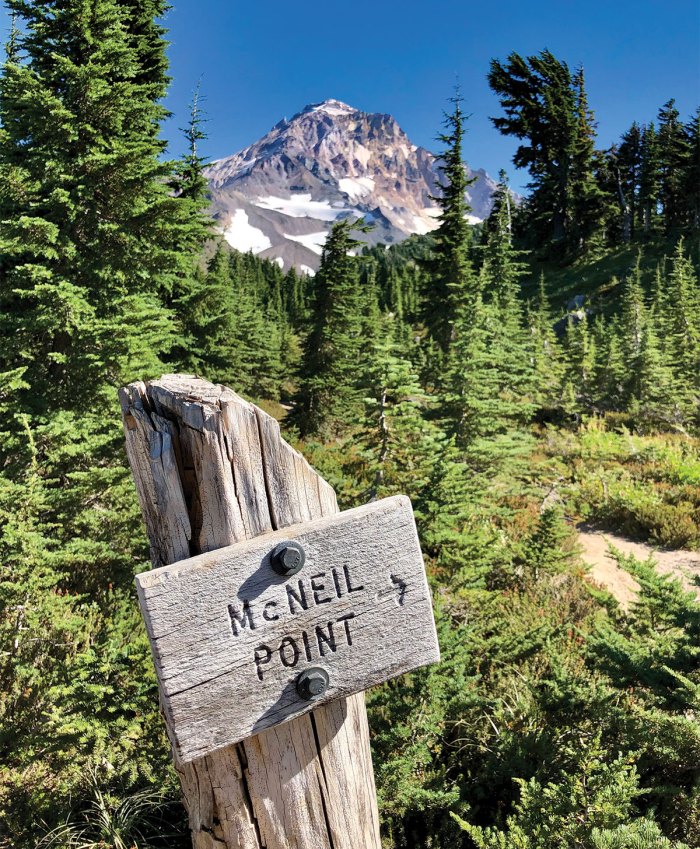 The troop met at the Timberline Lodge at 5,900 feet to start a four-day journey with more than 10,000 feet in elevation gain along the way. The first day, though, was all downhill.

“It was very deceiving,” says Nick Leinberger, a 17-year-old Eagle Scout. “We’re all singing along; it was a very peaceful start before the craziness of the elevation gain.”

The Scouts hoped to travel about 10 miles each day. That meant a full day of backpacking, even on the first day.

“We were a little sore and tired, but we were ready for the next day,” Jonathan says. 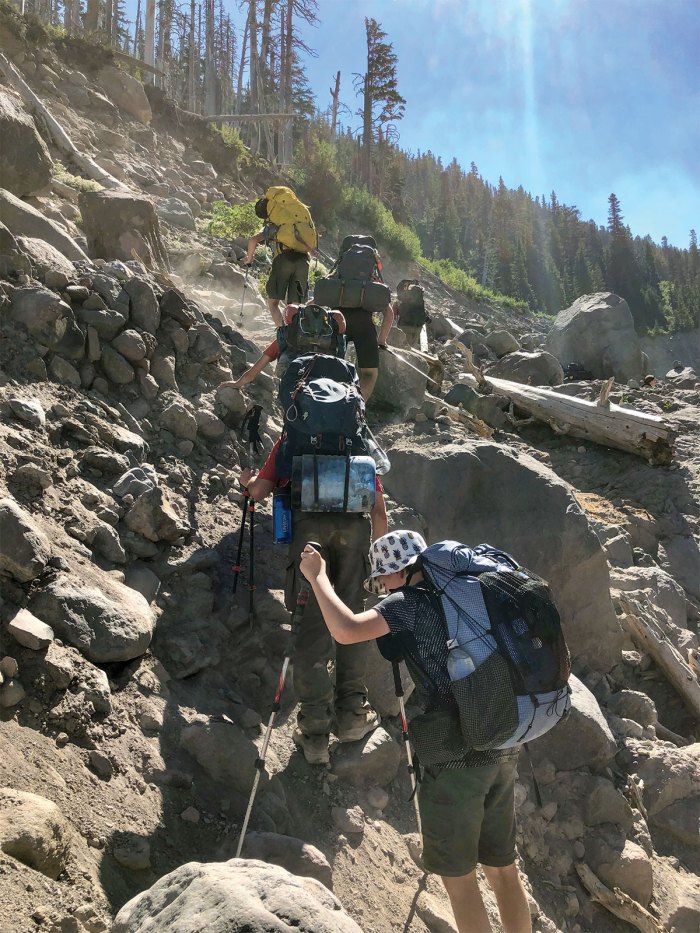 After the Scouts passed the 120-foot cascading Ramona Falls, the trail started uphill. Soon, one of the Scouts became bushed. The crew split up so the weary Scout could be safely escorted back to his parents while everyone else marched ahead to set up camp. However, that meant the escorting group needed to hike 21 miles total to reach camp. They didn’t get there until after sundown.

The next morning, Owen contemplated continuing. Finishing this trek would fulfill the requirements for the Backpacking merit badge. But would it be worth it?

Not if it seriously threatens your health and safety. Owen chose to text his parents to come pick him up. Using the buddy system, Owen was also escorted to the base of the mountain.

“I’m really glad the people that were hurting left,” Jonathan says. “It was the most elevation gain we had to hike so far.” 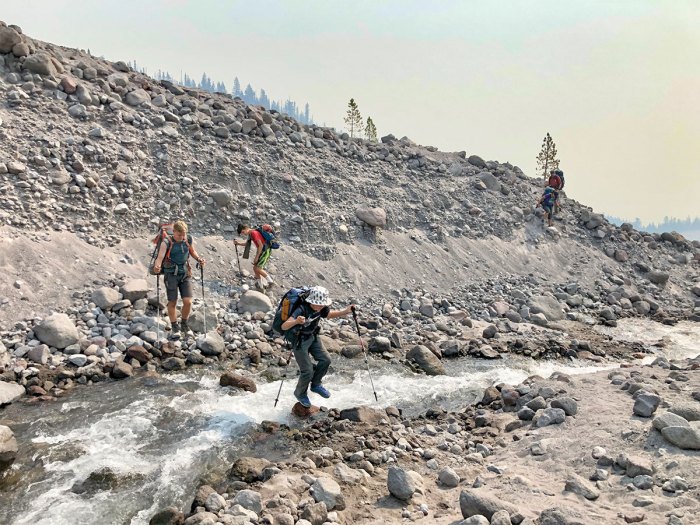 GOING AROUND THE MOUNTAIN

While some Scouts went home to recover, the rest pushed forward. Out of the forest, the crew crossed muddy, frothy creeks, found snow patches and looked out for miles from rocky trails closer to the summit.

Morale soared as the Scouts enjoyed the natural beauty around them. Without shade, it turned into a hot hike under the sun, but at night, the temperature dropped into the 40s.

“We all ate dinner, sitting on a log, laughing,” Jonathan says. “We were having such a good time at camp. That was one of the better nights.” 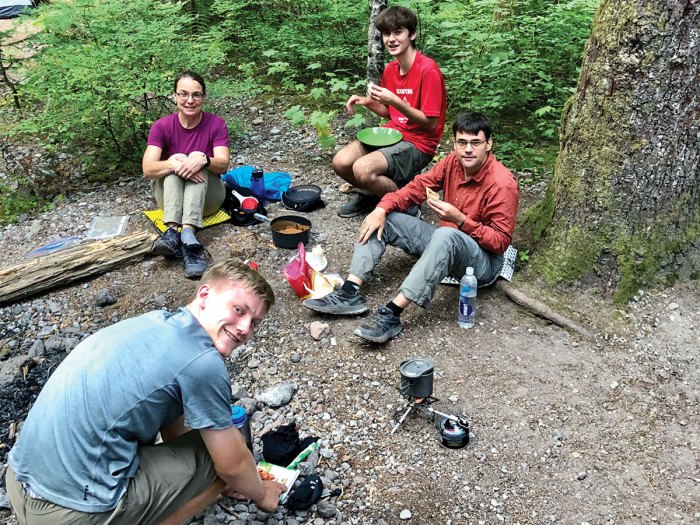 On the final day, the trail dropped back into the forest, where the group spotted white smoke over a wooded ridge.

“We saw the plume of smoke,” Nick says. “We watched the helicopter circle over it.”

As the helicopter dumped water to douse the blaze, Nick received a text message from his father: a strong windstorm was headed their way. The windstorm, gusting at speeds of more than 60 mph, could spread that fire in a heartbeat. This time, everyone needed to go home — now. 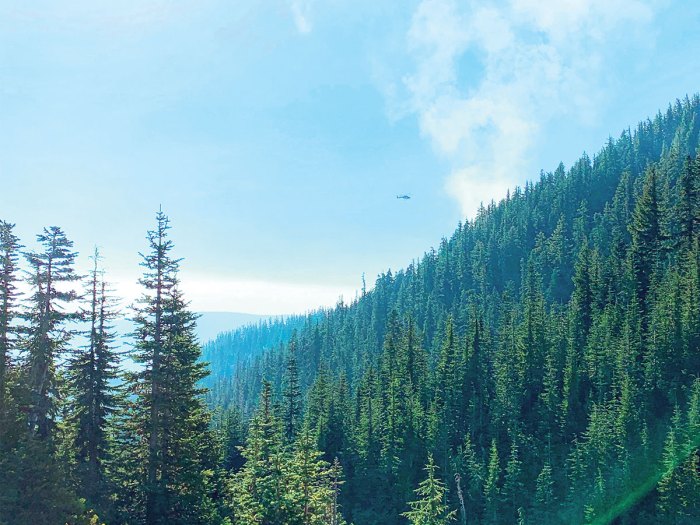 The Scouts scurried down the trail. The air grew hazy with smoke. Just after they reached their destination, forest rangers closed the area.

They avoided the dangerous windstorm, which knocked down thousands of trees, blocking the path along Timberline Trail. The exhilarating end capped off a trip full of blessings counted and lessons learned for future treks.

“I will be doing lots of practice hikes,” Owen says. “I’m definitely doing it again.”

If you come across a wildfire in the wilderness like Troop 799 did, watch the smoke — it can tell you a lot. White smoke usually means light brush and grass is burning, while dark smoke typically means heavy brush and trees are ablaze. Wildfires can spread twice as fast in dry, grassy areas versus in dense forests.

Wildfires are unpredictable, but you can get a good idea of their path by the direction the wind blows the smoke high in the air. You’ll want to stay upwind of the fire and move perpendicular to the wind.