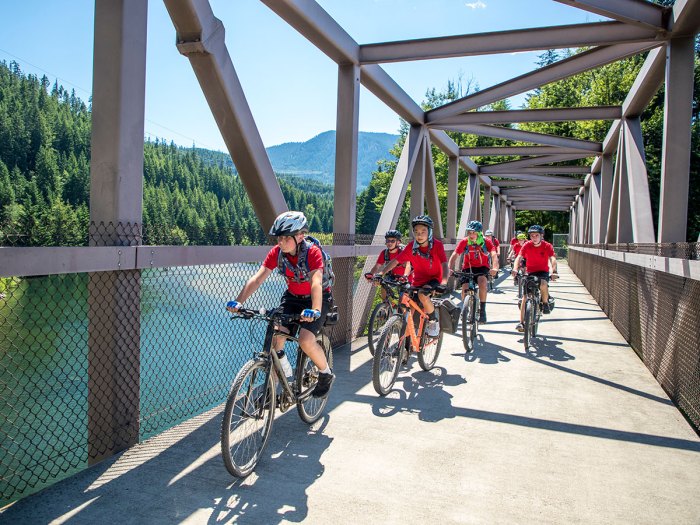 Normally, seeing a paved path wouldn’t feel that exciting. But after you’ve been pedaling miles through a sandy trail in the desert under the scorching sun, nothing looks more welcoming.

“It felt so nice to be back on pavement,” says First Class Scout Jerry Yao, 14. “Sometimes the sand was really thick and very hard to ride through. And sometimes there were huge rocks everywhere — along with sand — and that was very hard to get around.” 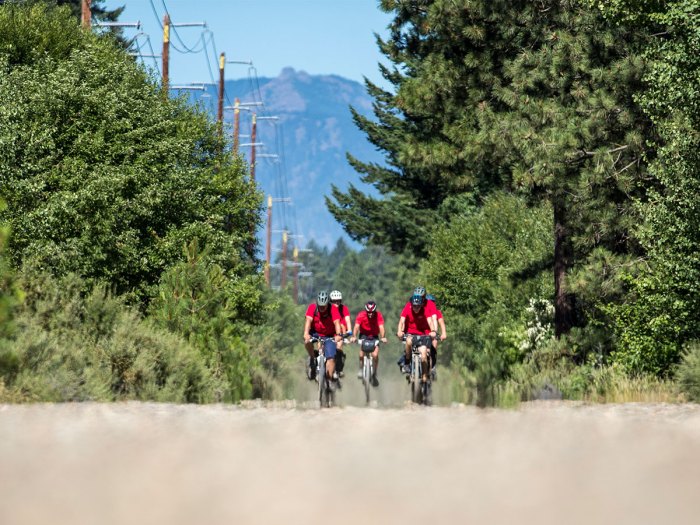 Troop 305 of Walla Walla, Washington, tackled more than 300 miles of pavement, gravel and sand this past summer during a 10-day bicycling trip across Washington and Idaho. Some Scouts had made this journey before, but this time it proved much harder as temperatures soared to 117 degrees.

When the elements turn the trip into a struggle, you start to appreciate the little things, like riding on smooth pavement. The Scouts found many little surprises that transformed this trip into one of their all-time favorites. 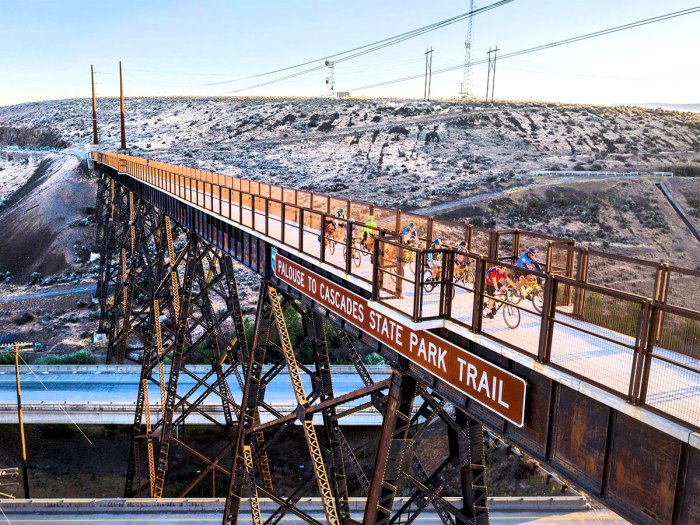 Every three years, Troop 305 cycles from North Bend, Wash., on the western side of the state to Taft, Montana, just beyond the Idaho state line. It’s a long trip, winding across arid flatlands and up wooded mountain passes. The Scouts usually log close to 450 miles.

To prepare for such a trek, the troop organized weekly practice rides for four months. Scouts racked up more than 400 training miles, including scaling steep hills and pedaling consecutive 45-mile days.

Starting out on a gravel trail in North Bend, the crew felt enthusiastic yet nervous. 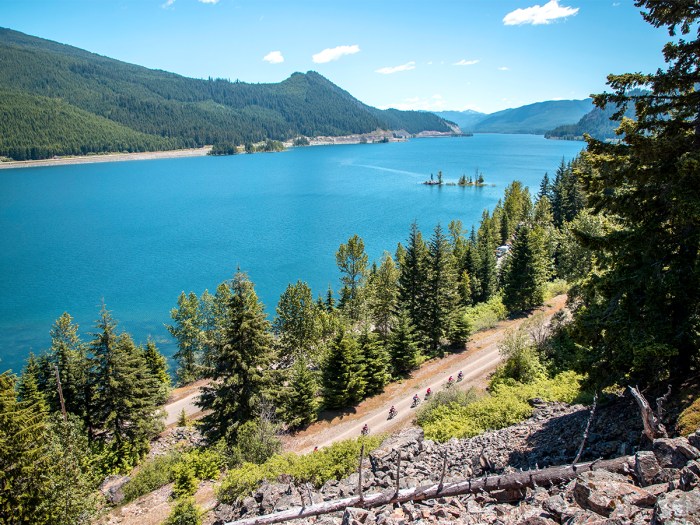 “We all felt prepared, but we knew we’d be riding through a record heat wave for Washington,” says Life Scout Joshua Courtney, 17. “It got the hottest it’s ever been.”

All riders carried about a gallon of water along with tools for quick repairs. Some adult leaders drove a support vehicle with a trailer, carrying the rest of their gear and cold water. The first day, though, wasn’t that hot, and much of the trail was shaded, so the Scouts pedaled 50 miles and glided through an old railroad tunnel that had been converted for hikers and cyclists. 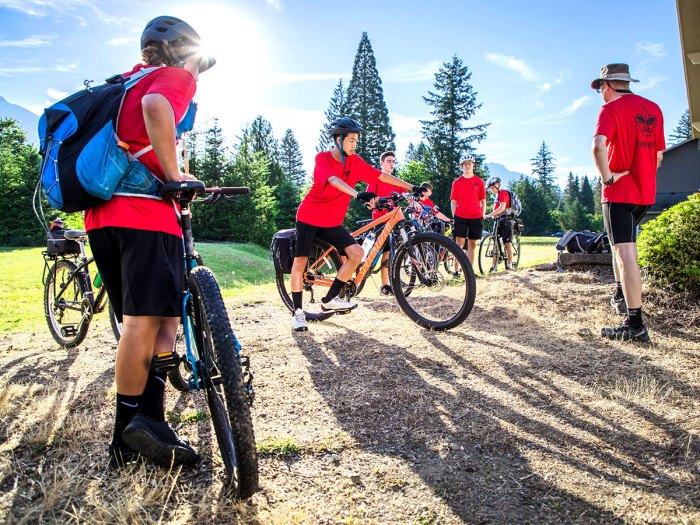 “It was almost 3 miles of just straight blackness with the exception of our headlights,” says Life Scout Bryce Hollopeter, 14.

They ended the ride at a lake, nestled among tree-covered mountains. The next day, the shade disappeared as the Scouts entered a flatter, drier part of the state. 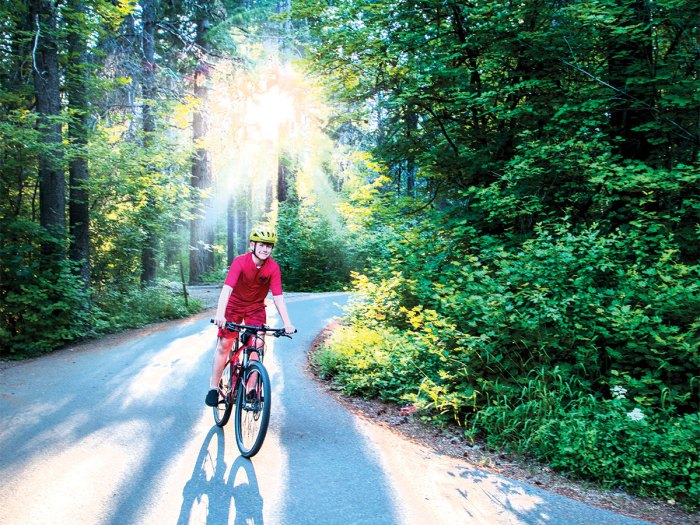 This summer, the Pacific Northwest experienced record heat. The Scouts found a discarded bike tire on the trail, which gave them an idea.

“We had [extra] tires in the trailer, but we didn’t have them with us on our bikes,” Joshua says. “We decided that we were going to carry them on our bikes. On day three, an adult leader’s tire wall blew out. We had the extra tires, so we were able to fix his bike. That was the day we rode 30 miles without our support vehicle — so we were really lucky there, because we were prepared.” 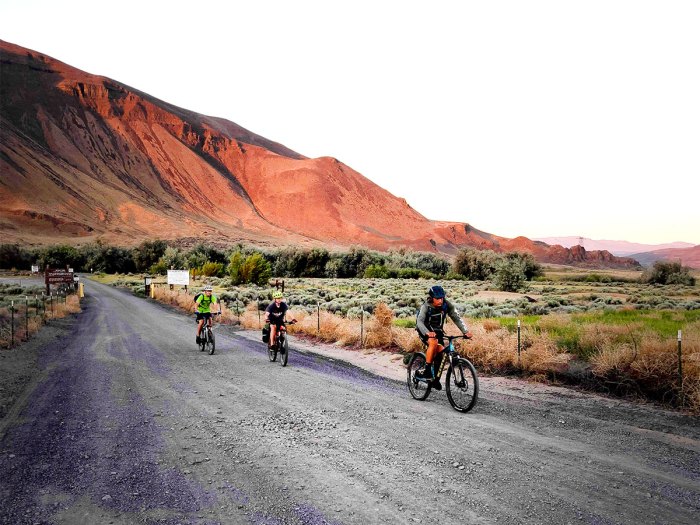 Being prepared helped them get back on the trail instead of sitting stranded under the oppressive sun. Temperatures began rising earlier and earlier each day. Starting on the third day, the riders would stop at noon as it became too hot to continue. 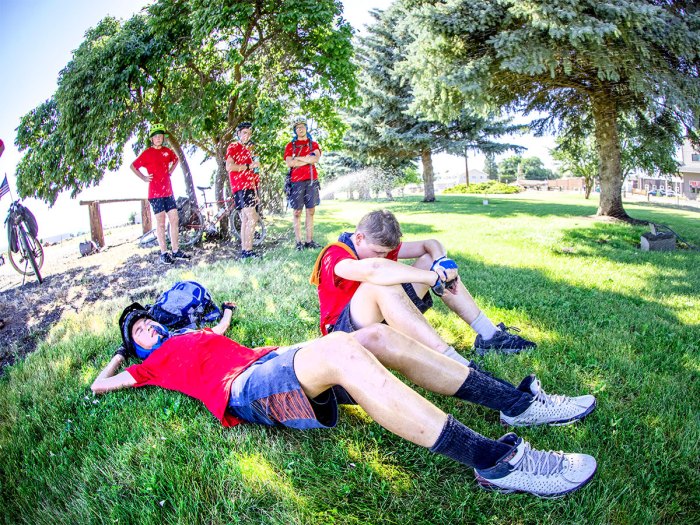 “We got up at 2 or 3 o’clock in the morning so we could leave early to beat the heat,” Jerry says. “It was so cold — we were all wearing sweaters. At the end, we were so hot. We didn’t cool down for a long time.” 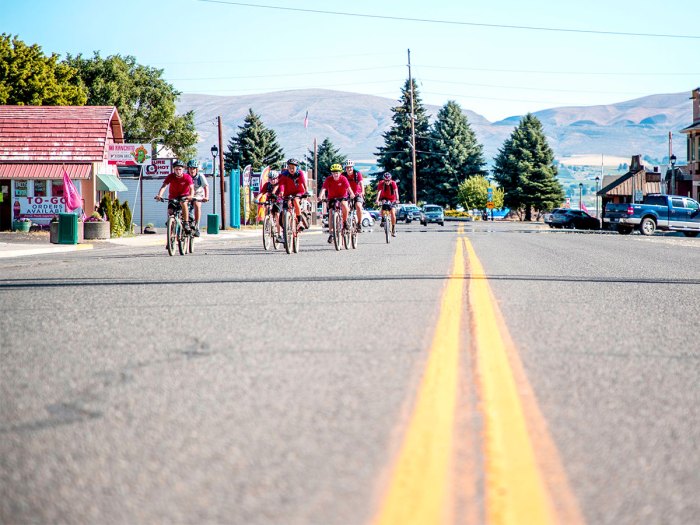 Days got hotter, regularly reaching 110 degrees in the afternoons. That’s when the Scouts really appreciated things like zipping down hills and feeling the wind in their faces or finding a shady tree to nap under at the end of a ride.

The Scouts typically camped in city parks, but on many days the adult leaders called ahead to see if city leaders had other accommodations. As a result, the troop stayed overnight at a church, where the Scouts played pool in an air-conditioned basement. To thank others for their hospitality, the Scouts offered small boxes of sweet onions from their hometown. 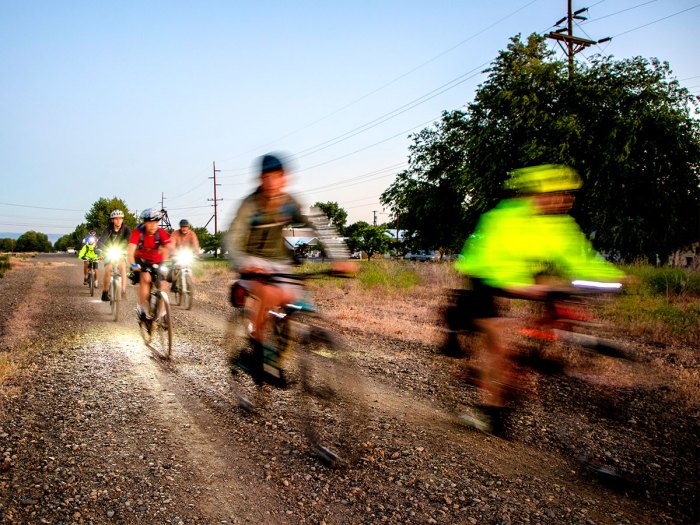 As the trip continued — with some days cut short because of the heat and others totaling nine hours on the road — the troop monitored their progress with GPS apps on their phones.

The adult leaders blogged during the journey, including about the unexpected expenses of buying extra ice and sports drinks to keep everyone cool and hydrated. Another surprise came when blog readers donated to help offset the costs of dozens of drinks and 680 pounds of ice. 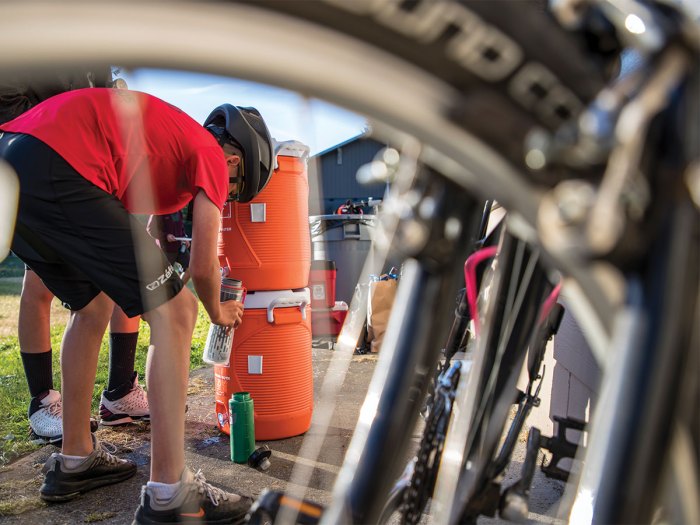 The trip wasn’t just about cycling; the group also learned about the places they rode through. They visited Wallace, Idaho, to see the Great Fire of 1910 monument. This wildfire was one of the most destructive in American history, burning 3 million acres across three states. State and federal agencies responded by taking a more active role in firefighting. The Scouts also toured Kellogg, a city that was once a hotspot for mining silver, gold, lead and zinc. 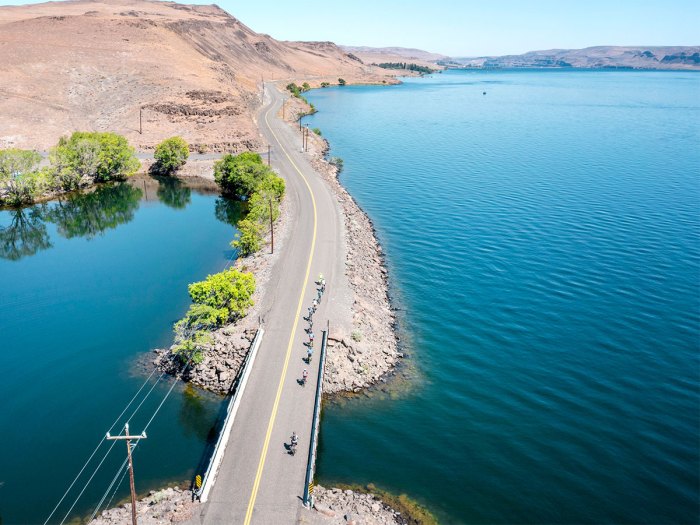 They also did Good Turns along the way, helping another cyclist change a tire, helping someone push a car onto a trailer and pulling a fallen tree from a trail. After crossing the state line, the Scouts were shuttled back to Washington and slept a good part of the way. It had been an adventure.

“This so far is my favorite memory in Scouts,” says First Class Scout Aaron Repoff, 15. “I’ll probably remember this for the rest of my life.” 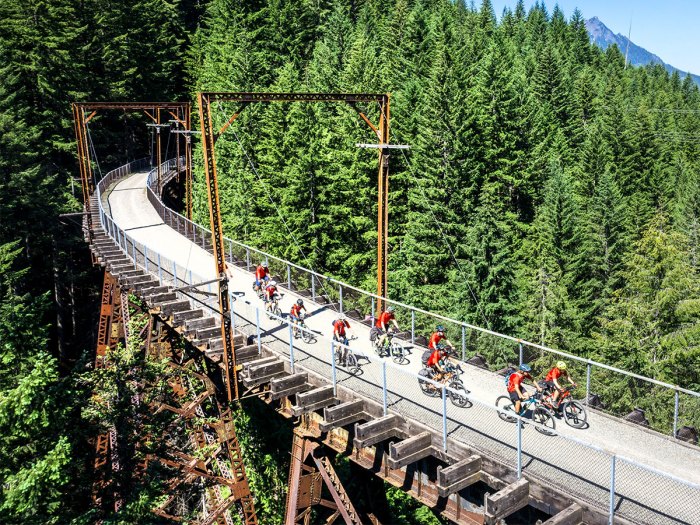 How to Fix a Flat

Rather than trying to patch it up, the troop found replacing the inner tube to be a quick and easy way to fix a flat tire.

“It takes 15 minutes,” 13-year-old Life Scout Bart Gonzalez says. “This way, we knew the tire was fixed, and we wouldn’t get a second flat.”

To replace an inner tube, first flip over the bike and loosen the axle bolt holding the wheel in place. Take the wheel off the bike frame, and unscrew the valve cap. Deflate the tube, slip a tool between the rim and the tire, and slide it around the rim to loosen the tire from the rim. Pull out the inner tube.

Inspect the inside of the tire — a sharp object that caused the flat might still be there. Tuck a new inner tube inside the tire, and then work the tire back onto the rim. Inflate the tube, and install the wheel back on the bike.