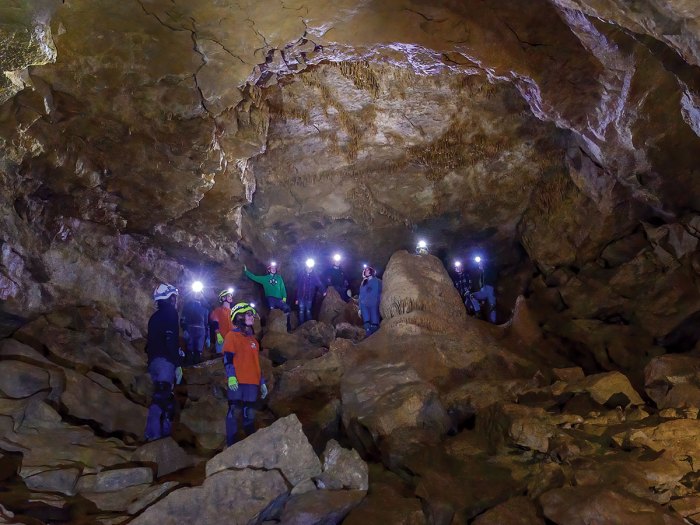 In the middle of the woods, surrounded by moss-covered tree roots, a metal grate sits melded into the earth. It’s not very big — maybe a couple of feet wide. Peer through the door’s bars and you see very little: jagged rocks encircling a passage; beyond that, darkness.

But through the darkness, a fascinating geological wonder exists: Sullivan Cave. The nearly 10-mile cave, located about 25 miles south of Bloomington, Indiana, features long, tight paths, massive rooms and creatures you won’t find on the surface. 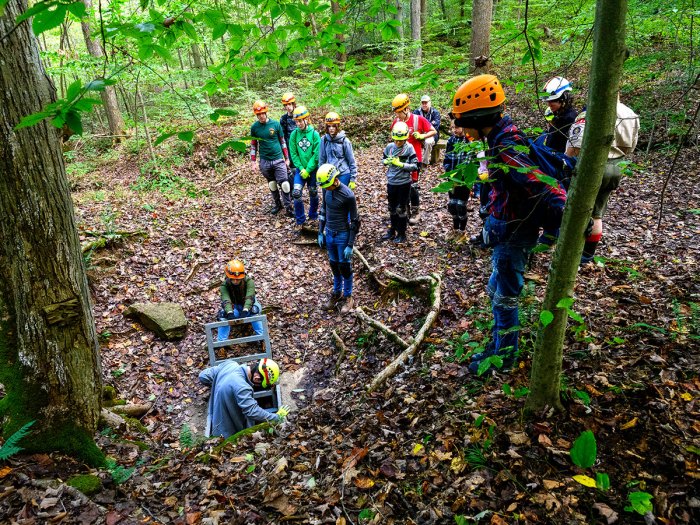 This isn’t a commercial cave. You can’t just crawl through the gate and explore. You need permission, along with an experienced and qualified guide, which Scouts from three Illinois troops got last October so they could venture 100 feet underground.

“The thought of being that deep in the ground is really cool,” says First Class Scout James Hoehn, 15, of boys Troop 797. 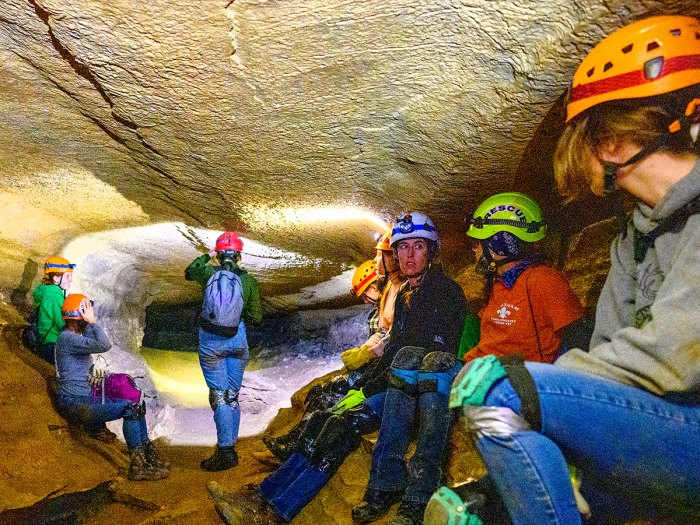 Troop 797 of Utica, Illinois, plans a caving trip every year. The Scoutmaster has been leading caving expeditions for more than 30 years, so he has connections with cave owners and spelunking clubs.

In 2020, the troop wanted to explore Sullivan Cave, owned by the nonprofit Indiana Karst Conservancy. However, the COVID-19 pandemic delayed their trip for a year. 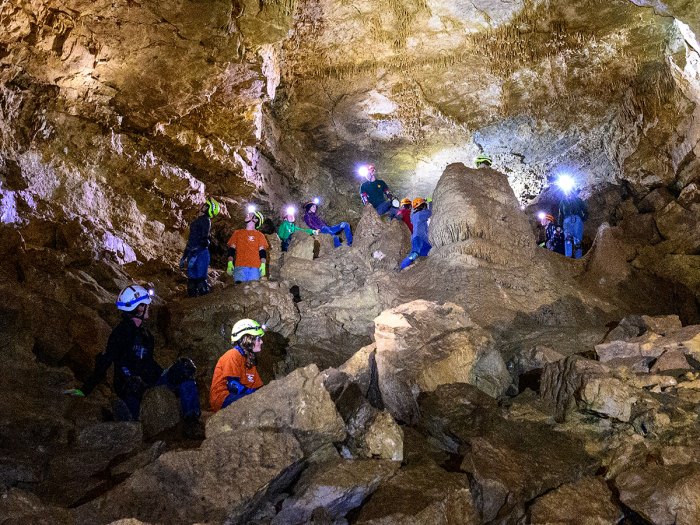 When the Scouts could safely go caving again, the Utica troop invited girls Troop 1091 of Spring Valley and boys Troop 13 of Champaign to join them. To prepare, they went over rules for caving: no running, no jumping, no horseplay. One slip on a wet rock and they could get hurt.

Other safety requirements included following the buddy system and carrying the right gear. Each Scout would have three lights, a helmet, snacks and at least two quarts of water.

“The motto is ‘Be Prepared’,” says Kyle Kremer, 13, a Tenderfoot Scout with Troop 13. “While we were in the cave, the strap came off my headlamp, so now I understand what the motto means.” 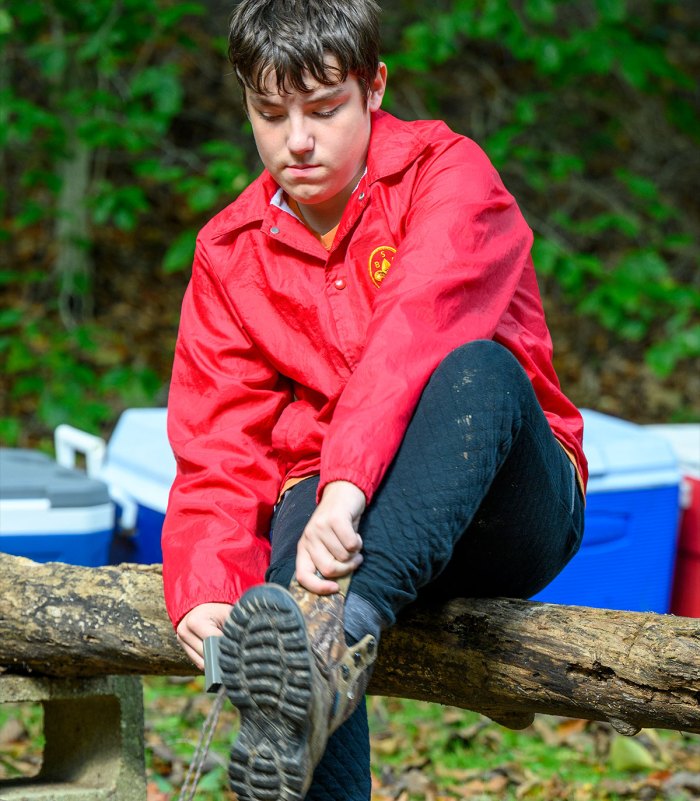 After the Scouts arrived at the 28-acre property, they reviewed the safety rules and dressed for the muddy adventure.

“We put on an old pair of jeans, an old sweatshirt that wasn’t sentimental and duct-taped elbow and knee pads,” says First Class Scout Grace Johnson, 15, of Troop 1091.

The duct tape helped secure the pads, which the Scouts would need for protection as they crawled across rocks.

“The Velcro might not be strong enough,” says First Class Scout John Boyle, 14, of Troop 797. 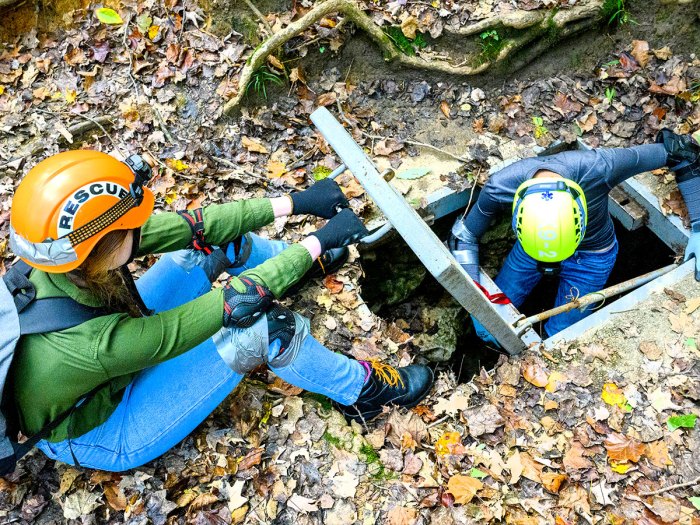 When everyone was ready, the guide opened the metal door. It was time to descend into the darkness.

“I wasn’t really claustrophobic, but there were a few tight spots,” Kyle says. “I felt a little nervous. That’s a natural reaction when you’re trying something new.”

When faced with a new challenge, take your time and breathe. Soon, the situation might not seem so intimidating.

As everyone entered the cave, they started dropping activated glowsticks to mark the path so the group could easily return. They had a long six-hour journey ahead. 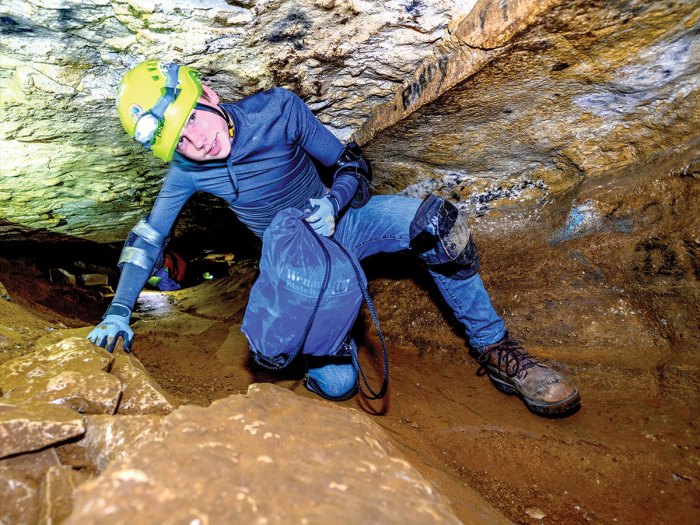 The Scouts encountered different passages in Sullivan Cave. One, called the Backbreaker, forced them to hunch forward as they avoided a 4-foot-tall ceiling. Other rooms, like the Mountain Room, featured tall rock columns and hanging stalactites. The Scouts were careful not to touch or accidentally bump into them.

One area had about a foot of standing water, where they spotted little animals swimming.

“It was cool to see the crawdads; there were some that were see-through,” says Second Class Scout Ella Sartain, 14, of Troop 1091. 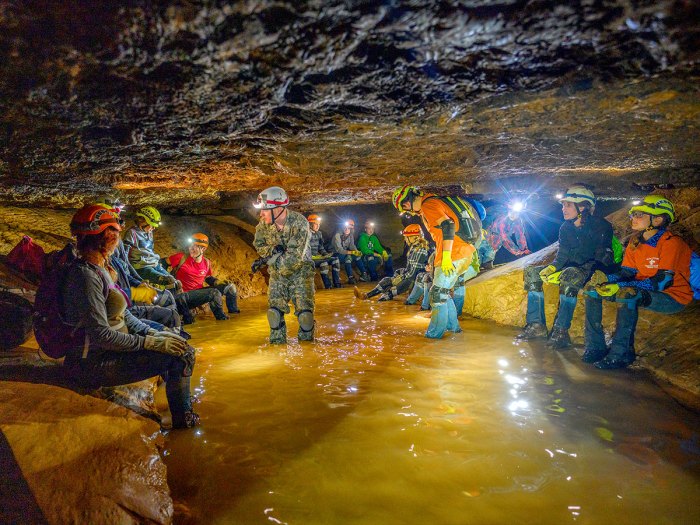 The Scouts didn’t stay in the water for too long, though.

“It was foot-numbingly cold,” Grace says. While they marveled at large, spacious rooms and noticed more wildlife — like a sleeping bat, a little frog and three salamanders — they were also astounded at the litter inside the cave.

Based on some of the brand logos, the trash likely had been there for decades. But it wouldn’t stay. The Scouts pulled out a shopping bag and filled it with trash. Scouts always leave a place better than they found it. 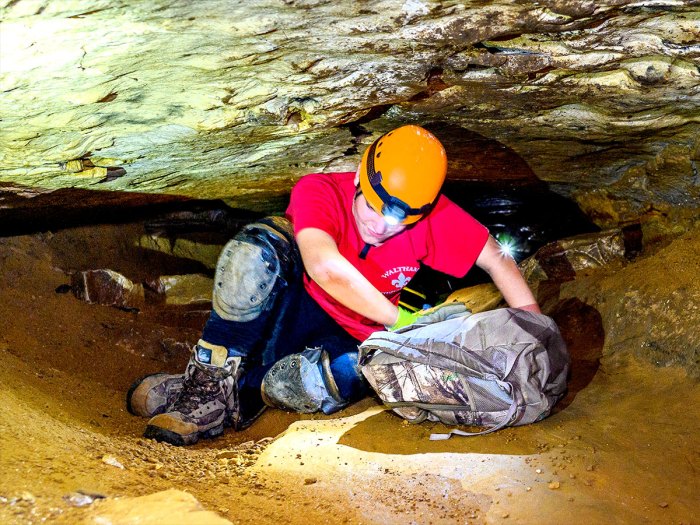 Every 15 minutes, the group stopped to do a buddy check. This also gave them time to take a drink or eat a snack. Even though it was a chilly 55 degrees inside the cave, they were still working hard, so it would be easy to get dehydrated.

By the last part of the trip, the group was muddy and tired. To keep everyone’s spirits up, they started singing — mostly Disney tunes.

“We had an entire musical,” Grace says. 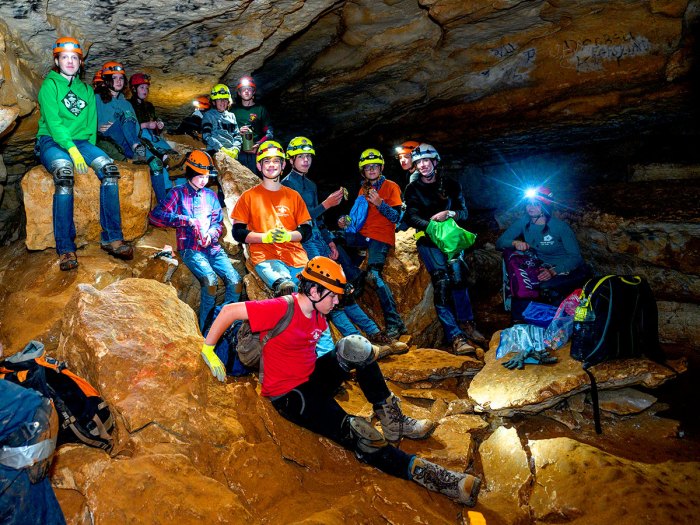 Along the way back, they picked up the glowsticks. When the Scouts emerged from the cave, they were greeted by the delicious aroma of chili. Some adult leaders had been cooking a hearty meal for the group outside the entrance.

Though they were tired, the Scouts felt grateful after their caving expedition.

“It’s exhilarating. Not very many people get to experience this,” Philip says.

Before your caving expedition, review the BSA guide Cave Safely, Cave Softly at go.scoutlife.org/caves. You must have qualified supervision, proper equipment and training before the trip.