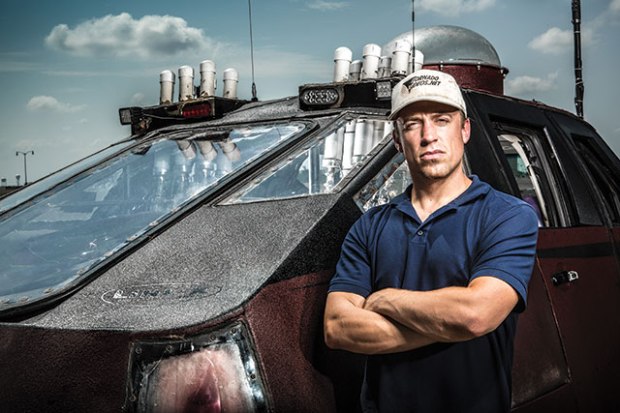 The raging storm was spawning tornado after tornado.

It was May 3, 1999, and Reed Timmer and three other college meteorology students watched beside Interstate 44 in Oklahoma while most of the tornadoes vanished as quickly as they formed. But then one didn’t — and it headed straight for them!

Realizing they couldn’t escape in their Jeep, the guys ran to a nearby highway overpass and took shelter (only later learning that’s not a good place to hide). The EF5 tornado barreled toward them, snapping trees like matchsticks, peeling asphalt from roadways and sucking everything in sight into its whipping, whirling core. Then, just before it reached the overpass, the tornado took a quick left turn, leaving the storm chasers shaken but safe.

Others weren’t so lucky. The tornado killed 36 people, injured nearly 600 and caused $1 billion in damage. During 85 terrifying minutes, it carved a 38-mile path of destruction.

No one can prevent disasters like that, but storm chasers like Timmer can help keep people safe by sending eyewitness reports to the National Weather Service, which issues tornado watches and warnings. And when those storm chasers are professional meteorologists, as Timmer is, they can gather critical data to better understand how tornadoes work.

“The biggest mystery about tornadoes is how big the wind speeds get right near the surface of the Earth,” he says — and that’s something fixed radar stations can’t measure.

Timmer first got interested in severe weather growing up in Grand Rapids, Michigan, where he became an Eagle Scout in 1995. (Yes, he earned the Weather merit badge.)

His storm chasing began when he attended the University of Oklahoma, which boasts one of the top meteorology programs in the country. Timmer has earned two degrees in meteorology there and is close to finishing an advanced doctoral degree.

For Timmer, a chase begins long before the skies turn dark. Throughout the spring and summer, he looks for just the right conditions for supercell thunderstorms to form: high dew point, strong winds and the collision of cool, dry air from the west with warm, moist air from the south. When conditions look right, he’ll plan a road trip that could take him hundreds of miles from home.

In the early days, planning meant borrowing a friend’s car and grabbing a video camera and a map. These days, he travels with three customized vehicles he calls Dominators, which feature roof-mounted radar, Internet connectivity and enough armor to outfit a tank.

The latest, Dominator 3, is based on a Ford F-350 crew-cab pickup truck and has 16-gauge steel armor strengthened with a polyethylene Kevlar composite, Lexan windows and gullwing doors that repel hail. When storms approach, special hydraulic systems lower the vehicle (to prevent wind from getting underneath) and drive spikes 8 inches into the ground to secure it. The vehicle is a 9,500-pound, 385-horsepower embodiment of the Scout motto, “Be Prepared.”

Even with the high-tech Dominators, Timmer and his team must still do a lot of driving around to find tornadoes, and they often come up empty (what storm chasers call a “blue-sky bust”). But Timmer has been lucky enough to get close to about 800 tornadoes. He’s even been inside a few, capturing high-definition video and measuring wind speeds. (Don’t try this at home!)

From 2008 to 2011, Timmer and Team Dominator appeared on Discovery Channel’s Storm Chasers, which followed teams of storm chasers across Tornado Alley, a region that includes Texas, Oklahoma, Kansas and Nebraska. After that show ended, Timmer created the on-demand web series “Tornado Chasers.” He also works as a storm chaser for KFOR, a TV station in Oklahoma City, and leads storm-chasing tours.

But he is perhaps most proud of his contributions to tornado science. For example, some of his up-close video is helping researchers better understand suction vortices, which are mini-tornadoes that appear in and around bigger tornadoes and might do the most damage to buildings.

Besides chasing tornadoes, Timmer has pursued other storms, including 15 hurricanes and Superstorm Sandy in 2012. During that storm, he encountered 40 inches of snow and nonstop lightning in the mountains of West Virginia, and he was glad for the winter-camping skills he’d learned in Scouting.

“I was never afraid because I knew that if we made a bad three-point turn on top of that mountain and slid into a ditch, we could just build a snow cave with a breathing hole, and we’d be totally fine,” Timmer says. “I was kind of hoping the vehicle would get stuck so I’d have an excuse.”

What to Expect: A meteorologist is a scientist who studies weather (what’s happening now or will happen soon) and climate (what happens over a longer period of time). Don’t expect to spend all your time chasing storms or giving forecasts on TV. More time is spent analyzing data using computers.

Job Outlook: The field is very competitive, but the number of jobs is growing, especially in private industry.
Education and Experience: You need a bachelor’s degree in atmospheric science or meteorology, which requires serious math and science skills. Take all the math classes you can in high school, as well as classes in physics, chemistry and computer science. If you want to teach or do research, you need a master’s degree or a Ph.D.

4 Comments on Storm chaser studies tornadoes from the inside out