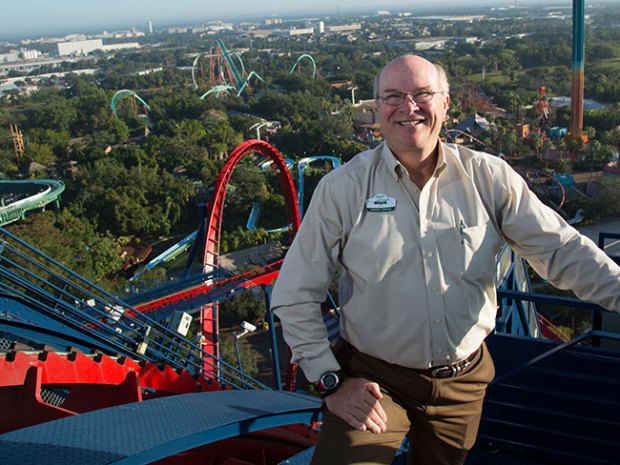 Mark Rose rode his first roller coaster when he was 6 years old. The place was the Coney Island amusement park in Cincinnati, Ohio. The ride was the Teddy Bear, so you can probably guess how exciting it was. Top speed: 8 mph. You can ride your bike way faster than that.

In the years since Rose conquered the Teddy Bear, he has ridden more than 100 coasters across America and around the world, often on family vacations. One time, he took his family to 17 theme parks in 17 days.

The Eagle Scout and Scoutmaster does more than just seek thrills. He creates them, too. The vice president of design and engineering for Busch Gardens Tampa Bay in Florida told BL about eight of his favorite roller coasters.

It takes nearly one minute to reach the top of Fury 325’s first lift hill, which towers at 325 feet. But things speed up quickly after that. Like an angry hornet chasing its target, you race through a 190-foot barrel turn and a high-speed S-curve, reaching 95 mph. Before the 3-minute, 25-second ride ends, you pass above the park entrance, under a pedestrian bridge and even into another state — South Carolina. Fury 325 is one of the world’s tallest and fastest giga coasters (meaning it’s at least 300 feet tall).

If you don’t mind getting lost in the woods, Apollo’s Chariot awaits. Rose’s favorite hyper coaster — which means it’s more than 200 feet tall — is built into the park’s trees and hillsides, so you never know what’s next. During the 2-minute, 15-second ride, you experience eight hills and 30 seconds of near-weightlessness. Tip: Sit in the back to maximize your air time.

Wing coasters put a pair of riders on either side of the track with nothing above or below them but air. (Yikes!) Rose’s favorite is Wild Eagle, which was the first ride of its kind in the U.S. It’s supposed to let you soar like an eagle, but good luck finding an eagle that can perform a zero-G roll, an Immelmann turn (where you go upside down and reverse course) and a corkscrew — all in 2 minutes and 22 seconds.

If you’ve ever wanted to ride a rodeo bull, this popular coaster offers a safe alternative. When it opened in 1999, it was the nation’s first hypertwister coaster, meaning it’s more than 200 feet tall and has a track that interweaves within itself instead of going out and back like a typical coaster. Best of all, Rose says, the 2-minute, 40-second ride is exceptionally smooth. Can’t say the same about riding a rodeo bull.

For pure, twisted fun, Rose likes Bizarro, a 3,985-foot coaster named for Superman’s evil twin. The coaster features seven inversions, including a 114-foot vertical loop that’s one of the world’s tallest. Add a tunnel of white mist shaped like Bizarro’s stolen Superman shield, explosions of fire and a pair of interlocking corkscrews, and you’ll see just how twisted Bizarro is.

Rose designed SheiKra himself. His original idea was to simulate going over Niagara Falls in a barrel, but SheiKra is actually 33 feet taller than Niagara Falls. After climbing a 200-foot lift hill, your floorless car freezes for a few seconds so you can think about what lies ahead. And there’s plenty to think about, including a zero-G drop straight down, a dive through a tunnel and a splashdown finale that drenches people waiting in line.

Most coasters start with a slow climb up a lift hill. Not this one. It uses a hydraulic catapult to accelerate from a dead stop to 120 mph in just 4 seconds, enough speed to power you up a 420-foot “top-hat” tower. From that dizzying height, you quickly descend to the ground, twisting 270 degrees along the way, so your body (if not your stomach) ends the trip right side up.

This classic wooden coaster on Mission Bay is 70 feet tall and tops out at 55 mph. But it has a lot going for it, including gorgeous views of the Pacific Ocean just beyond Belmont Park. On top of that, the coaster, built in 1925, is a National Historic Landmark. After the coaster was threatened with demolition in the 1970s, local citizens rallied to save it.