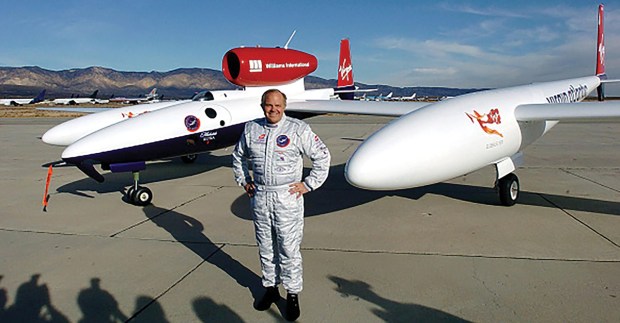 From the moment Steve Fossett conquered his first mountain as an 11-year-old Boy Scout, he knew a lifetime of adventure lay before him.

He never would have guessed the things he would accomplish.

In the summer of 2002, Fossett piloted a balloon on a breathtaking one-man quest. When he touched down in Australia after two weeks aloft, Fossett became the first human to fly solo around the world in a balloon.

In 2005, he made an even more startling flight: around the world in an airplane, alone, nonstop. It took him some 67 hours.

Fossett was declared missing at age 63 in October 2007. His airplane went down Sept. 3 in a remote section of southern Nevada, with Fossett likely out for a pleasure ride. Months of searching turned up no evidence.

At the time he went missing, Fossett was a Distinguished Eagle Scout and president of the National Eagle Scout Association.

Fossett still holds several records in sailing and aviation and continued to seek more until the day his plane went down. He loved to chase the impossible. After a successful career in business, he retired to a life of, as he put it, going farther, faster and higher than anyone else.

“There’s a winner of the race every year, but there’s only one person who holds a record,” Fossett said. “That’s a unique position to be in.”

As an adult, he was certainly faster and better at certain things than anyone else.

But it wasn’t always that way.

In a previously unpublished interview, Fossett told Boys’ Life what made him tick:

BL: What was the best lesson you learned as a youth?

SF: I figured out about age 12 that integrity was one of the highest principles — it should be treated as almost an absolute to deal honestly with others. I figured that out through Boy Scouts.

BL: What was the best lesson you learned too late?

SF: I wish I had paid more attention to what I was best suited to do. In high school, for instance, I tried to be a cross-country runner. Well, I’m the wrong body type for that. I should have tried to be a football player instead. Early in my career, I tried to be a computer technician, but I didn’t come from an engineering background. I wish I had thought more about where my abilities lay and pursued those more directly. I think I could have achieved the same success at an earlier age.

BL: Tell us about your road to Eagle Scout.

SF: My father was an Eagle Scout, and he made sure I got in Boy Scouts as soon as I was eligible. I climbed my first mountain — Mount San Jacinto in Southern California — when I was 11, and that got me started in my first adventure sport. I decided I very much liked this pursuit of achievements, whether it was working my way up to Eagle Scout or whether it was climbing mountains. So I became very achievement-oriented through my high school years.

BL: What was your greatest challenge?

This is my strength — that I can identify something that hasn’t been done before and plan how it can be done. Most people don’t do that. Most people aren’t doing the thing they’d really like to do because they are intimidated by the perception of its difficulty. If they sat down and thought about it, they would find that the things they want to do are more accessible than they ever would have imagined.

BL: Did you foresee a successful future for yourself?

SF: I’m happy to be a very optimistic person. I always think that good things are going to happen.

BL: O.K., harder question: Did others foresee success for you?

BL: What’s the best advice you would give today’s Boys’ Life reader?

SF: Figure out what you’d like to do and what you’re capable of doing, and choose those fields to go after. That’s the realistic approach. Everyone has to think about what interests them most and then figure out how to pursue it rather than follow in the footsteps of someone else. I would not suggest anybody try to be like me.