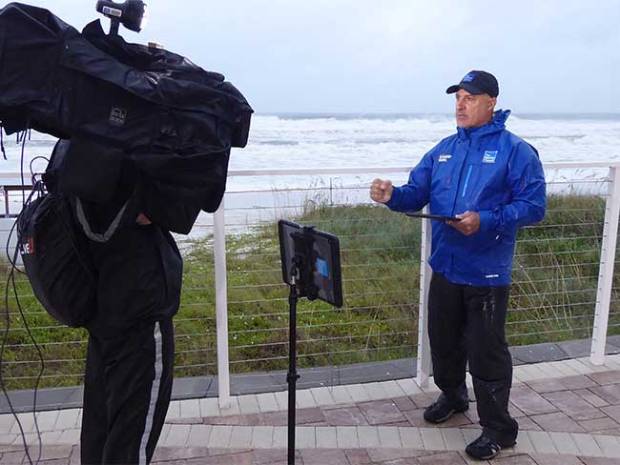 When Hurricane Harvey slammed into the Texas coast as a Category 4 storm in August 2017, its winds raging at 130 miles an hour, The Weather Channel meteorologist Jim Cantore was right in the thick of it.

During the flooding that followed, he was covering a fire rescue team as it evacuated residents from a flooded apartment building when he realized more aid was needed. He and other rescuers helped several people to safety, including one man in casts from a double knee operation.

“Instead of just standing there, we went over and helped people out of the boats and just kind of became part of the rescue,” Cantore says. “Anyone would have done it; I just happened to be there doing a broadcast.”

It’s just another part of the job for Cantore, who has become the public face of The Weather Channel’s disaster coverage. 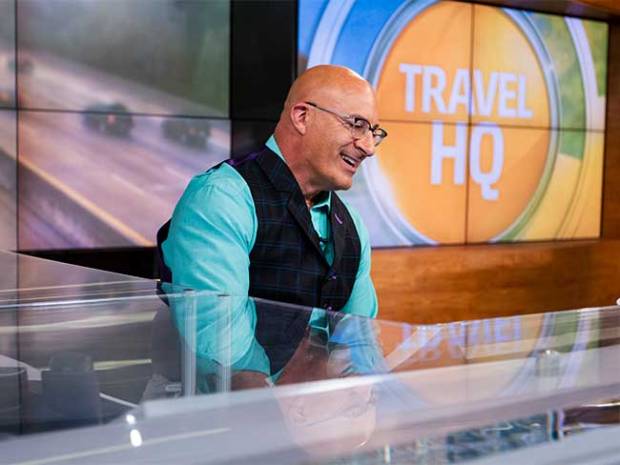 Like most meteorologists, Cantore caught the weather bug early when growing up in Vermont.

“I talked about it so much my dad finally said, ‘Why don’t you go study the weather? You don’t want to wake up 50 years from now and realize you spent your life doing something you didn’t like to do.’”

Those words resonated so much that, after high school, Cantore enrolled in Lyndon State College and graduated with a bachelor’s degree in meteorology in 1986.

Most aspiring broadcast meteorologists spend time at local TV stations before moving to national markets, but Cantore took a different path: After high school, he created some demo tapes and began sending them to various news outlets, and one of them ended up in the hands of The Weather Channel’s news manager. Not long out of college, Cantore found himself on the way to Atlanta, Georgia, for an interview.

He began his career there the next month as an intern.

A MAN FOR ALL SEASONS

Now in his 32nd year at The Weather Channel, Cantore has covered every type of severe weather the atmosphere can dish out, including hurricanes, tornadoes, ice storms, blizzards and floods. As the go-to guy when bad weather threatens, he’s often one of the first reporters on the scene before a storm, and that can make people nervous. The Weather Channel even made a commercial in which Cantore goes to the beach and everyone flees, leaving him alone.

“It was all I could do to keep a straight face while we were filming it,” he says. “I wish they’d run it more often.”

As a confirmed weather geek, Cantore feels very lucky to be a broadcast meteorologist.

“I really do have the best job in the world,” he says. “I get to work with the weather, and I genuinely believe I help people.”

Sometimes that help is quite literal. In January 2018, Cantore was covering a so-called “bomb cyclone” in Rockport, Massachusetts, that became one of the most intense in several decades. While doing a broadcast near the ocean in near blizzard conditions, he and his cameraman noticed a woman stuck in a car that was being engulfed by the storm surge. The two men pushed her car to safety before resuming their broadcast.

Not every assignment is so serious, though. Cantore is a huge fan of thunder snow, a rare phenomenon caused by positively charged ice crystals high in the atmosphere interacting with areas of negative charge. During the winter of 2015, he was sent to Plymouth, Mass., to cover a storm, while his colleague Reynolds Wolf was dispatched to Boston. During his broadcast, Cantore learned that Wolf was experiencing thunder snow — and he wasn’t. Dejected, he did a faceplant into a snowbank.

“It was really demoralizing,” Cantore remembers. “I felt like a kid who didn’t get what he wanted for Christmas.”

Then it was time to do his broadcast, and as the camera started to roll, a peal of thunder rang out. Cantore leaped into the air, fists pumping, and yelled, “We got it, baby! We got it!”

There was another crack of thunder and then another. In all, six thunderbolts split the air, and Cantore was ecstatic.

“It was right over the top of us,” he says. “I went from complete demoralization to euphoria.”

Now that’s a guy who loves his job.

One of the things Cantore enjoys the most about his career is the teaching aspect — not just reporting on the weather, but explaining the processes that cause it. And he’s well aware that his timely alerts and warnings can actually save lives. Cantore still credits his father’s advice for all his successes: “He told me that there’s plenty in life to make you unhappy, so don’t think about the pay — do what you love.” 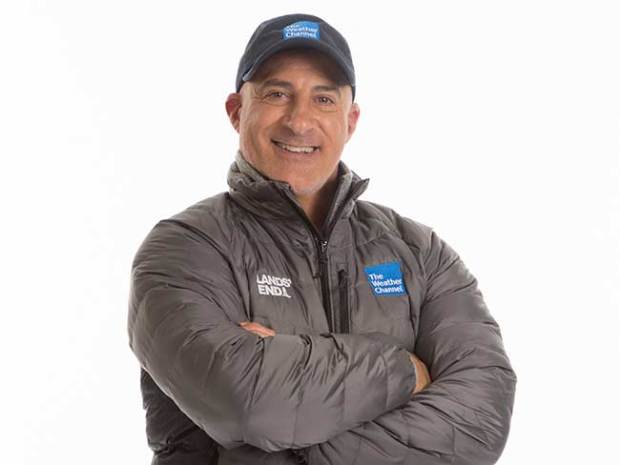 WHAT TO EXPECT: Meteorologists are scientists who study Earth’s atmosphere and use mathematical models to predict the weather in both the short and long term. They use various instruments to measure temperature, humidity, pressure, wind speed, rainfall and air quality, and use data from satellites to improve their forecasts. Climatologists are meteorologists who study how the atmosphere changes over long periods of time.

JOB OUTLOOK: Between now and 2026, the demand for meteorologists is expected to grow by 12 percent, with the private sector producing most new jobs. Not all meteorologists work on TV, although they’re the most visible. You’ll also find them working for airlines, government agencies such as the National Weather Service, private companies, public utilities and universities. Reported job satisfaction is high.

EDUCATION AND EXPERIENCE: “You can do it with a B.A. in science,” says Cantore, “although because it’s so science- and math-based, it may take you five years to get a degree.” If you want to teach meteorology or work in atmospheric research, you’ll probably need a master’s or Ph.D.

SALARY: Annual pay ranges from around $32,000 to more than $100,000, depending on experience and education level. The average salary for all types of meteorologists is around $51,000. The highest average salaries are paid by the National Weather Service, at about $72,000 annually.