An orienteering competition is a great way to test your map-and-compass skills. 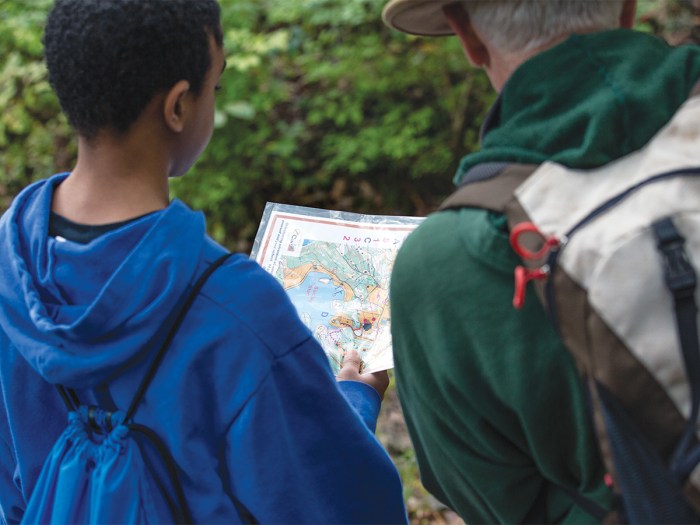 Orienteering is a race in which participants use a highly detailed map and a compass to navigate their way between checkpoints along an unfamiliar course.

The Greater Cincinnati Scout-O Camporee is a weekend of orienteering competitions in Loveland, Ohio, hosted each fall by the Blue Jacket District of the Dan Beard Council. Troops and crews from the surrounding area come together to test their skills on a course that has been designed by Orienteering Cincinnati, a local club. 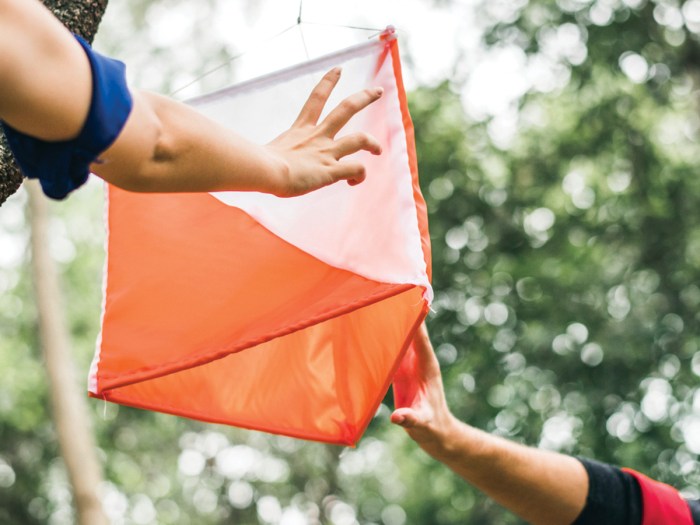 In orienteering competitions, checkpoints — called “controls” — are placed in an area of 1 to 2 kilometers. In cross-country orienteering, every competitor must visit the same controls in numerical order as quickly as possible. In other formats, they can get to the checkpoints in any order. Regardless, it’s a challenge in route choice and stamina.

At the Blue Jacket District Scout-O, competitors use electronic punching devices at each checkpoint and at the start and finish line to record their times.

“It’s a lot of running,” says Andrew Wolfzorn, a 17-year-old from Troop 55 in Loveland, Ohio, who earned first place in a Scout-O solo race. “You have to get in the right mindset … clear your mind out and get in that race mentality.” 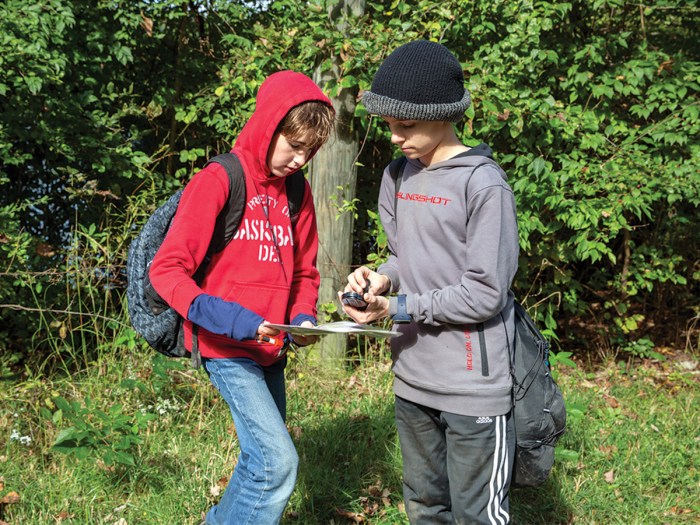 Cross-country courses are graded by age and skill, and can vary in length. Course levels, indicated by color, progress from novice to expert: white (beginner); yellow (intermediate); orange (advanced); and brown, green, red and blue (expert). The winner in each age and course level is the fastest competitor who has all the correct control punches.

“On the easier ones, the checkpoints might be right on the trail,” says Parker Moyer, 13, from Troop 850 in Cincinnati. “On some of the harder ones, they might be in the middle of the forest.”

Parker recorded the fastest time (by one second!) in one race on the yellow course. 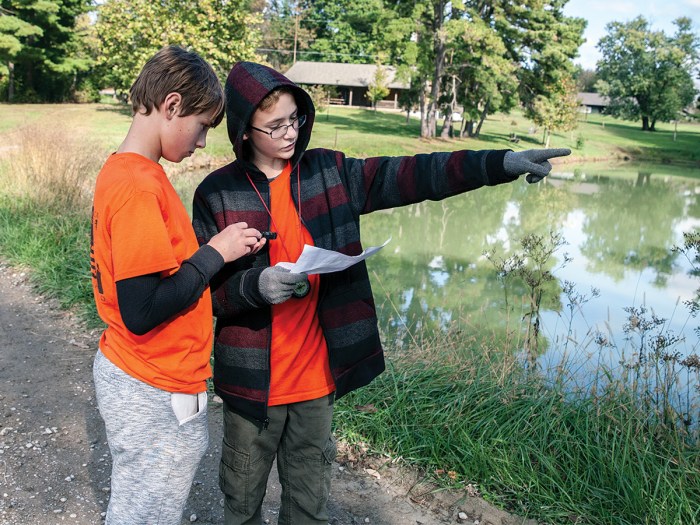 Taking a bearing is measuring a direction from one point on the ground to another. Hold the compass in one hand, centered on your body. Rotate your body and the compass until the direction-of-travel arrow points in the direction you want to go. Rotate the bezel of the compass until the north end of the orienting arrow lines up with the north end of the magnetic arrow (usually red). Determine the bearing by reading the number on the bezel directly opposite the bearing index. 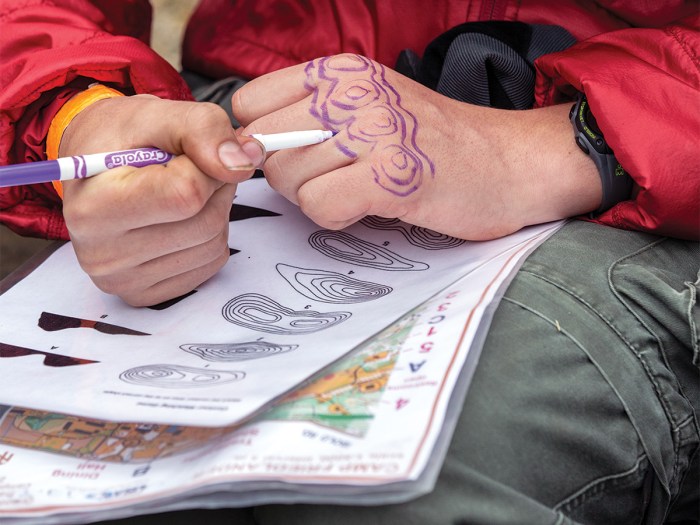 A topographic map tries to show the form and shape of the land by the use of contour lines. If you walk all the way around the base of a mountain and always stay at the exact same elevation, you are contouring around it. The line you follow is called a contour line. Now do it again — but walk a line 20 feet higher in elevation. You have walked a second contour line.

Symbols on the map represent features on the ground. A topographic map will show things like gullies, pits, boulders, rocky ground and impassable cliffs.

“You have to be smart about where you’re going,” Parker says. “If you’re heading through a darker green place on the map, it means the forest is thicker.

“It might be faster to take what you thought was the long way around.” 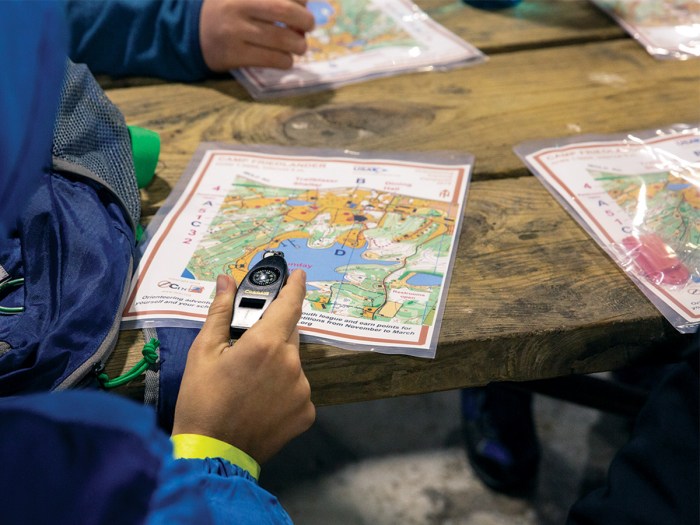 #6: Orienting a Map With a Compass 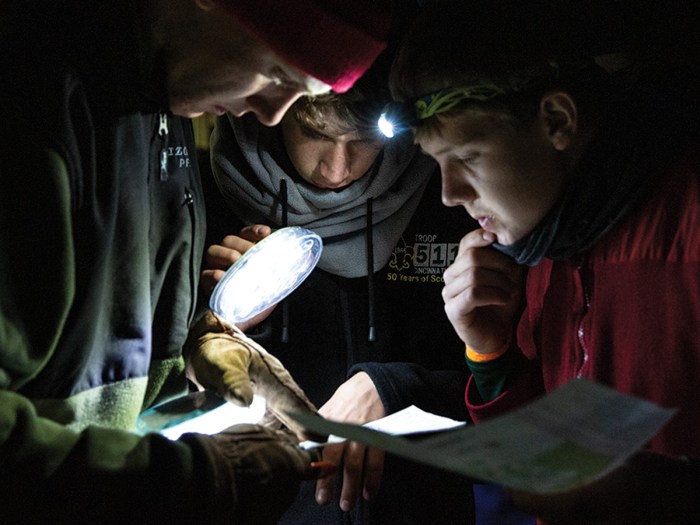 #7: Measuring Distance on a Map

You can measure distance on a map by using a compass scale, a ruled compass edge or any straight edge. Most maps include a scale relating distance on the map to distances on the actual terrain.

“You have to pace yourself,” Andrew says. “Use the key on the map to figure out how far you have to go.” 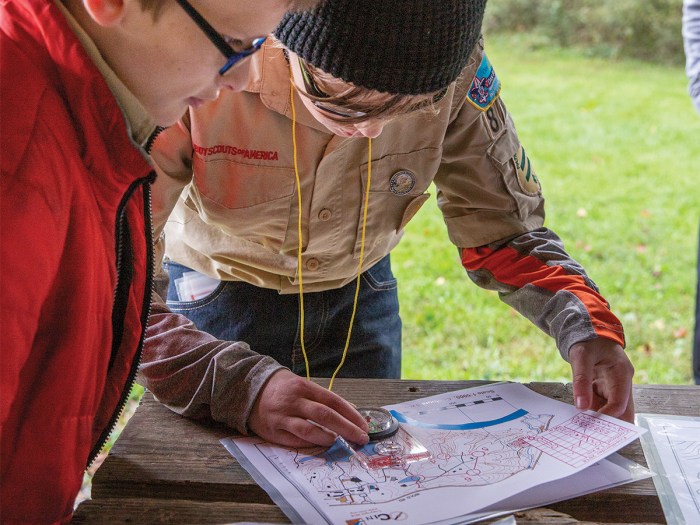 #8: Judging Distance on the Ground

For some people, judging distance is the hardest part of orienteering. But you can make it easier with some preparation. One way of judging distance is by pace-counting or counting every time your right (or left) foot touches the ground over a given distance. For example, if you lay out a 100-meter course, the number of paces and the amount of time it takes you to walk from one end to the other is your walking pace per 100 meters. Do this multiple times to get a more accurate measurement. 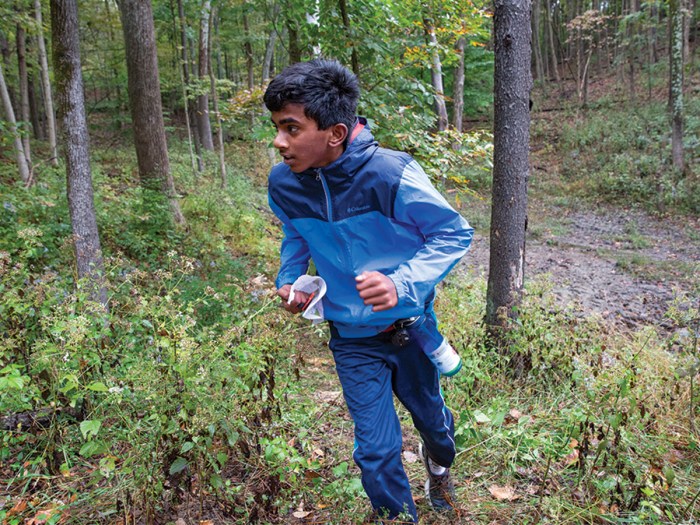 #9: What About Running? Or Going Uphill or Downhill?

As your stride lengthens, the distance you cover increases and the number of paces per 100 meters will decrease, as will the time it takes you to cover that distance. Measuring your running pace and time is exactly the same as measuring your walking pace. Because this is much more active, it is even more important that you run the course several times to get a true measure.

Your stride will shorten as you move uphill, so the number of paces and the time to cover 100 meters will be more than it would be on level terrain. You can get downhill measurements on the same course you use for the uphill by traveling in the opposite direction. Gravity wants to pull the downhill walker or runner along at a faster clip. Your stride will lengthen and the number of paces and time per 100 meters will decrease.

“At the end of one course, we were all sprinting trying to find the last one,” says Jonathan James, 13, from Troop 114 in Cincinnati. “No one else had found it. Then we found it and we felt a nice sense of accomplishment. Then we just sprinted to the finish line.”

Get started in orienteering by first learning how to use a map and compass at go.scoutlife.org/mapcompass.

6 Comments on 9 Things to Know About Orienteering