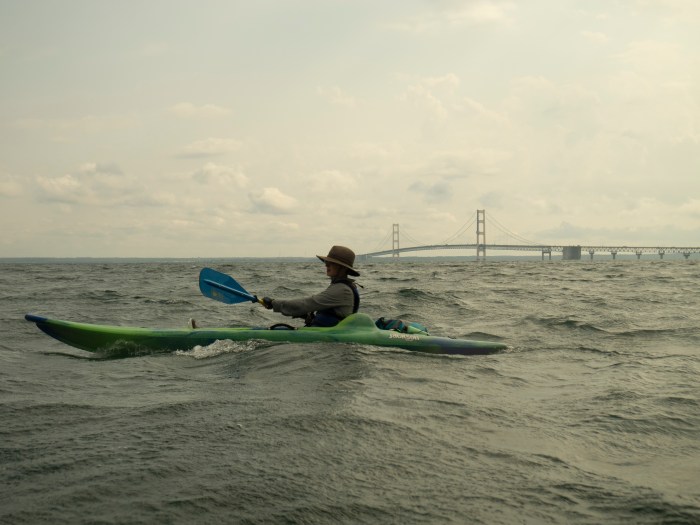 What’s so great about the Great Lakes?

For starters, they have about 6 quadrillion gallons of water.

That’s a great amount of water.

“It blew me away,” says Albert Garbacik of Troop 755 in Northville, Michigan.

Albert was one of six Scouts who participated in the Great Lakes Kayak Adventure, managed through Michigan Crossroads Council’s Cole Canoe Base. The guys got to check out all kinds of cool stuff around Michigan’s Upper Peninsula (known as the U.P.) and learn new things about their home state.

The Best of the U.P.

The Great Lakes Kayak Adventure was born from the Cole Canoe Base staff’s love of the Great Lakes. They wanted a unique way to share some of the best of what the U.P. has to offer.

Participants get to use sit-on kayaks, dipping their paddles into the waters of three of the five Great Lakes: Michigan, Huron and Superior. The adventure begins when they kayak from Lake Michigan to Lake Huron below the famous Mackinaw Bridge.

“I liked the boats,” says Brian Cadreau from Troop 261 out of St. Clair, Mich. “I would actually want one. You can use them for fishing, and if they get a bunch of water in it, it’s not going to sink.” 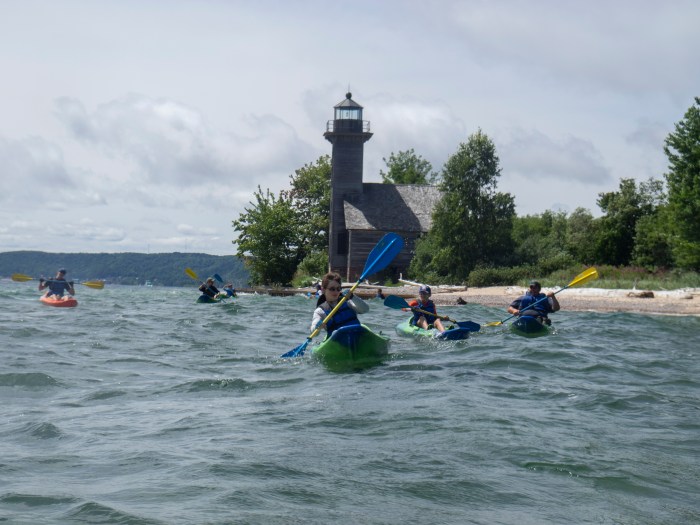 A support crew on land transported the group — along with its boats and gear — to different areas, allowing the guys to visit as many neat places as they could in five days.

Though all the guys are Michiganders, they found their home state had a few surprises.

“I didn’t expect the Tahquamenon Falls to be in Michigan,” says Brent Cadreau, twin brother of Brian. “I didn’t think Michigan had waterfalls — only streams and lakes.”

Actually, Michigan is said to have nearly 200 named waterfalls, with all but one in the U.P. Between one kayak put-in and another, the guys saw Munising Falls, Miners Falls and Tahquamenon Falls.

“The Upper [Tahquamenon] Falls we couldn’t kayak,” Albert says. “But it was a really cool sight. It was just beautiful. And the lower falls you could walk through it, and it was cool to feel the water rush by you as you stood on the rock.”

View From the Water

Exploring Pictured Rocks National Lakeshore was a highlight. America’s first national lakeshore, Pictured Rocks features sandstone cliffs soaring anywhere from 50 to 200 feet above the water, with small caves and arches carved in the rock. Throw in some weather-sculpted formations that look like castles, animals and people, and the whole thing just looks awesome.

And what better way to see all this than from the water?

“You can see a lot more,” says Michael Loftus from Troop 755. “From land you only go to the one lookout on the cliffs, but from the water you can go along the cliffs and see all the different rock formations and the colors.” 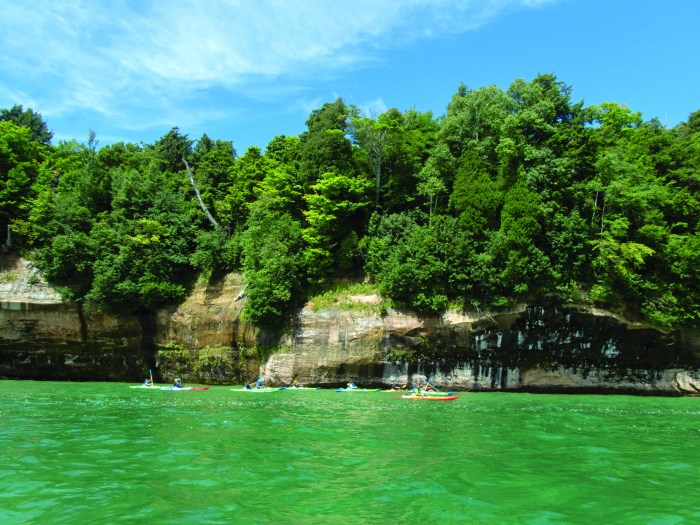 Those hues come from water dribbling out of cracks in the sandstone, carrying along bits of iron, manganese, copper and other minerals that leave vivid stains on the rocks.

“I did not expect Pictured Rocks to look like that at all,” says Austin Waller, also from Troop 755. “You know, you hear people talk about Yellowstone or other big parks, but no one ever really talks about this park.”

The guys also soaked in some history at the Great Lakes Shipwreck Museum at Whitefish Point. For centuries, traders have used the Great Lakes to transport goods, cargo and passengers. The combination of a lot of traffic and quickly changing weather made for a lot of shipwrecks. 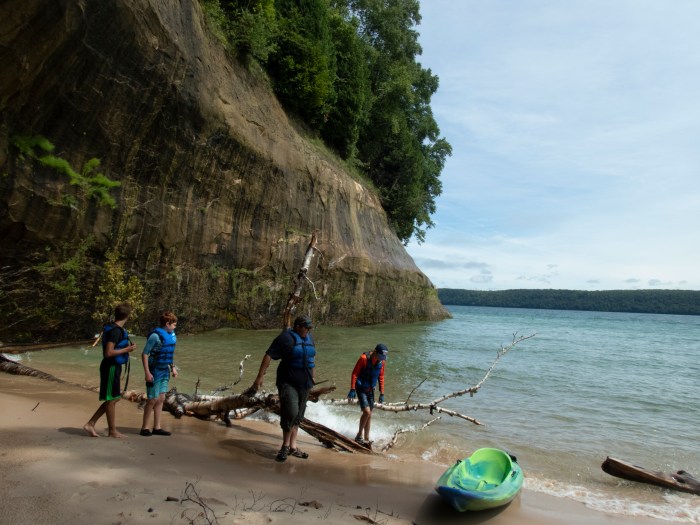 Of the 550 known major shipwrecks in Lake Superior, at least 200 are near Whitefish Point, making the area known as the “Graveyard of the Great Lakes.” The most famous among these is the SS Edmund Fitzgerald, the largest to have ever sunk in the Great Lakes.

After exploring the museum, some of the guys walked outside to the actual point, where there was a wall of fog over the water that day.

“You can really understand how a lot of ships could wreck,” Michael says. “The fog was some of the thickest I’d ever seen.”

The Great Lakes Kayak Adventure ended with a final paddle down the Rifle River in middle Michigan back to Cole Canoe Base.

When it was over, not only had they witnessed firsthand much of the majesty of the U.P., but they also learned a few things about kayaking that will be helpful for any adventures down the road.

“On the water you need something that will breathe, but you want to keep the sun off you,” Albert says. “And, well, my shirt got really smelly after a while.”

Check out more photos of this amazing adventure below!