Happy Holidays! Count down the days until December 25th with these very funny kid’s Christmas jokes sent in by Scout Life readers. We guarantee this clean holiday humor will help you “ho ho ho” like a certain jolly old elf. 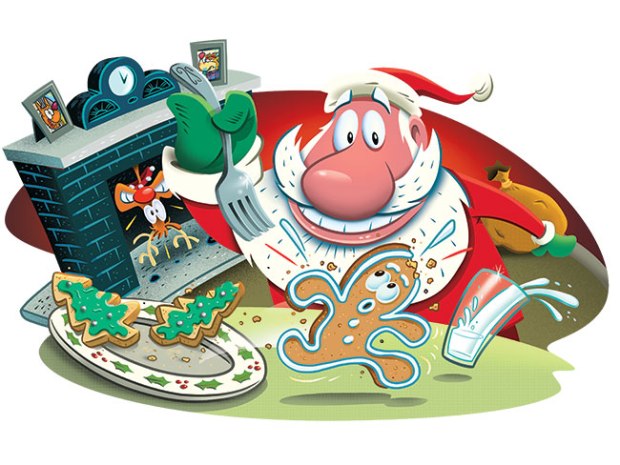 Caroline: What happens when Santa Claus gets stuck in a chimney?
Jill: Tell me.
Caroline: He gets Claustrophobia!

Drake: You find it in December but not in any other month. What is it?
Gina: I don’t know.
Drake: The letter D!

Maggie: What is the most dangerous kind of body part?
Sara: I don’t know.
Maggie: Mistletoes.

Zachary: Which of Santa’s reindeer are dinosaurs afraid of?
Lee: No idea.
Zachary: Comet! 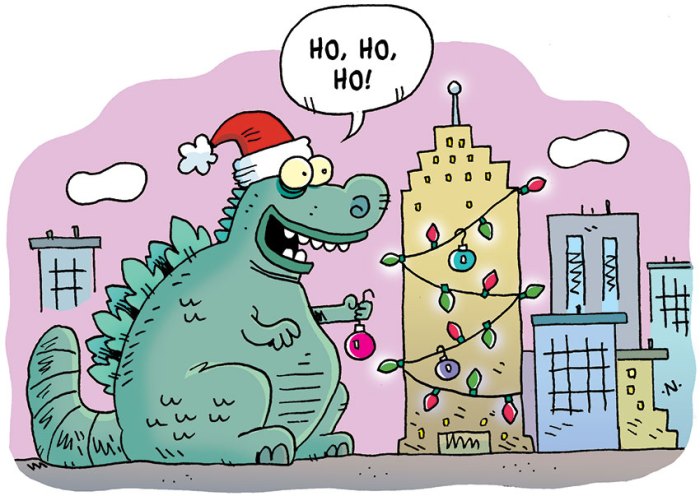 Henry: What did one gingerbread man say after all the others were eaten?
Lauren: I haven’t the foggiest.
Henry: “It’s hard to bake new friends.” 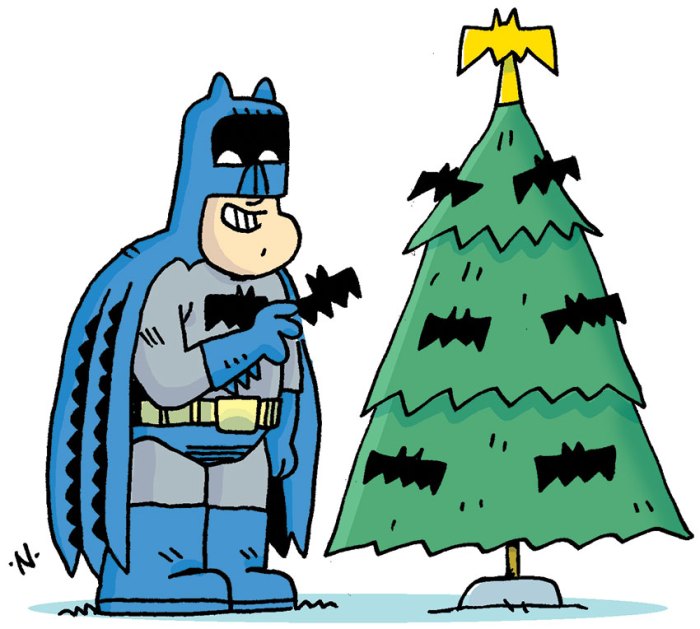 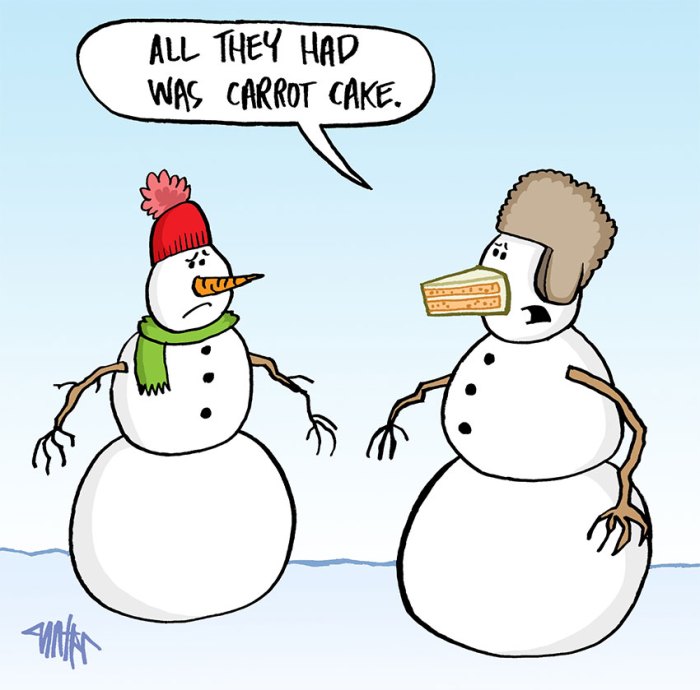 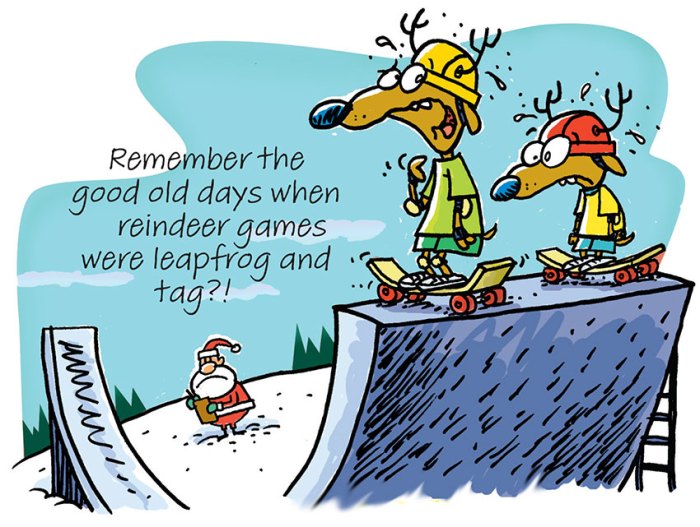 Carter: What do elves do in school?
Miley: What?
Carter: Presentations!

Arjun: What do you call a snowman with a six pack?
Alexander: I haven’t the foggiest.
Arjun: An abdominal snowman. 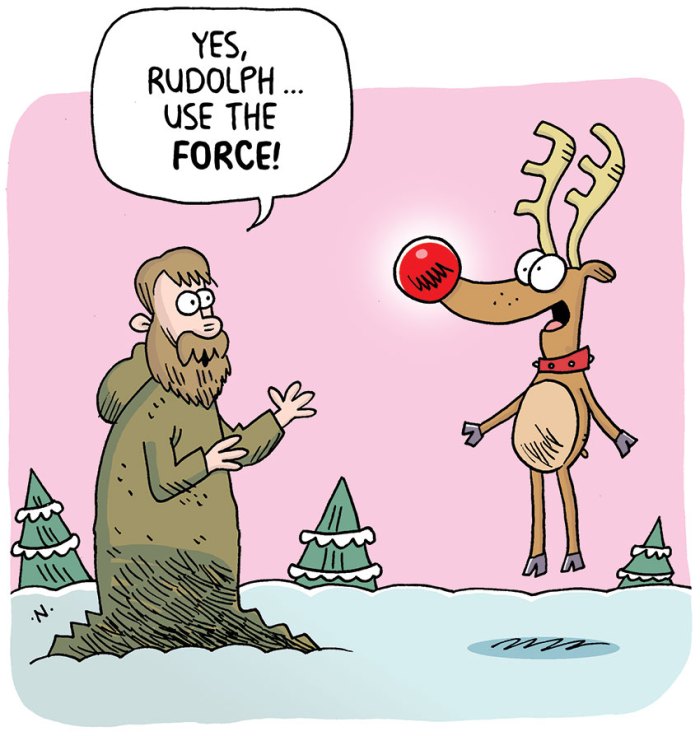 Nathaniel: What do you call Santa Claus with unfolded clothes?
Tyler: I don’t know. What?
Nathaniel: Kris Wrinkle.

John: What did the gingerbread man put on his bed?
Zack: What?
John: A cookie sheet. 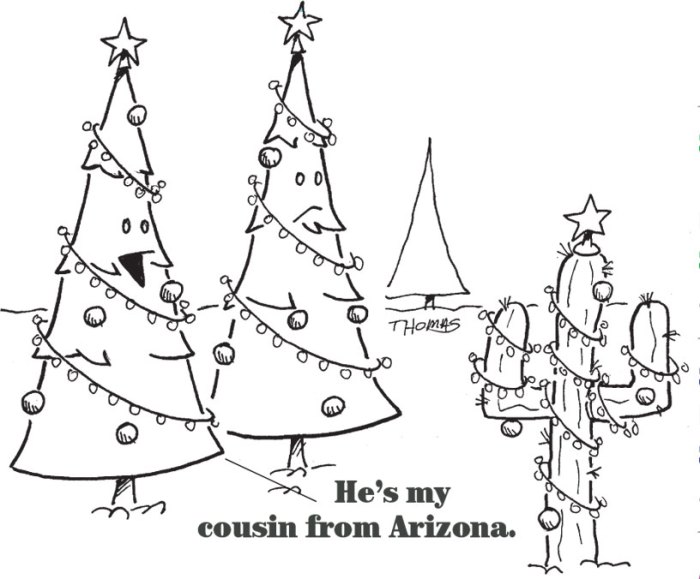 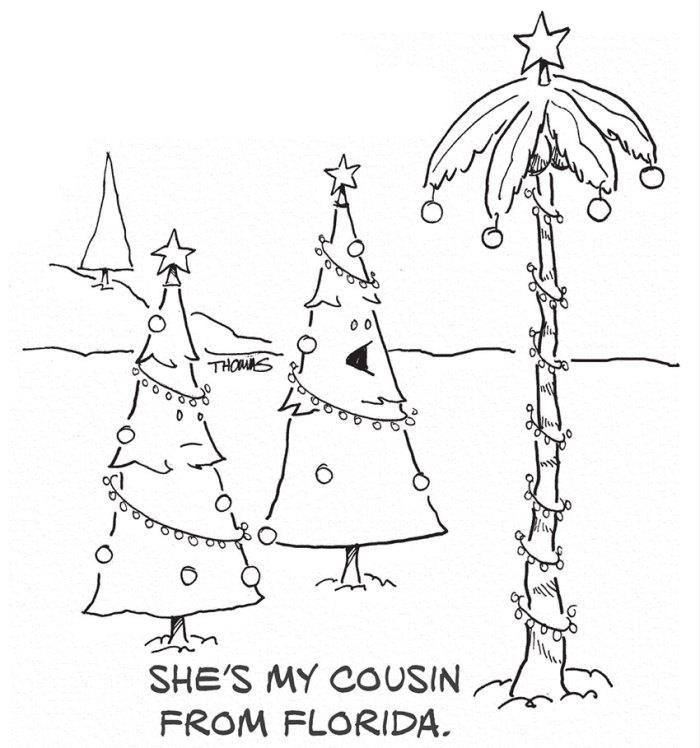 Ben: What did the peanut butter say to the grape on Christmas?
Jack: I don’t know.
Ben: “‘Tis the season to be jelly.” 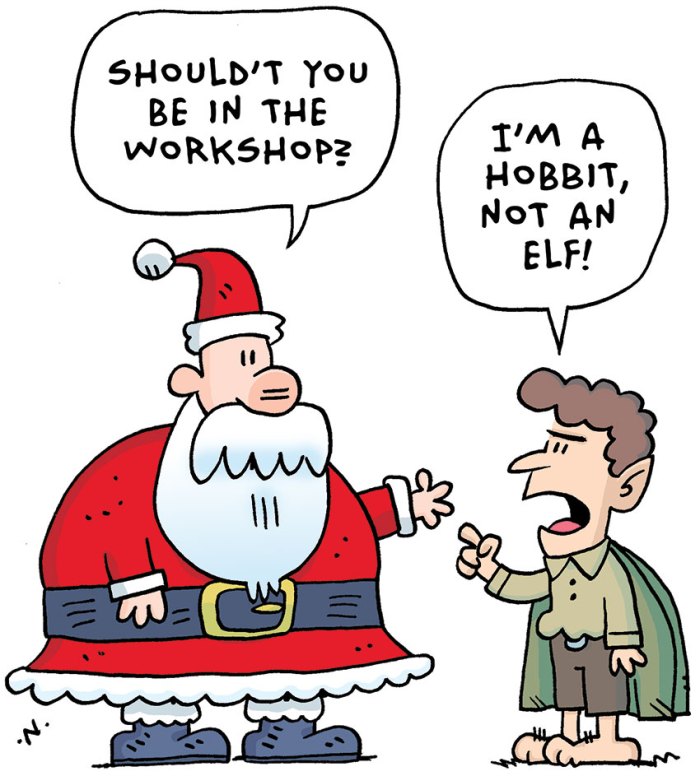 Isaac: What is the Grinch’s favorite holiday?
Anthony: I don’t know.
Isaac: Grinchmas!

Jeremy: What do you get when you cross a snowman with a vampire?
Brian: I’m stumped.
Jeremy: Frostbite!

Peter: Someone must be mad at Frosty the Snowman.
Isaiah: Why?
Peter: Because they gave him two black eyes. 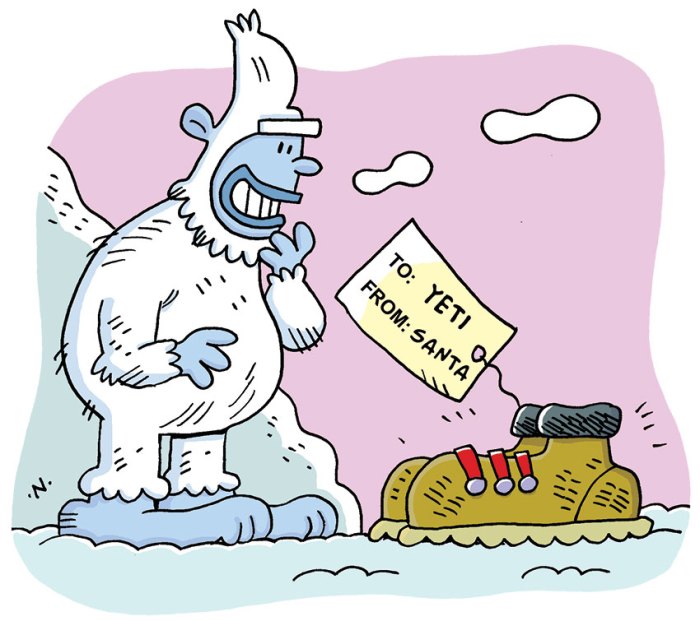 One night a Viking named Rudolph the Red was looking out the window when he said, “It’s going to rain.”

His wife asked, “How do you know?”

Caleb: What does Christmas have to do with a cat lost in the desert?
Ben: Beats me.
Caleb: They both have sandy claws.

Laure: Why do mummies like the holidays so much?
Benny: Why?
Laure: They’re into all the wrapping.

Will: What’s a good time for Santa to come down the chimney?
Bill: What?
Will: Anytime! 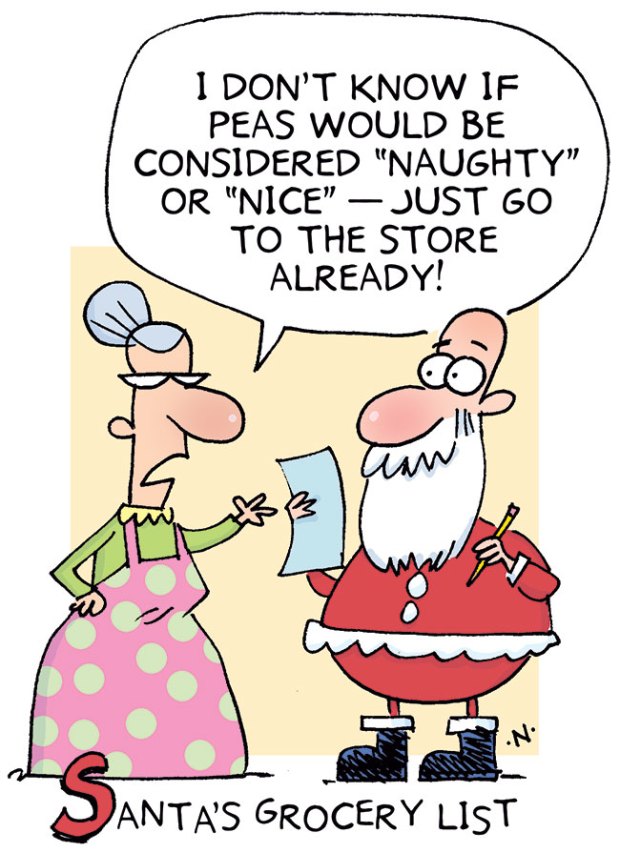 Noah: What is a bird’s favorite Christmas story?
Mike: I haven’t a clue.
Noah: The Finch Who Stole Christmas.

Rylan: What does a grumpy sheep say at Christmas?
Ryan: What?
Rylan: “Baaaa humbug!” 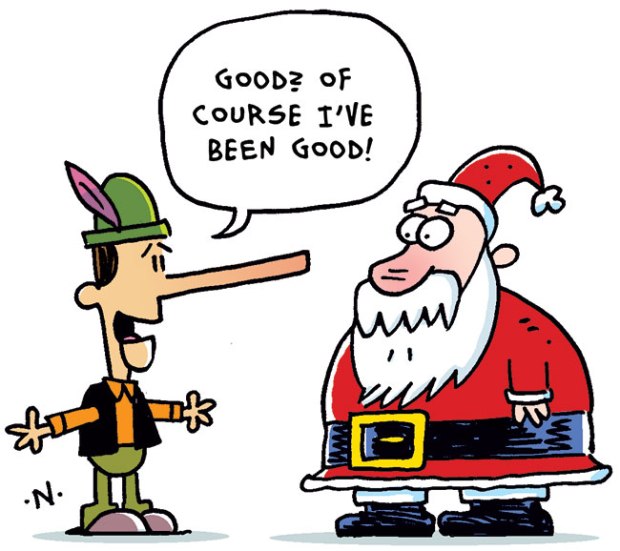 Casen: What do you call a shark that delivers toys at Christmas?
Austin: I’m stumped.
Casen: “Santa Jaws!”

Will: Where do snowmen keep their money?
Bill: Beats me.
Will: In a snow bank. 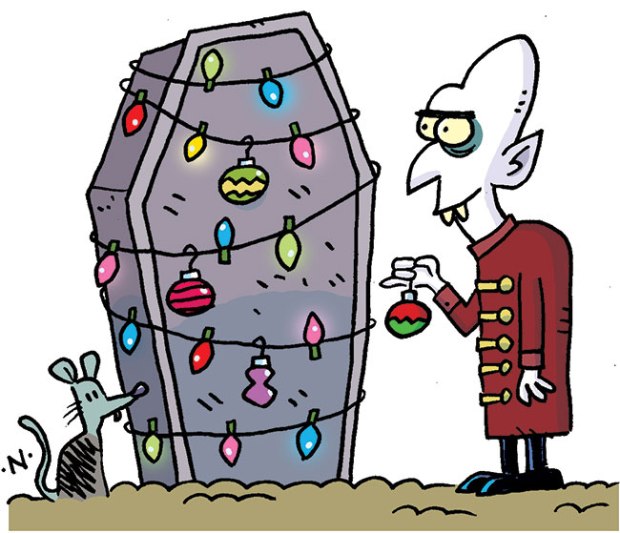 Bill: Why are Christmas trees so fond of the past?
Laura: Why?
Bill: Because the present’s beneath them.

Sister: What are you giving Mom and Dad for Christmas?
Brother: A list of everything I want! 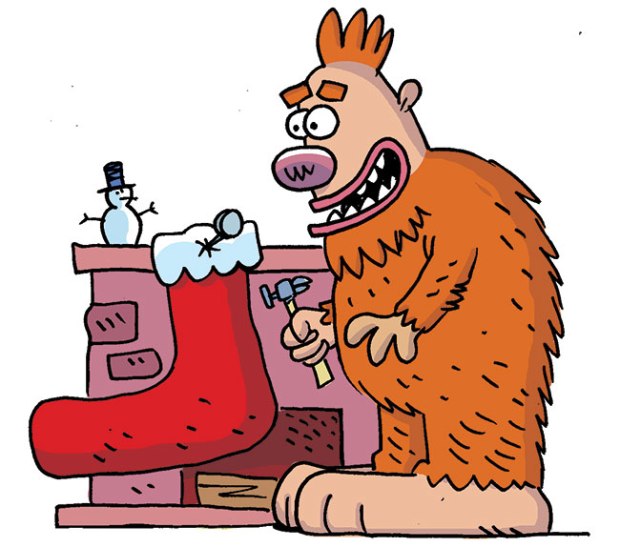 Chris: What do snowmen like to do on the weekend?
Chrissy: What?
Chris: Chill out. 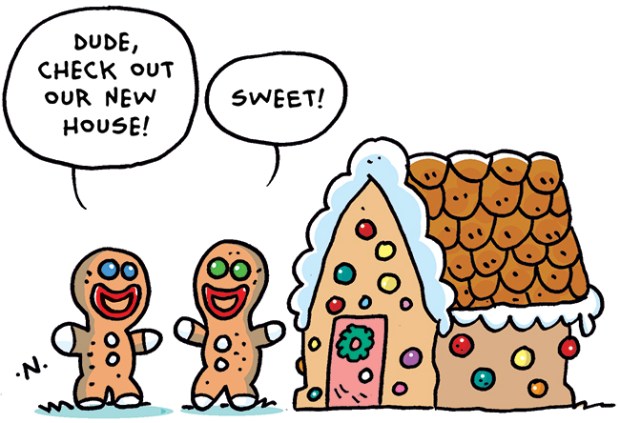 Josh: What does Jack Frost like best about school?
John: What?
Josh: Snow and tell. 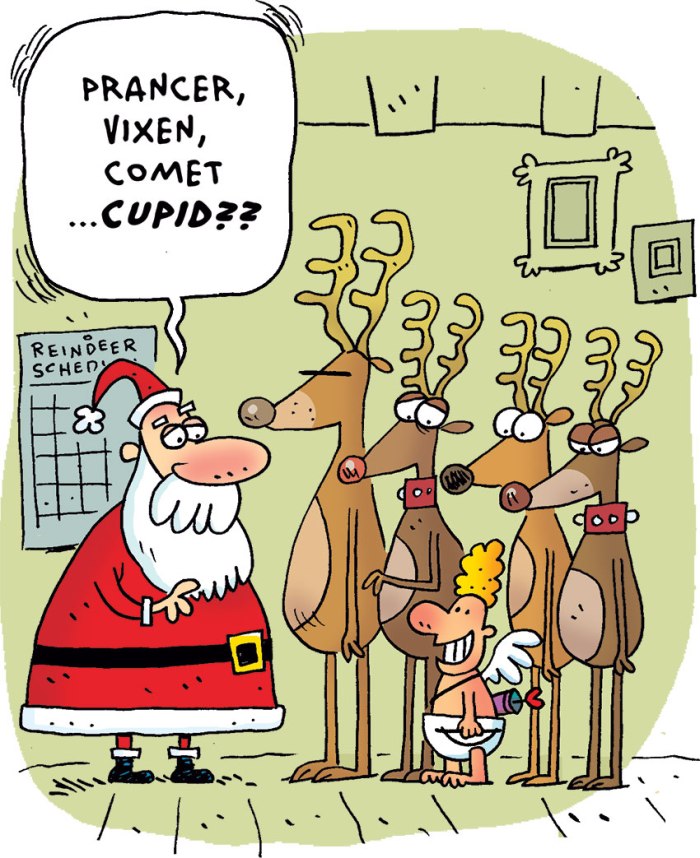 Zoey: What do you get if you cross an iPad with a Christmas tree?
Johnny: I don’t know. What?
Zoey: A pineapple!

A book never written: “How to Decorate a Tree” by Orna Ment. 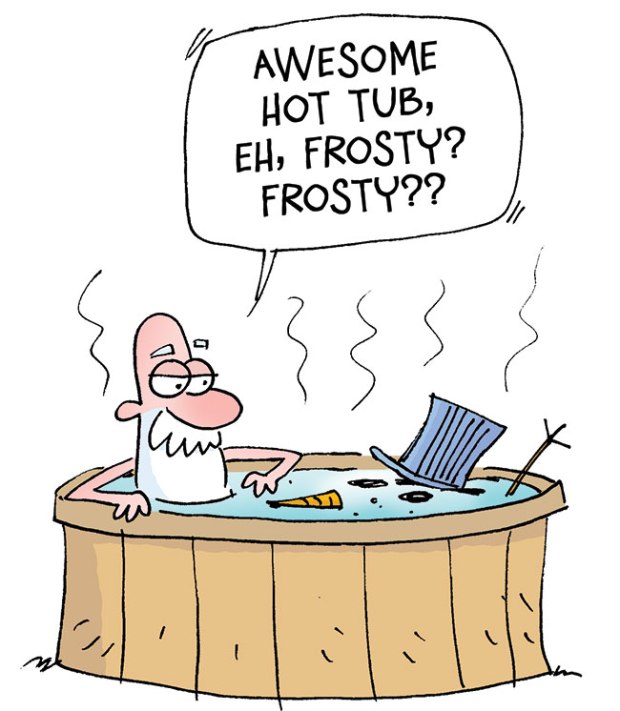 Moe: What are you going to give your little brother for Christmas this year?
Joe: I haven’t decided yet.
Moe: What did you give him last year?
Joe: The measles.

Pedro: What has a jolly laugh, brings you presents and scratches up your furniture?
Ordep: Beats me. What?
Pedro: Santa Claws. 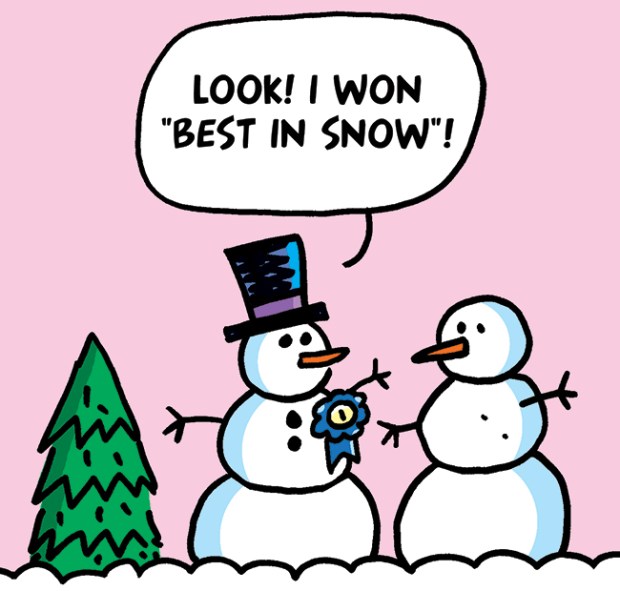 Jacob: What do road crews use at the North Pole?
Jason: I don’t know.
Jacob: Snow cones!

Travis: Where do polar bears vote?
Anthony: Where?
Travis: The North Poll! 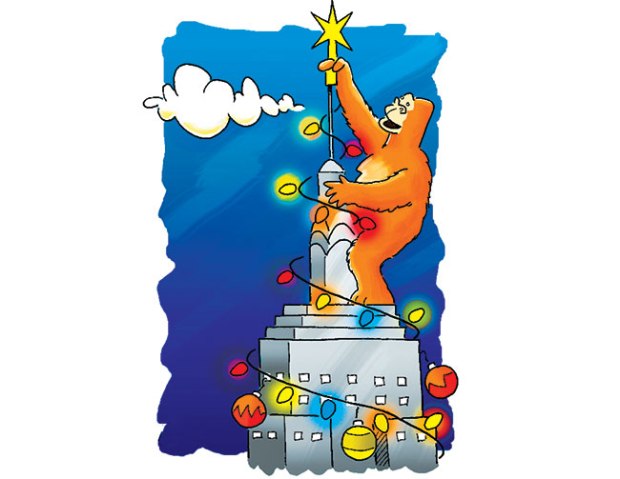 Luke: What do elves do after school?
Jeffrey: I don’t know. What?
Luke: Their gnome work!

Chance: Why did Rudolph get a bad report card?
Nate: Why?
Chance: Because he went down in history. 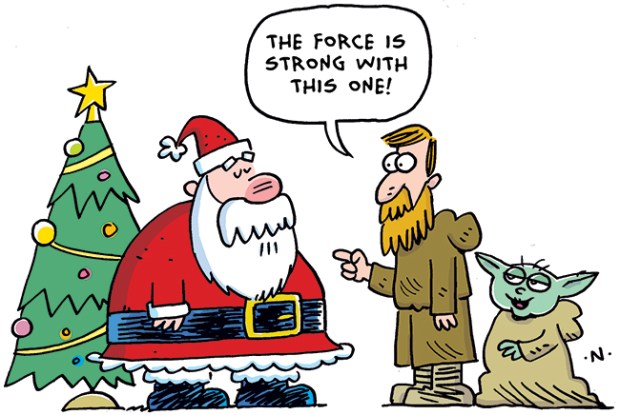 Amanda: What’s the difference between Santa’s reindeer and a knight?
Robert: What?
Amanda: One slays the dragon, and the other’s draggin’ the sleigh.

Wayne: How much did Santa’s sleigh cost?
Crystal: I’m stumped.
Wayne: Nothing. It was on the house!

Daniel: What do ﬁsh sing during winter?
Josh: What?
Daniel: Christmas corals. 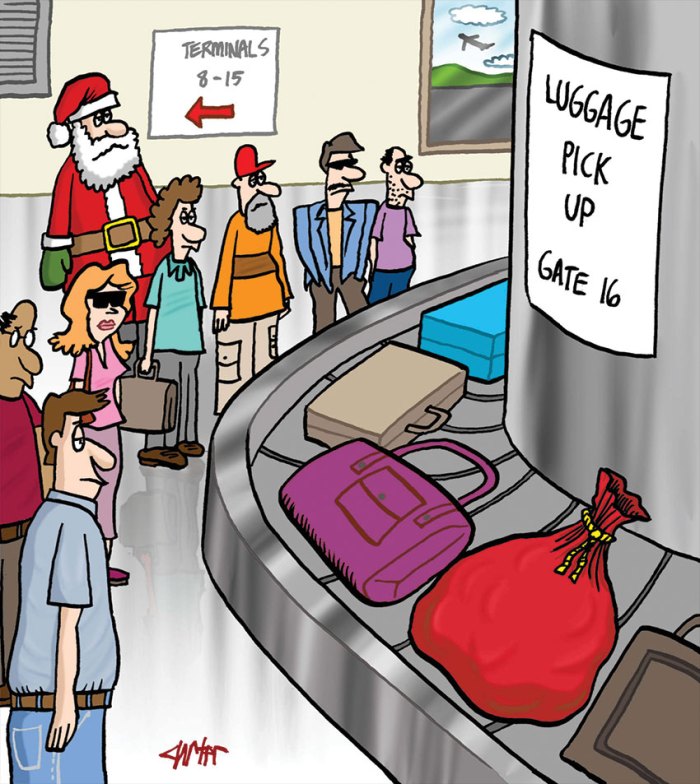 When asked about his job, Frosty always replies, “There’s no business like snow business.” 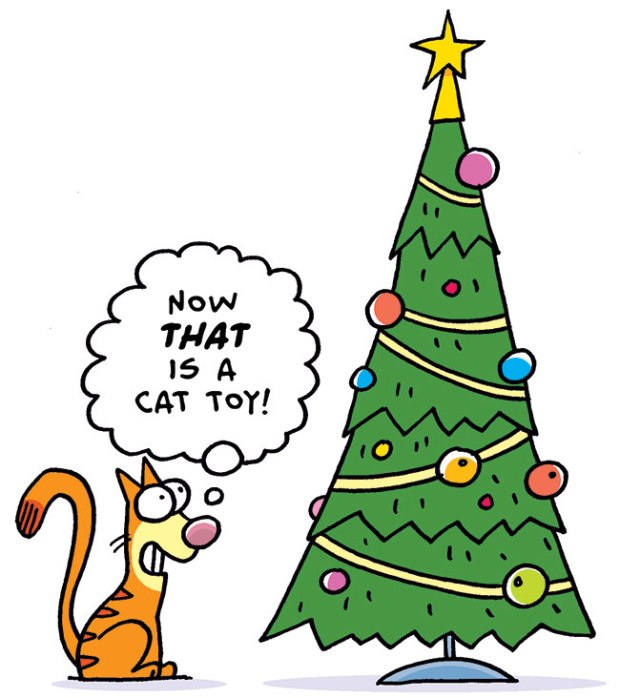 Steve: What is a Christmas tree’s favorite candy?
Tim: Not sure.
Steve: Ornamints.

Warped Wiseman wonders: “Does Santa Claus refer to his elves as ‘subordinate clauses’?” 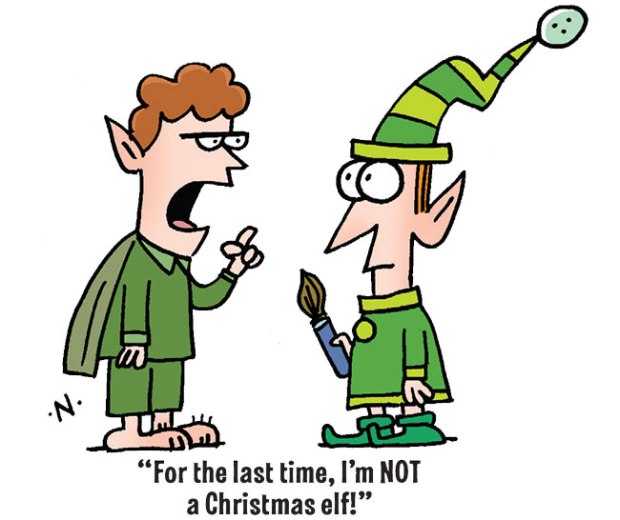 Sam: What do you get when you eat Christmas ornaments?
Devin: Not sure.
Sam: Tinsel-itis! 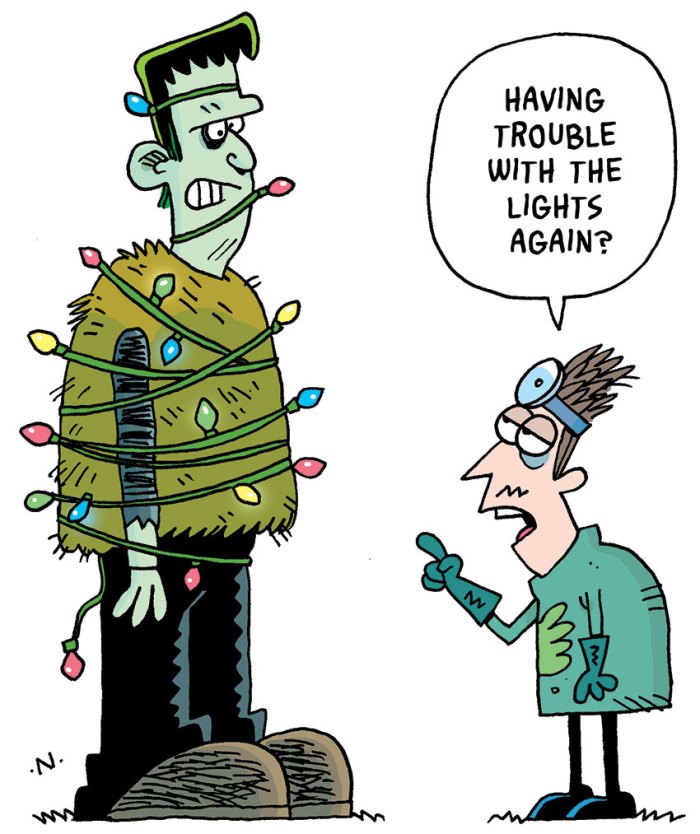 Trey: What do you get when you cross a snowman and a dog?
Brandon: I give up.
Trey: Frostbite.

Josh: Why was Santa’s little helper depressed?
Mark: Dunno. Why?
Josh: Because he had low elf esteem! 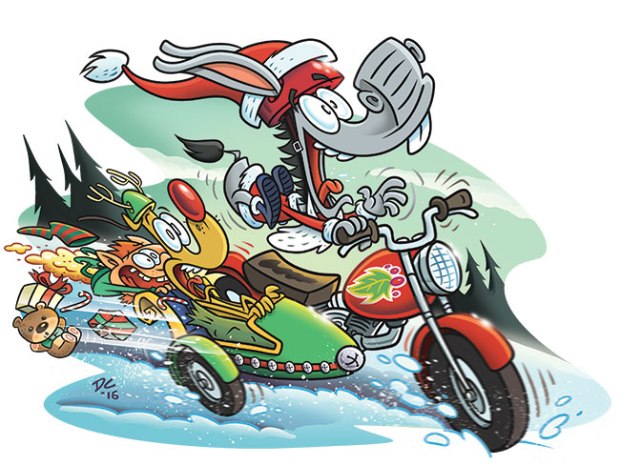 Joke submitted by Pedro the Mailburro
Comic by Daryll Collins

Sam: Why do Dasher and Dancer love coffee?
Pam: Why?
Sam: Because they’re Santa’s star bucks!

A book never written: “What Did I Do Wrong THIS Year?” by Kole N. Stocking.

Andrew: What did the pepper say on its holiday card?
Luke: I don’t know.
Andrew: “Season’s greetings.” 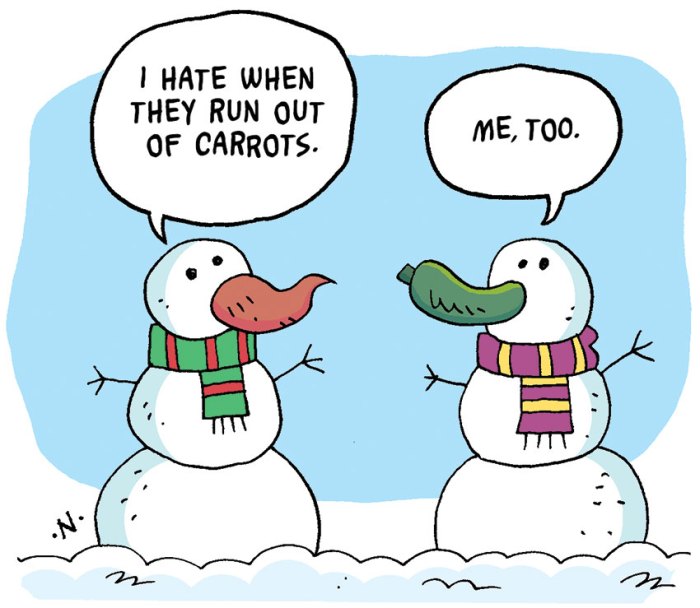 William: What did one snowman say to the other snowman?
David: What?
William: Do you smell carrots? 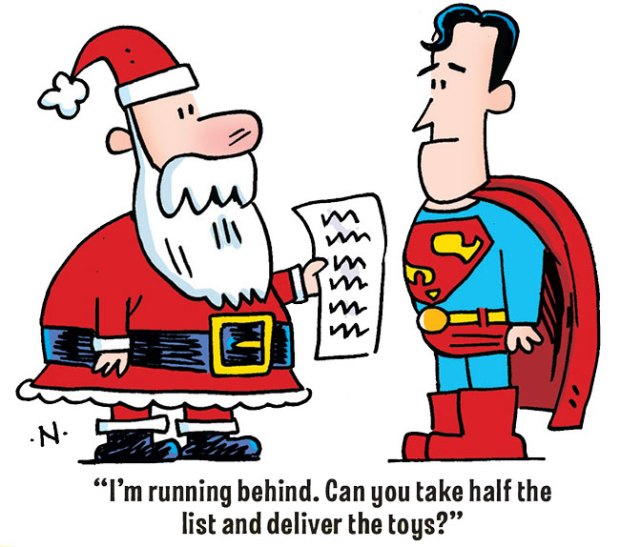 Pee Wee: What did the reindeer say to the football player?
Westy: I don’t know.
Pee Wee: “Your Blitzen days are over!”

Colton: How does a sheep say “Merry Christmas”?
Tammi: How?
Colton: “Fleece Navidad!” 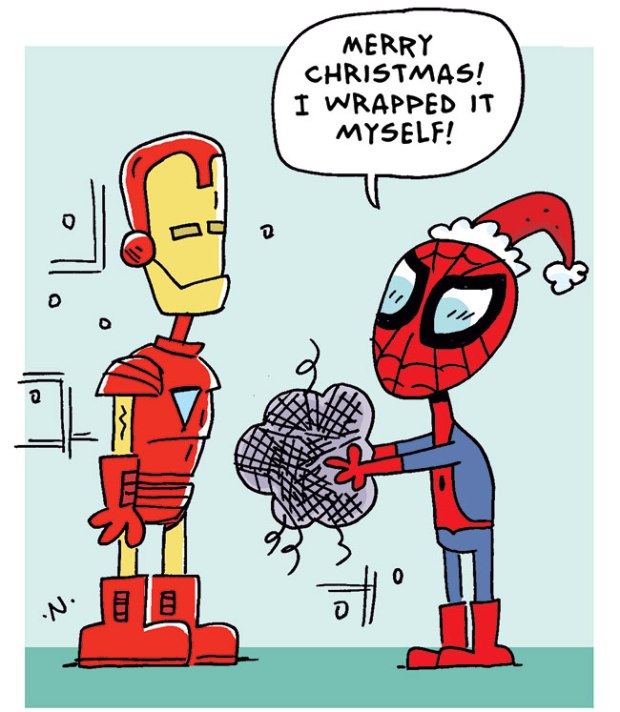