HERE’S WHY YOU ARE AN ENVIRONMENTALIST: You like to go camping in a forest. Or catch fish. Or sit by a campfire. Or snorkel around coral reefs.

Global warming is threatening those simple things. It’s bringing warmer temperatures to forests so bark beetles breed faster and kill the trees. It’s cutting down snowfall on mountains so there’s less runoff, and rivers and streams are drying up. It’s creating drought, making chaparral so brittle that you risk a dangerous wildfire when you light a campfire. It’s causing warmer ocean water, which harms coral reefs.

WHAT IS GLOBAL WARMING? It is an increase in the Earth’s average temperature. Since the mid-1800’s, the average temperature of the planet has gone up by one degree. If one degree doesn’t sound like a big deal, it’s the difference between a frozen Popsicle and a sticky puddle on the floor.

The Intergovernmental Panel on Climate Change, co-winners of the 2007 Nobel Peace Prize, is made up of 2,000 scientists from more than 150 countries. They say human activity has caused the planet to warm up. What kind of activity? Turning on lights, powering computers, heating homes, driving cars, flying planes, and manufacturing furniture or toys or steel.

All this activity requires the burning of fossil fuels to release energy. Coal, oil and natural gas are fossil fuels. They are carbon-based substances that scientists say formed millions of years ago even before dinosaurs roamed the Earth. When burned, the carbon inside them hits the air and becomes carbon dioxide.

Carbon dioxide is a greenhouse gas, meaning that it lets sunlight in, like a glass ceiling on a greenhouse, but doesn’t let heat out. In other words, carbon dioxide acts like a blanket over the Earth, trapping heat and warming up the planet more than is healthy.

WHAT ARE PEOPLE DOING ABOUT IT? With every problem comes an opportunity. The problem of global warming has created some cool solutions.

Alternative fuels like ethanol and biodiesel are made from corn and sugar crops, as well as vegetable oil. There are “veggie” cars on the road today. (Some even have the faint aroma of French fries.) There are about 25 different brands of hybrid cars, which combine a gas engine with an electric one to cut down carbon dioxide emissions. Other alternative fuel vehicles, such as electric and hydrogen fuel-cell, are starting to zoom onto our roads.

Renewable energy is a way to generate electricity with resources that will never run out. Unlike coal or natural gas, solar power, wind power and hydropower (from water) are renewable. A company in Australia is building a 1,600-foot solar tower in a desert that will bring electricity to 100,000 homes. Twenty percent of the world’s electricity comes from dams, which use water to create energy. And one typical wind turbine can generate enough power for 1,000 homes.

WHAT CAN YOU DO ABOUT IT? Everyone has a carbon footprint. Just as you leave a footprint in the sand on the beach, you leave a “footprint” of carbon emissions every day.

We need to think about a more sustainable way of living, meaning one in which we don’t waste valuable resources but use those that will never run out. Click here to see some simple things you can do today to Go Green!

Cambria Gordon is coauthor of “The Down-to-Earth Guide to Global Warming.” Scholastic, http://www.scholastic.com, $15.99 softcover. Ages 8 and up.

“This Is My Planet: The Kids’ Guide to Global Warming” by Jan Thornhill. Maple Tree Press, http://www.mapletreepress.com, $10.95 softcover. Ages 9 to 13.

“You Can Save the Planet: 50 Ways You Can Make a Difference” by Jacquie Wines. Scholastic, http://www.scholastic.com, $4.99 softcover. Ages 9 and up.

21 Comments on Getting a Green Grip 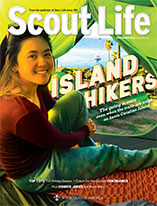