The technique of growing plants without soil is called hydroponics. It’s simply growing plants in water. Hydroponics is not only useful. It can be fun. Clear a place on your window sill, and you too can grow vegetables, flowers and fruits.

Plants don’t need soil as long as they have five things: food, water, light, air and support. You can provide all five in a hydroponic garden. 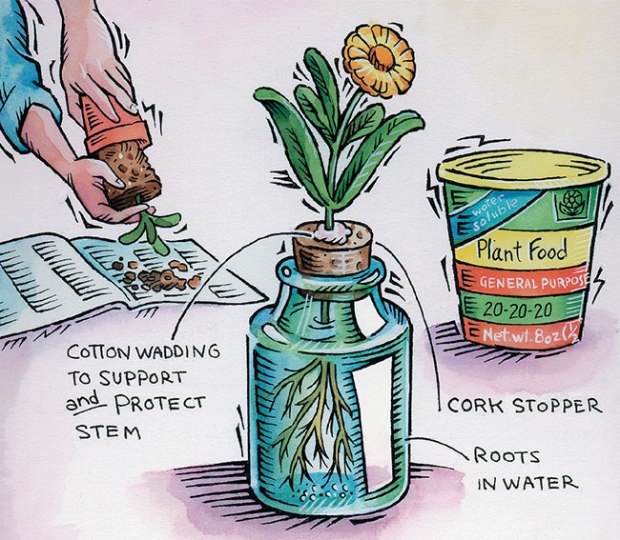 This will get messy, so go outside or spread newspapers over your work area. Carefully remove the small houseplant from its pot. Place one hand over the soil surface, with the stem between two fingers, and turn the pot upside-down. Tap the bottom of the pot while gently easing the plant out.

Step 1: Gently brush all the soil from the roots.

Step 2: Carefully thread the plant stem through the cork stopper and place the roots into the glass container filled with lukewarm tap water.

Step 3: Use the cotton wadding to fill any gaps between the plant stem and cork stopper. Be careful not to squeeze the stem.

Step 4: Move your plant to a sunny location and watch it grow!

After about a week, pour out the water and refill.

Your plant will be hungry by now, so add a general-purpose plant food according to label directions. Look for a food labeled “water soluble.” You can find it at garden centers, hardware stores or grocery stores.

Change the water and the plant food solution about once a month.

The term hydroponics was coined in 1936 by a scientist in California who planted a tomato in a tub of water. The plant grew more than 25 feet tall!

Once word got around, people were growing plants in baskets, on patios and on rooftops using only water and a little plant food.

People who have eaten at EPCOT Center in Walt Disney World have experienced hydroponics. Researchers there produce fresh tomatoes, lettuce and cucumbers from hydroponic gardens.

The National Aeronautics and Space Administration (NASA) is using hydroponics to provide fresh food for astronauts. On the frozen continent of Antarctica, scientists are testing hydroponic techniques that may be used on missions to Mars.

Many commercial growers around the world are turning to hydroponics as an alternative to traditional farming. More food can be produced, and weed problems are eliminated.

Strawberries are a popular hydroponics crop in Australia. Tomatoes, lettuce and a variety of herbs lead the way in Ontario, Canada. In the United States, cucumbers and tomatoes are grown in water.

25 Comments on How to start a hydroponic garden