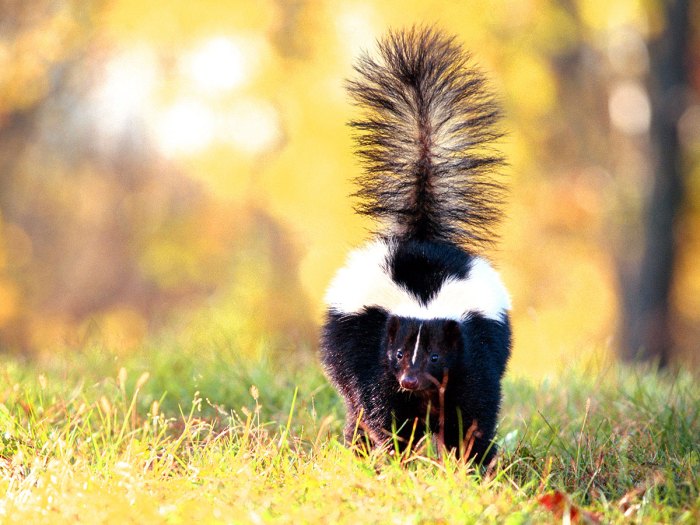 When you think “skunk,” you probably think “stink.” But these critters are usually sweet-natured and helpful — they eat a lot of pests! Of course, it doesn’t help that skunks belong to the scientific family called Mephitidae, a word that means “stink” in Latin.

What’s the secret behind skunks’ odor? Skunks have two scent glands at the base of their tails that produce a super-strong sulphur compound (think rotten eggs but much worse). They can keep only about a tablespoon of this liquid on tap, and it takes about 10 days for their body to make more. So they use this spray sparingly — only when they really feel threatened (like if someone startles a mother with her kits). 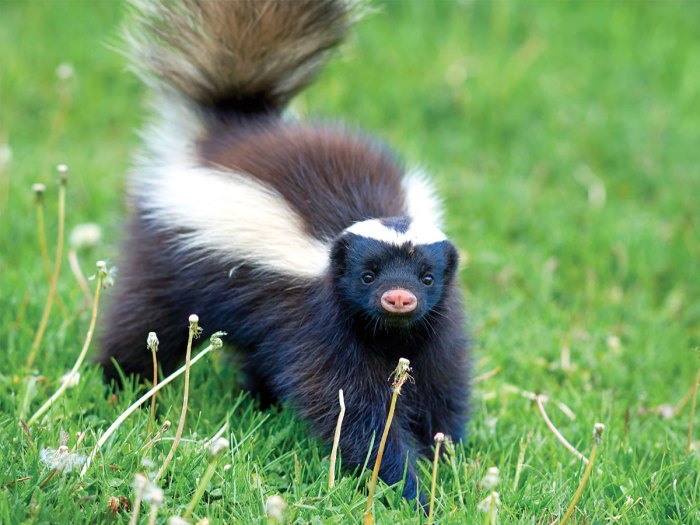 Skunks prefer to warn trespassers about what’s in store for them if they come too close. For starters, all skunks have those characteristic black-and-white stripes or spots, which serve as the main signal for other animals to beware. Depending on the species, skunks might also stamp their feet, hiss, raise their tail or even do a handstand on their front feet before spraying.

When skunks use their spray, they can aim it accurately up to about 10 feet. So get out of the way if you ever see any of these warning signs! If you or your pet do get sprayed, see how to quell the smell at go.scoutlife.org/skunk

Skunks can be curious and not see you as a threat. In that case, don’t make sudden movements, and let the skunks do their thing and move on.

See how one cyclist dealt with a skunk family in this video:

Few wild animals actually attack skunks, and only about five of every 100 skunk deaths are caused by predators. Mammals can smell skunk spray very well, whereas most birds don’t have a good sense of smell. So it’s no surprise that the main predators of skunks are owls — particularly the great horned owl.

The 10 skunk species around today are unique to the Western Hemisphere, from Canada to Argentina (however, skunk fossils have been found in Europe). The most familiar species in the U.S. is the striped skunk; the others include the hooded skunk, four species of hog-nosed skunks (the largest reaches up to 18 pounds) and four species of spotted skunks (the smallest weighs just over a pound).

Of all the species, only the hooded skunk is increasing in numbers; the others are decreasing or stable. Two of the spotted skunk species are in serious decline.

Skunks might live up to seven years in the wild, but most survive only about three years. Since skunks can’t see very well, the main cause of death is being hit by cars. Other causes include starvation in winter and diseases.

Unfortunately, a fair number of skunks die from rabies — more often in Midwestern/Plains states, California and Texas. If a skunk is acting aggressive (which is not typical), is unable to walk or move normally (wobbling/falling over) or has excessive salivation, then back away and call your local SPCA wildlife department, wildlife rehabilitator or state wildlife agency right away. 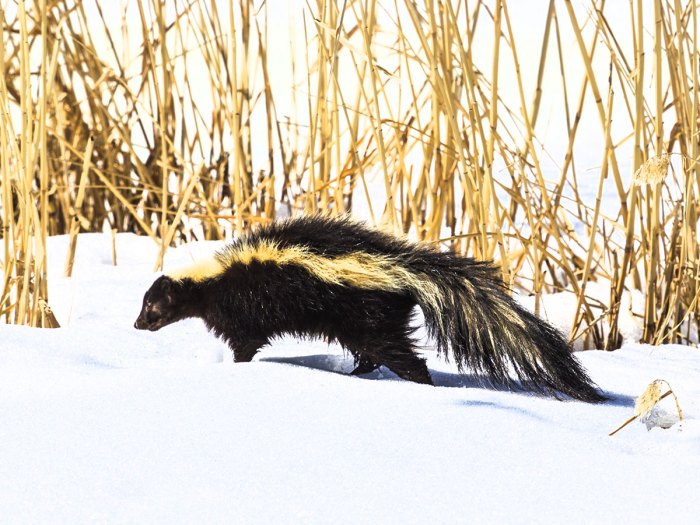 Skunks are mostly nocturnal, but they’re also active at twilight. Don’t be surprised, though, to see one during the day. There are times when they need to leave their burrow to find food. Since adult males are nearly always solitary and do not help raise young, daytime foraging is much more likely done by mothers that have to feed their little ones. Even though they’re weaned at about two months, kits stay with their mom between eight and 12 months.

Although insects are a favorite food, skunks are true omnivores and will eat just about any small creature they can find (earthworms, rodents, snakes and birds), plus eggs and plants.

In cool climates, skunks are much less active in the winter. They lower their body temperature (not as low as with true hibernation) and spend most of that time in dens. Females will overwinter in a den together, but males usually den alone.

May all your encounters with these creatures be fun, safe and odor-free!