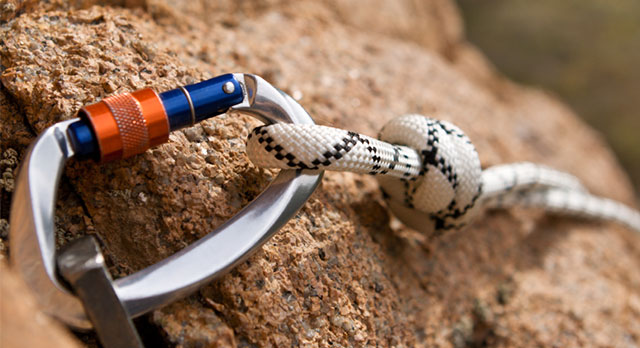 Q. I have a carabiner that says it can hold 21 kN. I know that’s the amount of shock the clip can take, but what’s the maximum constant weight that could be applied to it?

A. I asked climbing equipment expert Bill Belcourt from Black Diamond to tackle this one. Here’s what he says: kN stands for kilonewton, a measurement of force. Stamped on the side of all carabiners you’ll find a kN number that tells you how much force your climbing gear can withstand. This is important because carabiners are climbing safety equipment and they must be strong enough to handle the force (and weight) of someone falling. When an average-size man falls 60 feet, the peak force on a carabiner at an anchor point on the rock stopping his fall is going to be about 9.1 kN.

Now that we have that out of the way, let’s talk about the maximum constant weight. That’s tricky, mainly because your carabiner isn’t rated for a maximum working load. It’s designed to take forces, not lift heavy things. That said, do a little math and you can easily figure out the pound equivalent of your carabiner’s kN rating. In this case, 21 kN x 225 lbs. (equal to one kN) = 4,725 lbs. That doesn’t mean your carabiner can repeatedly lift something that weighs that much. You might be able to lift a truck once, but it would permanently damage your carabiner.

Remember, when you’re shopping for a carabiner, buy only those made by reputable companies (such as Black Diamond, Petzl, Metolius, etc.) and make sure it has a kN rating of at least 18.

Not sure which gear to buy? Need tips for maintaining your equipment? Click here to send in your questions for the Gear Guy. Selected questions will be answered here and in the printed magazine.