Can these explorers keep cool when their eyes play tricks on them and their headlamps go out? 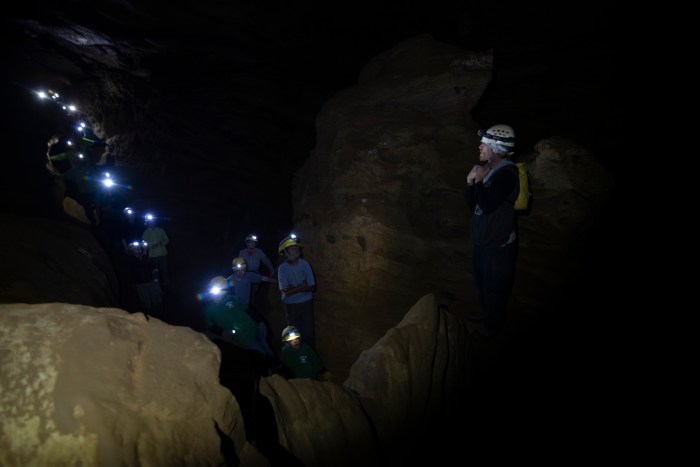 The group of Scouts and Venturers from Olney, Maryland, can’t believe their eyes.

After making their way deep underground through a cave called Laurel Caverns, they had just seen a golf ball roll uphill.

Was the lack of light playing tricks on their eyes?

Does the Earth’s magnetic field somehow work differently down below? Can we no longer trust gravity?

As it turns out, the group learned, it was an optical illusion. Basically, when you can’t see the horizon, it’s very difficult for your brain to tell if the ground is straight or sloped. It might have looked like the golf ball was rolling uphill, but in reality, the entire cave was slanted, meaning the ball was rolling downhill, just like it should.

The point was this: Wild caves are exciting, but you have to stay aware of your surroundings. Wear a helmet. Bring extra sources of light. Be Prepared to get dirty. 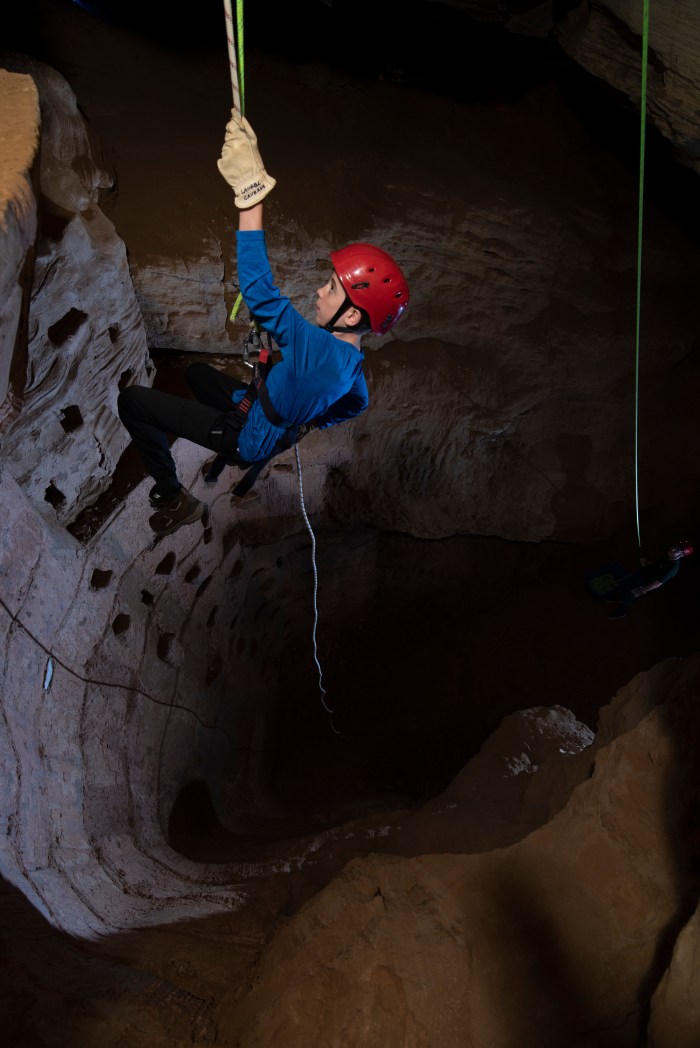 Part of Laurel Caverns, located in Farmington, Pennsylvania, is easy to explore. It’s well-lit and easy to walk through, and any member of the public of any age can show up for a guided tour.

The Scouts of Troop 264 and the Venturers of Crew 264, however, didn’t drive all the way from Maryland to be tourists. They made the trip for the spelunking: the exploration of wild caves.

As you get deeper underground at Laurel Caverns, things get tricky. Off the path of the guided tour is a maze of dark passages. Below that, there are huge rooms with no installed lighting and no handrails. And even deeper than that is around 1 mile of corridors that goes all the way to the bottom of Chestnut Ridge.

That’s what this group came for.

Actually, they did both. 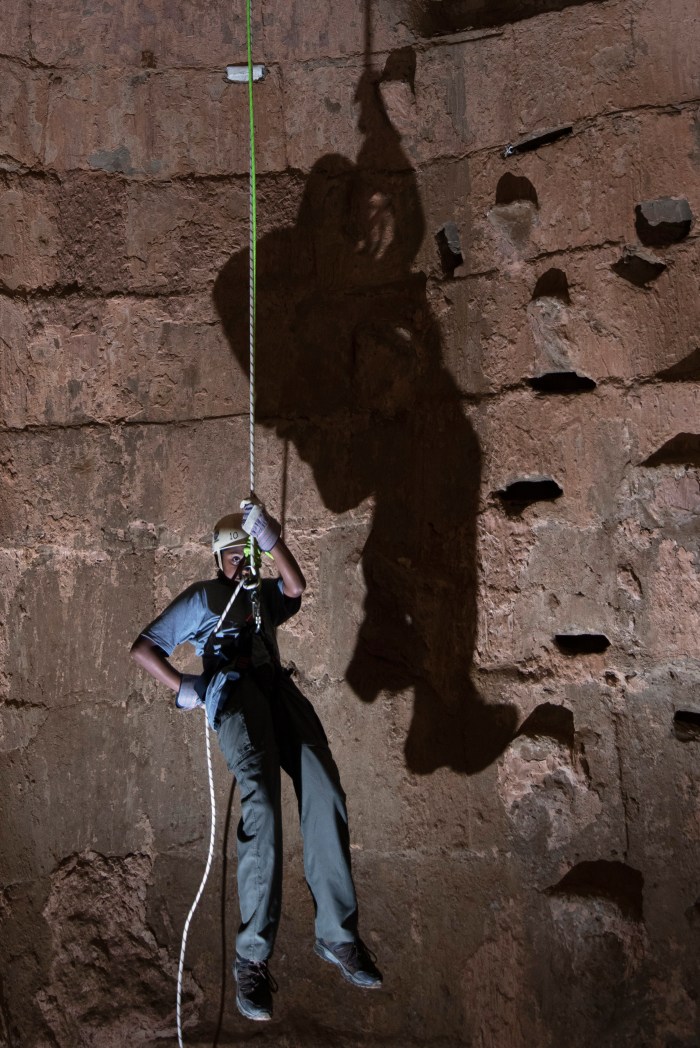 Wearing quick-dry clothing under rain gear, the group squeezed through some passages so tight that it made them wonder for a second how any person could get through.

Then they’d slip past an underground waterfall and walk through an underground room with a 40-foot ceiling before sliding through another crack in the wall, this time with a small stream of water underneath them.

The younger Scouts BSA members on the trip were restricted to the Upper Cave. It’s more difficult than the tourist area, but it’s easier to get around than the Lower Cave, while also still featuring plenty of excitement.

BSA caving rules require underground explorers to carry three sources of light — all the better to Be Prepared in case of dead batteries or bad light bulbs. It’s really, really dark down there, and if your headlamp goes out, you don’t want to be left in the dark for too long.

“The emergency training actually came in handy for me, in particular, when my headlamp went out,” 17-year-old Venturer Diana Wasson says. “Since they covered what to do if your light goes out, I didn’t panic and was able to retrieve my flashlight.”

Older Scouts had the opportunity to rappel down into yet another part of the cave. After an hourlong training session, the group suited up with ropes, harnesses and helmets.

Everyone got to rappel twice. For most of them, the second time was much easier.

“After you start rappelling down,” Ian says, “you’re like, ‘What was I afraid of?’ ” 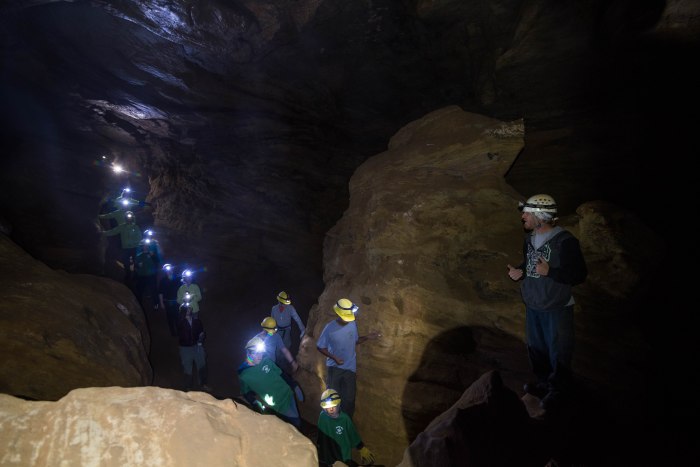 A “wild cave” is anything that is not commercially operated with a professional tour guide.

Scouting units participating in caving must follow the guidelines set forth in Cave Safely, Cave Softly.

Laurel Caverns is closed to the public from late October until the middle of April for bat hibernation season.

Why? Disturbing bats during their hibernation can be damaging to the animals. You wouldn’t want a random explorer stomping through your bedroom while you were sleeping, right?

A bat that wakes up during hibernation season might go out hunting for food. With no food available in winter, the bat would most likely die.

A disease called white-nose syndrome — a white fungus that grows on a bat’s nose — has already killed many of the insect-eating animals, so now people are trying to be extra careful.

Bats are extremely beneficial. A single bat can eat thousands of mosquitoes in one night.

Check out more photos from this adventure below. Then comment your answer to this question: Are you brave enough to rappel 40 stories?