Thousands of years ago, ancient astronomers observed the night sky and saw stars bunched together in what they called constellations.

Lots has changed since then, but those same constellations remain. In fact, the International Astronomical Union (IAU) has recognized 88 different constellations with no star appearing in more than one.

Stargazing is one of the best parts about camping in the remote wilderness.

Here are nine things you need to know about the night sky. 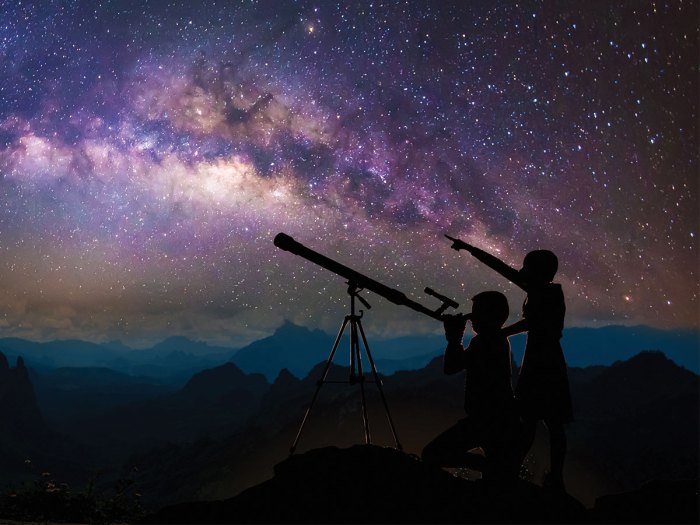 #1. THE RIGHT GEAR: BINOCULARS AND TELESCOPE

You don’t have to buy the fanciest binoculars around. Any decent pair will greatly increase what you can see, from moon craters to the colors of planets and the shapes of nebulae. Train your binoculars on the area of sky just above the spout of the teapot-shaped constellation Sagittarius, and you will be looking into the radiant heart of our galaxy — the Milky Way.

A small telescope can let you view Saturn’s rings, Jupiter’s great red spot (a giant storm) and the moons of several planets. Uranus and Neptune can be seen only with the aid of a telescope. 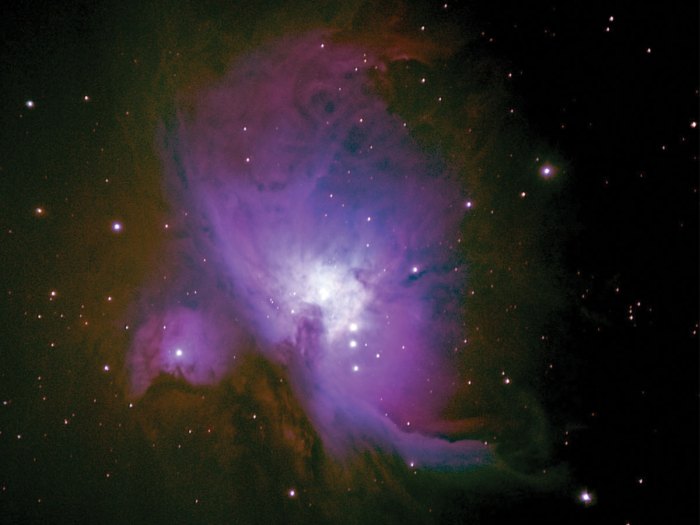 The largest known objects in the sky are great swirls of dust and gas called nebulae. Viewed with the naked eye, nebulae look like stars. With binoculars or a telescope, however, you can see spectacular displays of color and shape.

Stars are ranked according to magnitude — their brightness relative to one another. Sirius is a first-magnitude star and the brightest star visible from Earth. Many points of light we see in the sky are distant galaxies — great collections of stars and nebulae. 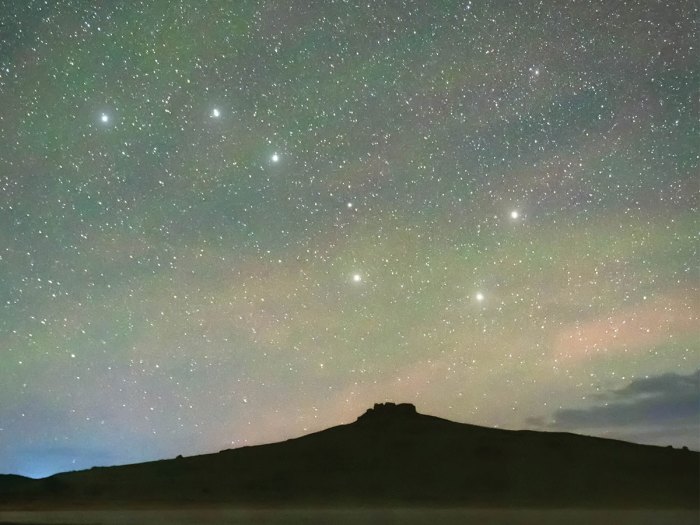 The Big Dipper is part of the Ursa Major constellation and contains one of the most familiar of all the star patterns you can see from North America. Look in the north sky (in fall or winter, you’ll need to look close to the horizon) for four stars shaped like a bowl and three stars that form its handle.

Once you’ve found it, you can find the North Star, too. Focus on the two stars in the bowl of the Big Dipper that are the farthest from the handle. Imagine a line connecting them and extending upward. Keep following it, and you’ll find the very bright North Star. The North Star is also the end of the handle of the Little Dipper.

One constellation that’s easy to spot in the south sky in winter is Orion, known in Greek mythology as the Great Hunter. Two bright stars mark its shoulders. Three small ones form the head and two more the legs. But it’s the three stars in Orion’s belt that are often the easiest to spot. (There are also three stars hanging from the belt that form a sword.)

Betelgeuse (pronounced beetlejuice) is a red star that emits 60,000 times more light than our sun and forms the hunter’s upper shoulder. Rigel, a blue-white star, is the brightest of the constellation’s stars and marks one of the hunter’s feet. 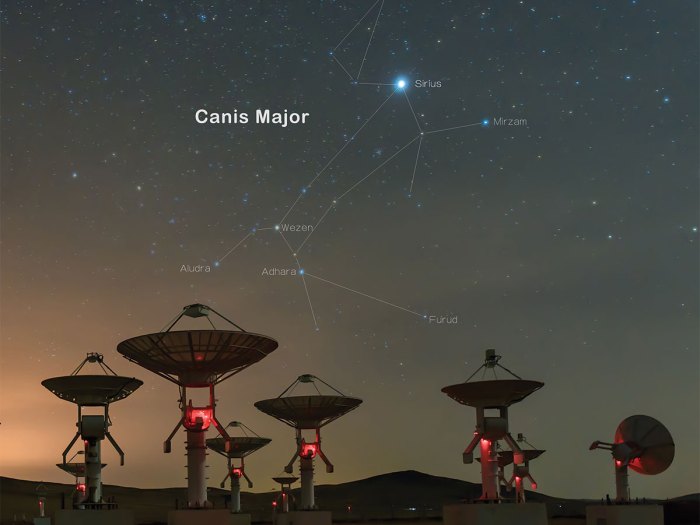 Two smaller constellations — Canis Major and Canis Minor, or big dog and little dog — represent Orion’s hunting companions. Canis Major, sitting at the hunter’s right heel, is the easiest one to find. Follow Orion’s belt east and toward the horizon. You will see Sirius, or the dog star, just above the horizon. Sirius marks Canis Major’s eye (or nose … or shoulder … you have to use your imagination!).

Orion’s other companion, Canis Minor, stands across from the hunter’s shoulders. The smaller dog is made up of just two stars, including Procyon, the eighth brightest in the night sky. 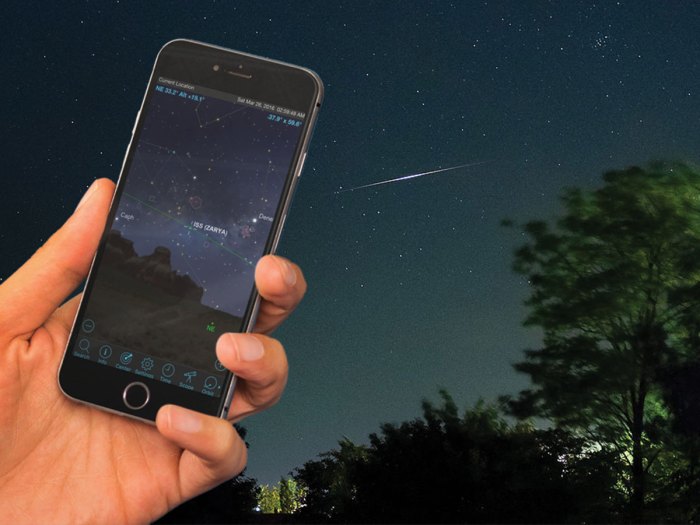 Road maps change only when new roads are built. Star maps, on the other hand, are always changing. As the Earth rotates, the stars move across the sky. And as the Earth moves around our sun, our view of the sky changes, as well. How to keep track of it all? With a star map.

You can find some star maps in your Fieldbook, or grab a trusted adult and look online. Apps can turn your smartphone into an interactive star map, while a planisphere is a printed map on a disk that you turn and rotate depending on your location and the time of the year. 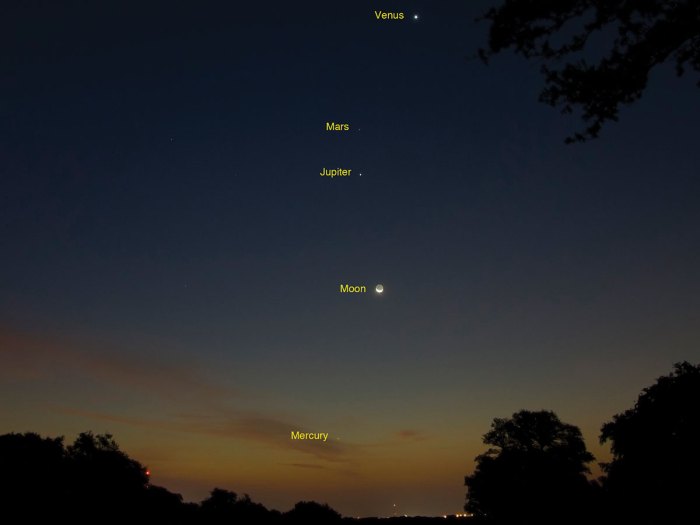 The brightest objects visible in the night sky are Mars, Venus, Jupiter and Saturn. Planets move around the sun at different speeds. When combined with Earth’s own movement, that means you can see different planets at different spots in the sky at different times of the year. Look online for up-to-date locations of the planets visible on any particular night in your area.

The fifth planet that you can view with the naked eye — Mercury — appears very faintly on the western horizon just after sunset. Uranus, Neptune and Pluto can be seen only with a telescope. 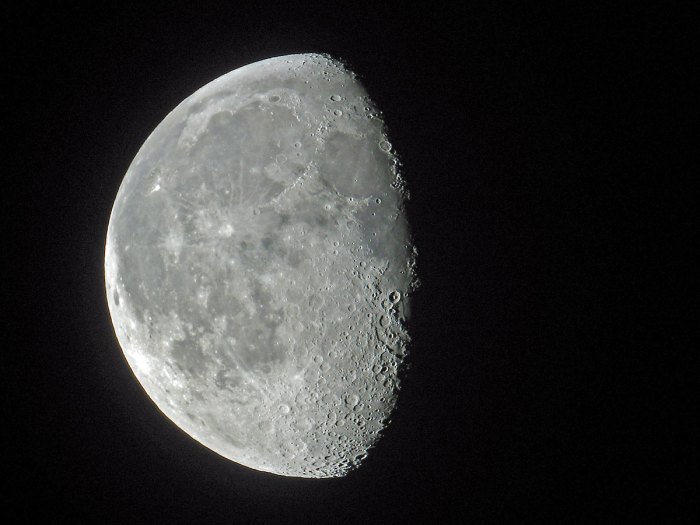 The moon revolves around Earth about once every 27 days. When the moon’s surface is increasingly lit by the sun over the span of a couple of weeks, it’s called “waxing.” When it darkens, it’s called “waning.” The easiest way to tell which moon you’re looking at: If the right side of the moon (as you face it) is reflecting light, the moon is waxing; when the right side is dark, the moon is waning.

With the help of binoculars or a telescope, you can see craters on the moon created by the impact of meteorites. 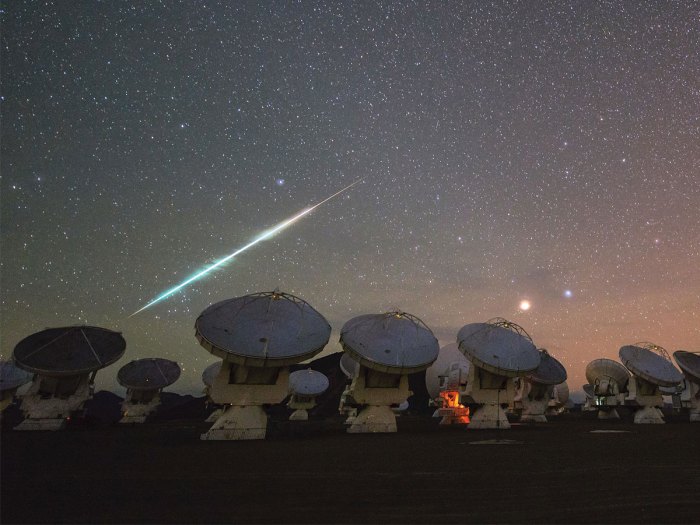 A meteor is a small chunk of material that lights up as it enters Earth’s atmosphere, which is how it gets the name “shooting star.” A meteorite is a meteor that survives its journey through the atmosphere and actually hits the ground.

If you’re camping in the wilderness with very little light pollution, trying staring at the sky and letting your eyes adjust. There’s a great chance that you’ll eventually see a shooting star or two. Once every few months, Earth experiences a meteor shower — a spike in the number of meteors streaking through the sky. The Geminid and Ursid meteor showers are viewable from the Northern Hemisphere in December.

LOOKING BACK IN TIME

Sirius is the brightest star in the night sky. At 8.6 light years away, it’s also one of the closest to Earth. But think about this: It takes 8.6 years for the light from Sirius to reach Earth. That means when you look at Sirius, you are seeing light that’s 8.6 years old. You’re looking back in time! What does Sirius look like at exactly this moment? We won’t know for another 8.6 years. (Spoiler: It will probably look the same.) The farther away a star is, the farther back through time you’re seeing.

Winter is a wonderful time for stargazing. Learn how to get started with our winter tours of the night sky at go.scoutlife.org/nightsky.