On a Sea Scout long cruise — defined as an on-the-water activity that lasts two or more weeks — everybody has a job to do. At the top of the list: Get along.

It’s not all about you and what you want and what benefits you the most. It’s about the crew, the ship, the entire team.

“The most difficult job was waking up for the 2 to 4 a.m. watches,” says 14-year-old Lee Murakami from Sea Scout Ship 2062 in Seattle, Washington. “At home, I would usually sleep until 10 a.m. during my summer vacation.”

Lee and the rest of his ship were about their vessel, the Propeller, for a three-week cruise from Seattle to Ketchikan, Alaska, and back again.

“Most of the time it was fun,” Lee says.

“If someone tells me to do something,” says 17-year-old Wolfgang Glocker, “I’ll go do it as best as possible.”

Your ship is counting on it. 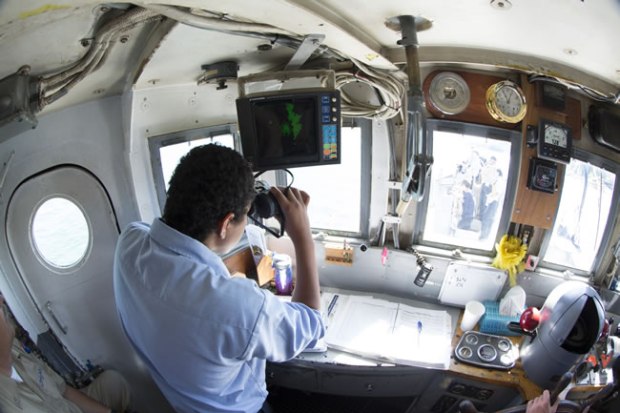 Ship 2062 is a mix of veteran Sea Scouts and first-timers. Lee had been with the unit for only six months before the Alaska cruise.

Leslie Kolke, the 17-year-old boatswain, had been on the Propeller for more than three years. Her mother is a Sea Scout leader. Her grandfather is the Skipper of the ship. And her great-grandfather was a Sea Scout, too.

“For years and years, we’ve thought about going to Alaska and sort of planned a trip to Alaska,” Leslie says, “and this year we finally did it, and it feels great.” 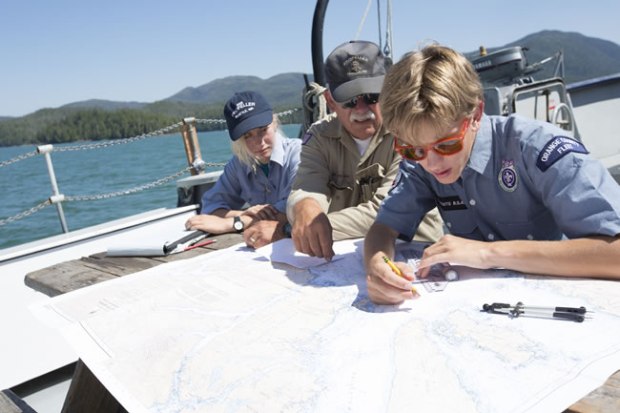 But this was not a pleasure cruise.

Most of the Scouts on board rotated between three jobs: stern watch, navigation and helm.

The job of the stern watch is to stand at the back of the boat (“stern” means the “rearmost part of a vessel”) and keep watch for anything and everything: objects in the water, people going overboard, possible collisions, and anything else that would be odd or out of place.

Navigation involves plotting courses, figuring out what time they’ll arrive at their destination and what time they need to leave, taking into account the tides and other variables. Some Scouts already had those skills. Some of them learned on the job.

And manning the helm might be the best job of them all: steering the boat while it’s underway. 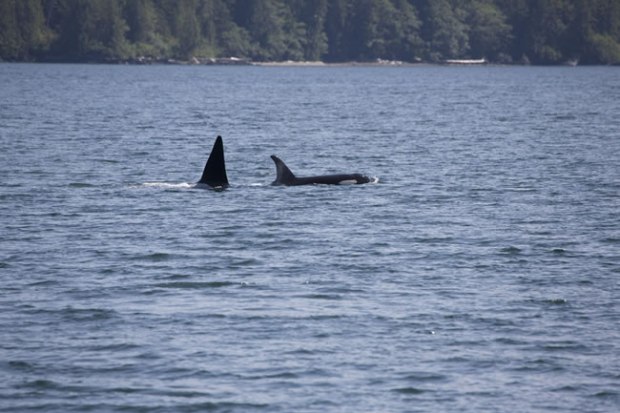 A lot can happen on a three-week cruise. The Scouts from Ship 2062 saw humpback whales and the incredibly gorgeous scenery of Washington state, British Columbia and Alaska. Dolphins and porpoises played at the ship’s bow. They stopped for a hike through the Alaska wilderness and went fishing under a sky of a million bright stars.

At random times, an adult would throw a buoy overboard and yell, “Man overboard!” The Scouts would then have to execute their man-overboard drill.

But when the trip was done, all the sights and sounds weren’t what they were talking about.

Instead, it was the time they spent together that stuck with them the most. 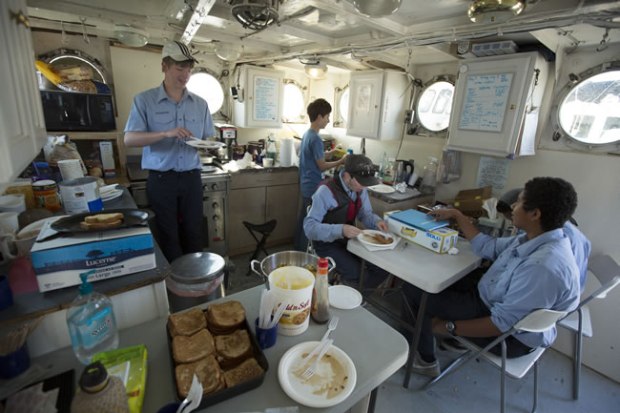 “I enjoyed seeing all the different characters on the boat and how we interacted with each other,” says 20-year-old crew member Trevor Moyes. “It’s quite unique.”

Yes, in spite of all the middle-of-the-night wakeup calls and long, long workdays, everybody seemed to get along fine.

“I really enjoyed how much the crew bonded together,” Leslie says. “It was more than I’ve ever seen before.

“Our crew ended up being very much like siblings — one big, smelly 15-person family.”

PHOTOS FROM THE LONG CRUISE

The Youth Training Boat Propeller is a 1952 Army vessel classified as a T-boat based on its size and capacity. It served as a cargo ship for decades before becoming a research vessel for the University of Washington. It was donated to the Sea Scouts in 1985 and has served Ship 2062 ever since.

It was chief engineer Nathan Miller’s job to see that the Propeller kept going on their three-week cruise. For the most part, it did, with just one small, stinky problem.

“As the engineer, I was amazed by how well that ship operated despite 60 years of service and 30-plus years at the hands of Sea Scouts,” says 20-year-old Nathan. “The only major problem I had was with the sewage [system].”

WHAT SEA SCOUTS IS ALL ABOUT 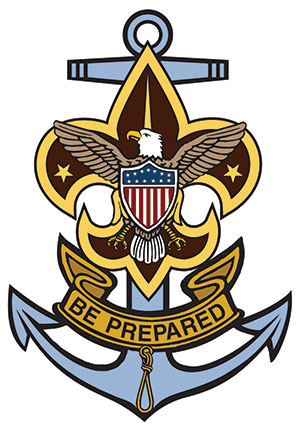 Sea Scouting was founded in 1912 to give members the opportunity to work on boating skills and to promote knowledge of our maritime heritage. From 1998 through February 2016, the Sea Scouting program was a part of Venturing. It’s now its own independent program within the BSA.

Sea Scout units, called “ships,” focus on sailing and cruising sailboats or power vessels, or on paddlesports. Sea Scouts learn to maintain and operate vessels, with a focus on learning the safe and proper methods of handling boats. Sea Scouts also learn the meaning of buoys and lights, how to take advantage of wind and tide, and how to
drop anchor or approach a dock.

To find a Sea Scout ship in your area, contact your local council service center or visit seascout.org.