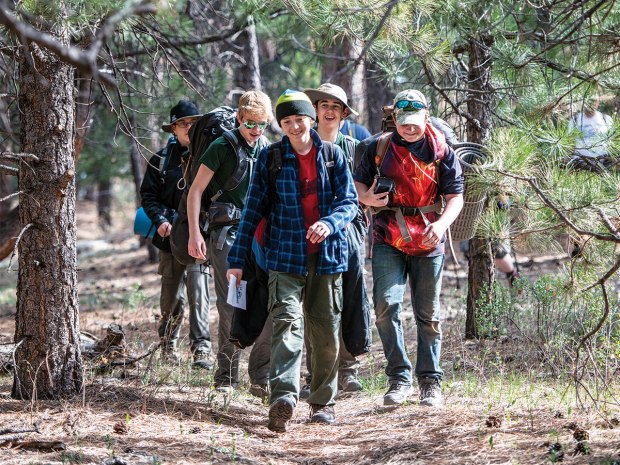 A patrol hikes to a Survivorman Challenge station, where they will be tested on their wilderness survival knowledge.

Your flight home turned into a disaster. The plane crashed in a dense forest during a storm. Fortunately, you survived, but now you’re cold, wet, thirsty and lost.

You scour through the plane wreckage and find a bottle of water. You guzzle down the refreshing drink and then start to move on. But wait — don’t throw away that bottle!

You can place your thumbs over part of the bottle cap’s underside and blow, creating a makeshift emergency whistle.

This is wilderness survival. It’s using your wits to make the most of what’s available to help you get home safely.

It’s what the Scouts in Troop 16 of Parker, Colorado, practice every year in their Survivorman Challenge.

SURVIVAL IS NO GAME

For nearly a decade, Troop 16 has held an annual wilderness survival campout at Peaceful Valley Scout Ranch, south of Denver. Since it’s springtime, the Scouts have a large part of the camp to themselves, including about 1,000 acres of undeveloped land. Each year, leaders plan a new theme — the Hunger Games, a military rescue mission, an ATV trip gone wrong. This time, it’s a plane crash.

Also this time around, survival expert Les Stroud will be there. He created the hit television series Survivorman, a show in which he survives for a week alone in remote places all over the world, sharing survival skills and how important it is to Be Prepared. 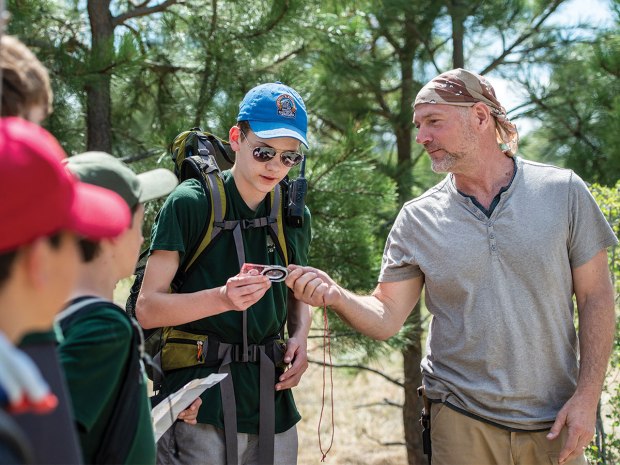 “Survival has never been about recreation; survival is about real-life skills,” Stroud says. “There are many skills to learn, and the Boy Scouts of America [is] touching on them all: navigation, how to set up a fire, shelter construction, first aid … ”

This campout, named in honor of Stroud’s show, is a competition; each patrol will earn or lose points based on its members’ skills and decisions. But the bigger prize is Scouts enhancing their knowledge of what to do should this be a real emergency.

While first-year Scouts stayed at base camp, older Scouts ventured into the backcountry, allowed to carry very little for their weekend in the woods. No tent. No sleeping bag. No mess kit. This wasn’t going to be comfortable.

“It was a little cold because we didn’t get a sleeping bag or a sleeping pad,” says Ian Baldwin, a 17-year-old Eagle Scout.

Maybe they could light a fire to stay warm? Sorry; the county was under a fire ban. It’s important to follow local laws. You’ve got to adapt to different situations. 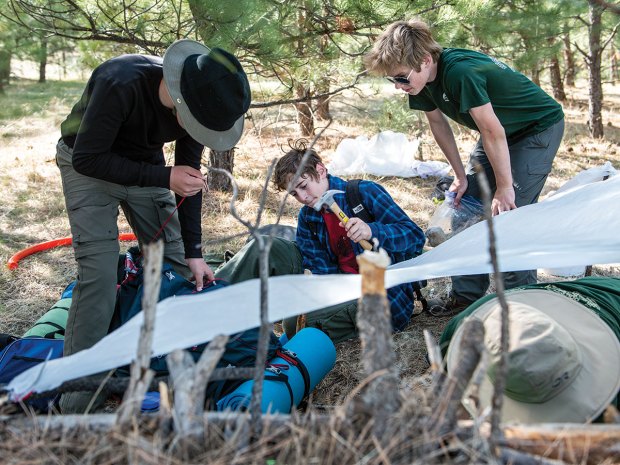 Scouts work on a shelter using sticks and plastic they collected.

So instead of worrying about not having a fire, the Scouts focused on building lean-to shelters out of tree branches and crawled inside for the night.

“You have to make sure your shelter is good,” 14-year-old Life Scout Josh Hilgartner says.

“Otherwise, if it rains, you’re going to get wet, and you don’t want that to happen.”

The next morning, the first-year Scouts set out to navigate a 5-mile orienteering course and practice knot tying, plant identification and first-aid skills as part of their challenge. Meanwhile, the older Scouts hiked to a fake plane crash site, where a couple of “injured” Scouts lie awaiting help. The Scouts quickly assess the area and move in to treat the — whoa! Is that a blood-covered bone sticking out of his arm? 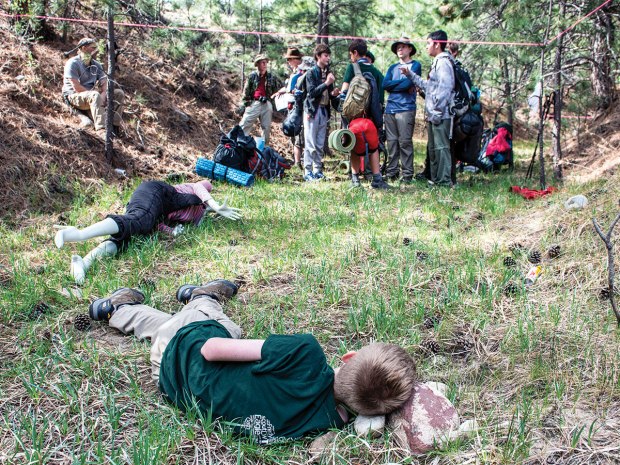 Scouts assess the scene of a “plane crash,” where “injured” Scouts await their help.

It sure looks like it. But it’s a fake bone and blood. Even though it looks gross, you’ve got to be brave; these Scouts need your help.

Calm the victims, stop the bleeding, treat for shock. First aid is a top priority in wilderness survival.

After the victims are bandaged up, the Scouts discover a note with coordinates indicating where the plane was headed. This could be helpful, considering that the plane was flying toward civilization. To get their bearings, the Scouts create a compass by magnetizing a sewing needle and floating it in water.

They head the right way and come across more plane wreckage they can use: a tarp for shelter, CDs for signaling, a few bottles of water and granola bars.

“The teamwork of my group surprised me; I thought we weren’t going to work super well as a team, but we got together and did it,” says Travis Payne, an 11-year-old Tenderfoot Scout. 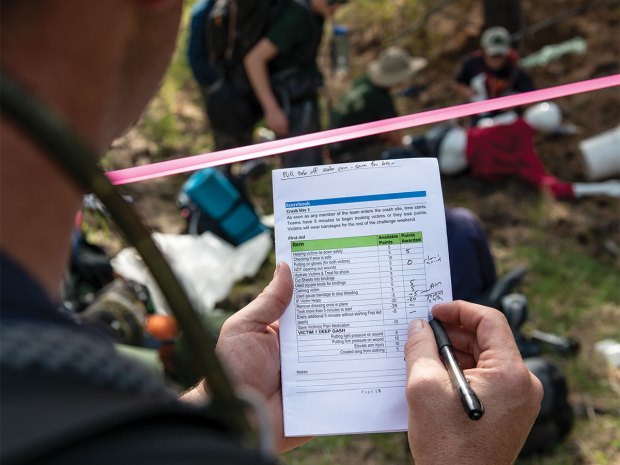 Adult leaders score Scouts on how well they know their stuff.

As part of the competition, the adult leaders keep score and reward the patrols when Scouts demonstrated proper survival techniques at various checkpoints. Identify edible plants, like dandelions and wild onion, and they’d win some spices to add flavor to their provided rabbit dinner. Tie a strong lashing at the knot-tying station, and they might get paracord to stabilize their shelter for the night. Explain how to start a fire with a 9-volt battery and steel wool, and they’d get a backpacking stove to cook the quail eggs they found.

Patrols also received points for reflecting sunlight with their CDs to signal adult Eagle Scout Trevor See, who piloted a Cessna 172 single-engine plane above the camp.

YOU CAN ENDURE ANYTHING

Scout Keaton Milerowski, 12, considers the Survivorman Challenge to be his favorite campout of the year other than summer camp.

“The challenges were fun because it was preparing you,” Keaton says. “It’s going to be useful in the future when you actually need it.” 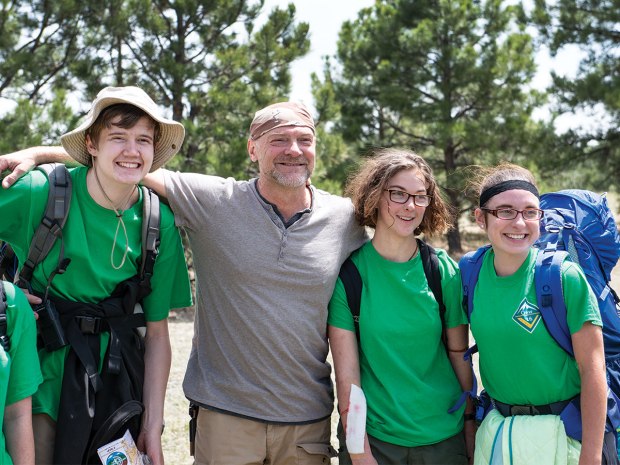 Les Stroud poses for a portrait with members of Venturing Crew 16.

Part of the challenge involved teamwork and maintaining a positive attitude. Those skills will prove extremely useful, not only in the wilderness, but in life.

“The first time I ever got a fire going just from the bush, my confidence level went through the roof,” Stroud says. “That is the magic of wilderness survival. It lends itself to building confidence within you for all the other things you’ll face in life.”

PHOTOS FROM THE SURVIVORMAN CHALLENGE

A patrol hikes to a Survivorman Challenge station, where they will be tested on their wilderness survival knowledge.

Adult leaders score Scouts on how well they know their stuff.

Tending to a “victim” during a wilderness first-aid challenge.

Scouts assess the scene of a “plane crash,” where “injured” Scouts await their help.

Scouts work on a shelter using sticks and plastic they collected.

Scouts and Les Stroud look over a map.

Injuries can be gruesome. This one is fake, but it looks real.

Don’t wander if you don’t know where you are. These Scouts stop and use their orienteering skills.

Pioneering skills are helpful when building a shelter.

Patrol members try to decide which one item to take with them to help them survive the night.

Les Stroud poses for a portrait with members of Venturing Crew 16.