When it’s so cold your eyelashes freeze and the snot inside your nose turns to ice, there’s only one thing to do:

“When you’re freezing and you only think of curling up in a ball to stay warm, someone telling you to run around the lake sounds insane,” says Jonah Painter, a 15-year-old from Troop 984 of Dardenne Prairie, Missouri. “However, it worked all the time.”

Insane? That’s how some people would describe this whole trip. Camping in northern Minnesota in January, with temperatures as low as minus 25 degrees: Let’s just say it’s not for everybody. 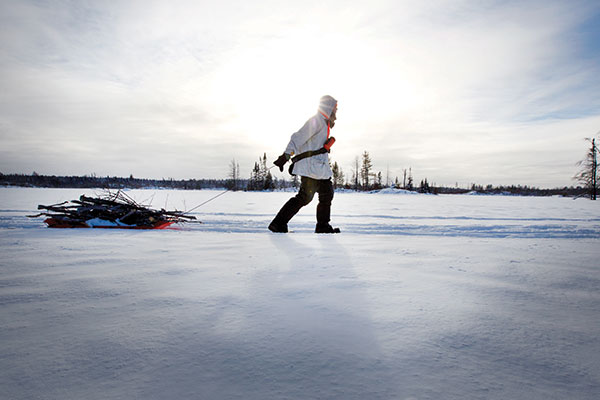 Each winter, Northern Tier National High Adventure Program welcomes hundreds of Scouts to its frozen lakes, gigantic pine trees and never-ending blanket of snow near Ely, Minnesota. The winter program, Okpik (pronounced “ook-pick”), is named after the Inuit word for snowy owl. The challenge is to live in below-zero temperatures for four days.

“I really wanted to go because it was more of an adventure,” says Jack Foster, 14, from Troop 50. “Unlike places where it’s warm and sunny — where as long as you don’t get sunburned you’re relatively safe.”

Preparation for Okpik begins months before the actual trip. The guys meet to figure out their travel schedule, elect a crew leader and take some training hikes.

A week before the trip, everyone brings his Okpik gear to the troop meeting and spreads it out. The campers make sure nobody is forgetting an essential piece of gear, like a flashlight or gloves, or bringing something they don’t need, like anything made of cotton. (When cotton gets wet, it actually makes you colder.)

“That meeting was probably the most important one,” Jonah says. “We could have used a few more hikes before our adventure to get familiar with our gear, but overall I think we were well prepared.”

They’ll find out pretty quickly. They begin their Okpik adventure with some safety lessons and another gear check. A trained staff member, called an Interpreter, makes sure they have everything they’ll need for the below-zero conditions.

Instead of carrying heavy backpacks, the guys pack their gear onto sleds (provided by Northern Tier) that they attach to themselves at the waist and drag behind them.Then they begin their hike toward camp — traversing deep snow, crossing frozen lakes and climbing rolling hills.

A PLACE TO CHILL

That also means you better get your quinzee — or manmade snow cave — up before dark. 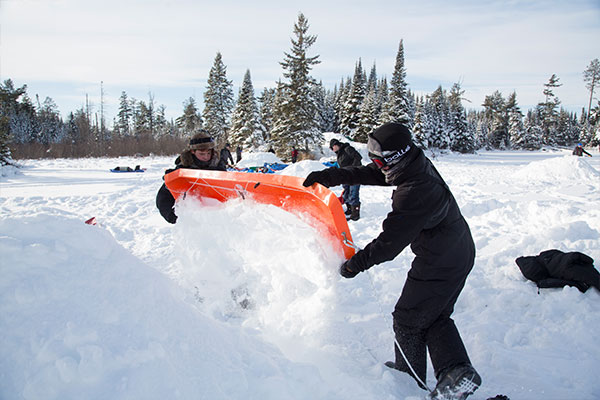 Describing how to build a quinzee is easier than actually building one. Pile a huge mound of snow and dig out the middle, leaving walls 1 to 2 feet thick. Sticks placed into the top and sides help ensure you don’t poke a hole in your shelter when building it.

“You will know how close you are to the edge of your quinzee when you find the end of a stick,” Jonah says. “The whole quinzee-making process can take about six hours, but they work fantastically and are definitely the coolest shelter I’ve ever slept in.”

Actually, quinzees are quite warm — much warmer than a tent. The snow works as a natural insulator.

With the quinzees assembled, the guys devote the remaining daylight to fun.

“Well, that is, if we could actually ski,” Jonah says. “Instead, it was more like cross-country crashing. I think we had more fun crashing into piles of snow than anything else.”

Nice bonus to all that moving around: It keeps you warm. 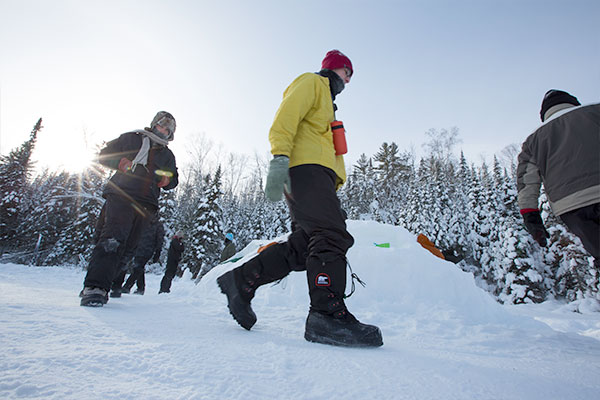 You can put on layer after layer of clothes, but that only traps existing heat. To make more heat, you need to move.

“If you weren’t moving, you would be cold,” says Brendon Hodges, a 17-year-old Eagle Scout from Troop 984. “If you kept moving and moved fast, you would warm up in a heartbeat.”

Your Interpreter is a cold-weather coach. He or she watches for signs of hypothermia and reacts right away. “He sees you shaking? You gotta run to the middle of the [frozen] lake and back,” says Caleb Postol, 16, from Troop 984. “You’re just standing there looking down? Go run up and down that hill there. It really did work.”

You might never feel thirsty when it’s this cold — even after running around for an hour. But you could still become dehydrated and get hypothermia.

That’s why everyone at Okpik must carry an insulated water bottle around his neck.

“We always had to have those on, or else we couldn’t participate,” Zion says.

Food is almost as important as water. Calorie-dense, high-fat foods give your body plenty of fuel to burn. “That means constant snacking,” Jonah explains.

The guys take breaks to eat Pop Tarts, energy bars and applesauce packets. At night, if they get cold while playing Risk, Sorry or Monopoly, the guys reach for snacks kept nearby.

After four days, it’s time for everyone to clear out the quinzees and head home. Goodbye, icicles the size of streetlights. Hello, hot showers and hot chocolate.

“We were all a little happy to feel warm again,” Jonah says, “but it was also sad seeing the end of our adventure.”

That’s OK; there will be many more. Because once you’ve lived inside a block of ice, you’re ready for anything life throws at you.

“No matter how bad you think the cold is, just go. Chances are, this is an adventure you will never experience again in your life,” Brendon says. “And Scouts gives you a chance to do things that most of your friends will never get to do.”

How to Recognize and Treat Hypothermia

What to do: Move the person into a shelter like a cabin or tent. Remove wet clothes and replace with warm, dry ones. If conscious, the person should drink warm liquids like soup or water.

For more warmth, fill water bottles with warm (not hot) water and wrap in a towel. The person can put those bottles under his arm pits or near the groin area.

If the person gets worse, call for help.